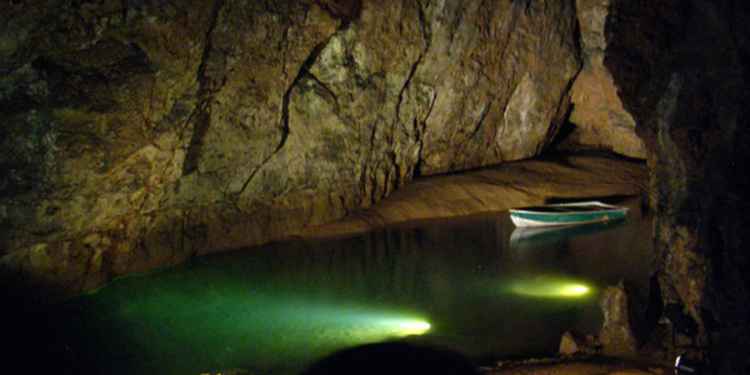 Photo: © Jim Champion
The famous show caves are well known for their paranormal activity and after recent reports of strange goings on, Wookey Hole are calling in interested members of the public to help hunt down the resident spooks.
The caves in Somerset are a vast network of impressive limestone chambers. Guests are taken on a guided tour through the atmospheric and well lit caves and given a fascinating account of their geological highlights and their uses through the years.
Wookey Hole is said to be haunted by its colourful past, most notably its former resident witch. She is said to have cursed a monk from nearby Glastonbury. He came to the caves in search of the witch in an attempt to break the curse. He splashed holy water on the cave walls, which is believed to have turned into the impressive stalagmites visitors can see in the caves today.
The search for the supernatural will take place on Saturday May 18th and organisers promise that the investigation will be conducted fairly and that everything will be 100% real and include absolutely no trickery.
Guests involved in the ghost hunt will be following in the footsteps of Yvette Fielding who investigated the caves in a 2009 episode of 'Most Haunted'. This time around the investigation is led by paranormal events company, Supernatural Tours and Events.
Speaking to Somerset Live, the hunt's organisers say that Wookey Hole is the perfect place for a paranormal experience. "We have chosen Wookey Hole because of its intense history and huge amount of reported strange occurrences," said the paranormal team's leader Andrew Frewing-House.
As you'd expect from a ghost hunt, the event includes the use of equipment and the type of paranormal experiments you've seen on television, such séances, table tipping, Ouija boards, dowsing rods and the use of psychic mediums.
Andrew added that the caves have "a well-known story about a witch who allegedly cursed a romance which led to the man becoming a monk and seeking revenge after his relationship fell apart. Both ghosts have been spotted in the caves."
Tags:
paranormaltopicalsomersetunderground