The creator of Nettleden.com, Steve Higgins was featured in The Times on 05/12/2003 talking about Urban Exploring, what it is, the attractions, the dangers and the legal aspects. 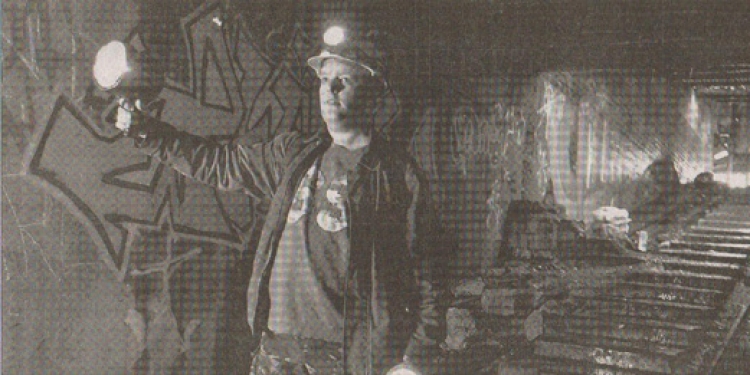 Out of sight: Urban explorer Steve Higgins avoids anti-trespass barriers and bats to descend into one of the abandoned tunnels near Bath that even people living nearby barely know exists.
Through sheeting rain, Steve Higgins struggles over piles of rusting metal in a wooded gully nicknamed Ammo Case Alley.
Just over the ridge lies a muddy slope which leads down to the secret entrance to his destination, a warren of underground passages and tunnels carved by long-dead quarrymen.
North Wiltshire is a magnet for self-styled urban explorers like Mr Higgins. The tunnels and quarries were used to store tens of thousands of tonnes of ammunition during the Second World War. Beneath the gently rolling hills between Bath and Corsham lie more than 200 acres of an underground world that most of those who live above it are barely aware of.
Mr Higgins’s destination is Brown’s Folly mine, an underground quarry that supplied much of the honey-coloured stone with which Bath was built. The long-abandoned mine workings near the village of Monkton Farleigh are a maze that has fascinated him since he first discovered it two years ago.
Until recently access was relatively easy through one of the many narrow entrances that emerge from the rocky outcrop beneath the 19th-century tower that gives the mine its name.
Since then most of the openings have been barred to deter intruders who might disturb the bats living in its dank tunnels. But Mr Higgins knows another way in, bypassing both the bats and iron gates, and has explored most of the long-abandoned workings.
His expeditions are meticulously recorded using a digital camera and then logged on his internet website for other urban explorers to read.
It was thanks to the internet that the 23-year-old supermarket worker realised he was part of one of the fastest growing underground activities in Britain.
He said: "I started posting pictures on my website and other people with similar interests began to make contact. Now we have a group that meets regularly to explore new places."
Mr Higgins admits that a large part of the attraction is visiting places other people do not want them to go. He said: "It’s like playing on building sites when you’re a kid. You’re not supposed to do it but it’s fun, so you do it anyway.
"My interest is in exploring underground but I also like old mental hospitals because they are spooky and have great atmosphere."
He added: "We usually meet up a couple of times a week to go exploring. There are a lot of places still to be discovered."
By Simon de Bruxelles
Tags:
undergroundurbex