An article in Venue Magazine featuring Nettleden creator Steve Higgins looking to the reason why people in the Bristol and Bath areas like to explore forgotten underground places. 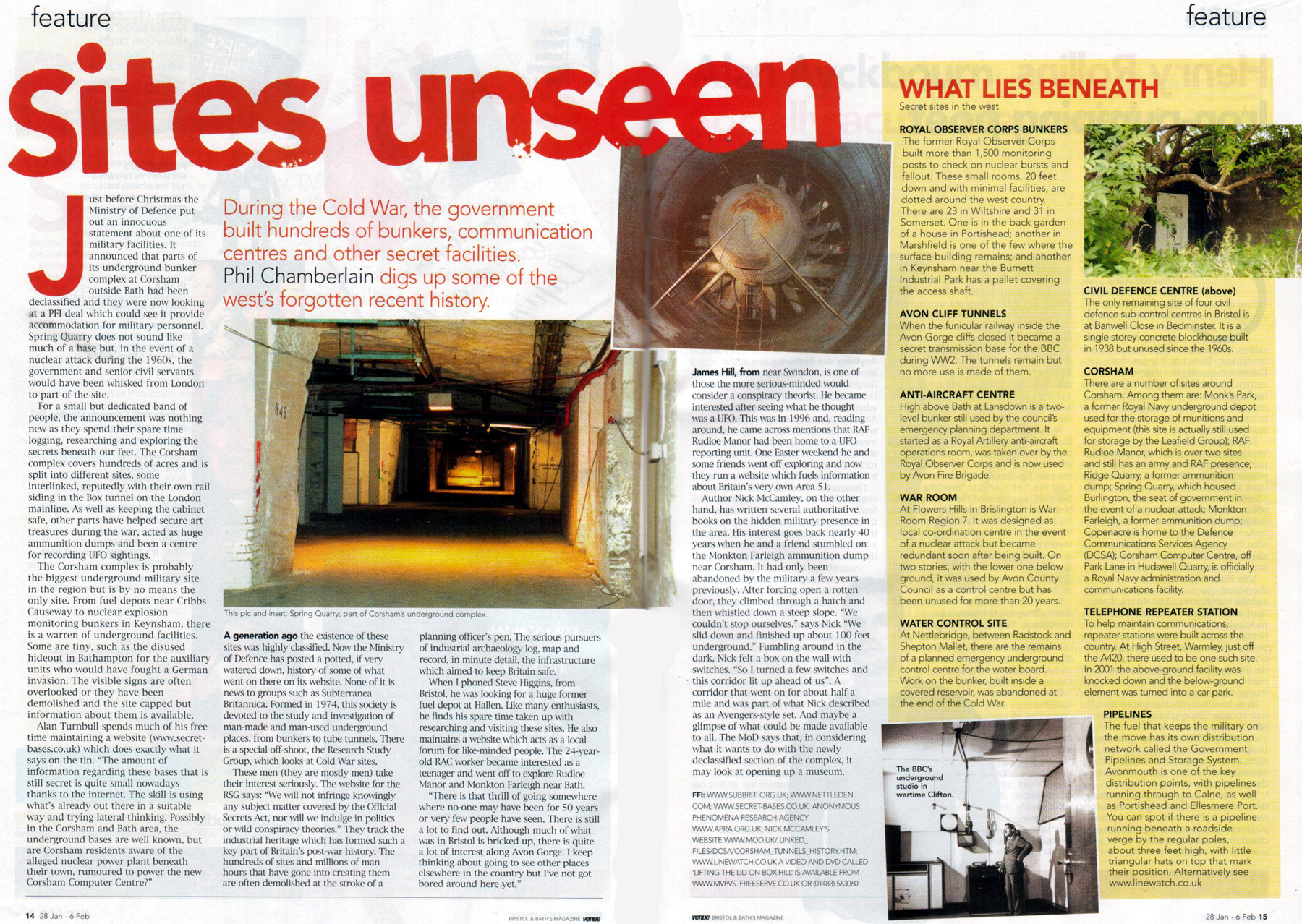 During the Cold War, the government built hundreds of bunkers, communication centres and other secret facilities. Phil Chamberlain digs up some of the west’s forgotten recent history.
Just before Christmas the Ministry of Defence put out an innocuous statement about one of its military facilities. It announced that parts of its underground bunker complex at Corsham outside Bath had been declassified and they were now looking at a PFI deal which could see it provide accommodation for military personnel. Spring Quarry does not sound like much of a base but, in the event of a nuclear attack during the 1960s, the government and senior civil servants would have been whisked from London to part of the site.
For a small but dedicated band of people, the announcement was nothing new as they spend their spare time logging, researching and exploring the secrets beneath our feet. The Corsham complex covers hundreds of acres and is split into different sites, some interlinked, reputedly with their own rail siding in the Box tunnel on the London mainline. As well as keeping the cabinet safe, other parts have helped secure art treasures during the war, acted as huge ammunition dumps and been a centre for recording UFO sightings.
The Corsham complex is probably the biggest underground military site in the region but is by no means the only site. From fuel depots near Cribbs Causeway to nuclear explosion monitoring bunkers in Keynsham, there is a warren of underground facilities. Some are tiny, such as the disused hideout in Bathampton for the auxiliary units who would have fought a German invasion. The visible signs are often overlooked or they have been demolished and the site capped but information about them is available.
Alan Turnbull spends much of his free time maintaining a website (www.secret-bases.co.uk) which does exactly what it says on the tin. "The amount of information regarding these bases that is still secret is quite small nowadays thanks to the Internet. The skill is using what's already out there in a suitable way and trying lateral thinking. Possibly in the Corsham and Bath area, the underground bases are well known, but are Corsham residents aware of the alleged nuclear power plant beneath their town, rumoured to power the new Corsham Computer Centre?"
A generation ago the existence of these sites was highly classified. Now the Ministry of Defence has posted a potted, if very watered down, history of some of what went on there on its website. None of it is news to groups such as Subterranean Britannica. Formed in 1974, this society is devoted to the study and investigation of man-made and man-used underground places, from bunkers to tube tunnels. There is a special off-shoot, the Research Study Group, which looks at Cold War sites.
These men (they are mostly men) take their interest seriously. The website for the RSG says "We will not infringe knowingly any subject matter covered by the Official Secrets Act, nor will we indulge in politics or wild conspiracy theories? They track the industrial heritage which has formed such a key part of Britain's post-war history. The hundreds of sites and millions of man hours that have gone into creating them are often demolished at the stroke of a planning officer's pen. The serious pursuers of industrial archaeology log, map and record, in minute detail, the infrastructure which aimed to keep Britain safe.
When I phoned Steve Higgins, from Bristol, he was looking for a huge former fuel depot at Hallen. Like many enthusiasts, he finds his spare time taken up with researching and visiting these sites. He also maintains a website which acts as a local forum for like-minded people. The 24-year-old call centre worker became interested as a teenager and went off to explore Rudloe Manor and Monkton Farleigh near Bath.
"There is that thrill of going somewhere where no-one may have been for 50 years or very few people have seen. There is still a lot to find out. Although much of what was in Bristol is bricked up, there is quite a lot of interest along Avon Gorge. I keep thinking about going to see other places elsewhere In the country but I've not got bored around here yet."
James Hill from near Swindon, is one of those the more serious-minded would consider a conspiracy theorist. He became interested after seeing what he thought was a UFO. This was in 19% and, reading around, he came across mentions that RAF Rudloe Manor had been home to a UFO reporting unit. One Easter weekend he and some friends went off exploring and now they run a website which fuels information about Britain's Very own Area 51.
Author Nick McCamley, on the other hand, has written several authoritative books on the hidden military presence in the area. His interest goes back nearly 40 years when he and a friend stumbled on the Monkton Farleigh ammunition dump near Corsham. It had only been abandoned by the military a few years previously. After forcing open a rotten door, they climbed through a hatch and then whistled down a steep slope. We couldn't stop ourselves," says Nick We slid down and finished up about 100 feet underground." Fumbling around in the dark, Nick felt a box on the wall with switches. "So I turned a few switches and this corridor lit up ahead of us". A corridor that went on for about half a mile and was part of what Nick described as an Avengers-style set. And maybe a glimpse of what could be made available to all. The MoD says that, in considering what it wants to do with the newly declassified section of the complex, it may look at opening up a museum.

Secret Sites In The West

ROYAL OBSERVER CORPS BUNKERS
The former Royal Observer Corps built more than 1,500 monitoring posts to check on nuclear bursts and fallout. These small rooms, 20 feet down and with minimal facilities, are dotted around the west country. There are 23 in Wiltshire and 31 in Somerset. One is in the back garden of a house in Portishead; another in Marshfield is one of the few where the surface building remains; and another in Keynsham near the Burnett Industrial Park has a pallet covering the access shaft.
AVON CLIFF TUNNELS
When the funicular railway inside the Avon Gorge cliffs closed it became a secret transmission base for the BBC during WW2. The tunnels remain but no more use is made of them.
ANTI-AIRCRAFT CENTRE
High above Bath at Lansdown is a two-level bunker still used by the council's emergency planning department. It started as a Royal Artillery anti-aircraft operations room, was taken over by the Royal Observer Corps and is now used by Avon Fire Brigade.
WAR ROOM
At Flowers Hills in Brislington is War Room Region 7. It was designed as local co-ordination centre in the event of a nuclear attack but became redundant soon after being built. On two stories, with the lower one below ground, it was used by Avon County Council as a control centre but has been unused for more than 20 years.
WATER CONTROL SITE
At Nettlebridge, between Radstock and Shepton Mallet, there are the remains of a planned emergency underground control centre for the water board. Work on the bunker, built inside a covered reservoir, was abandoned at the end of the Cold War.
feature
CIVIL DEFENCE CENTRE
The only remaining site of four civil defence sub-control centres in Bristol is at Banwell Close in Bedminster. It is a single storey concrete blockhouse built in 1938 but unused since the 1960s.
CORSHAM
There are a number of sites around Corsham. Among them are: Monk's Park, a former Royal Maw underground depot used for the storage of munitions and equipment (this site is actually still used for storage by the Leafield Group); RAF Rudloe Manor, which is over two sites and still has an army and RAF presence; Ridge Quarry, a former ammunition dump; Spring Quarry, which housed Burlington, the seat of government in the event of a nuclear attack; Monkton Farleigh, a former ammunition dump; Copenacre is home to the Defence Communications Services Agency (DCSA); Corsham Computer Centre, off Park Lane in Hudswell Quarry, is officially a Royal Navy administration and communications facility.
TELEPHONE REPEATER STATION
To help maintain communications, repeater stations were built across the country. At High Street, Warrnley, just off the A420, there used to be one such site. In 2001 the above-ground facility was knocked down and the below-ground element was turned into a car park.
PIPELINES
The fuel that keeps the military on the move has its own distribution network called the Government Pipelines and Storage System. Avonmouth is one of the key distribution points, with pipelines running through to Caine, as well as Portishead and Ellesmere Port. You can spot if there is a pipeline running beneath a roadside verge by the regular poles. about three feet high, with little triangular hats on top that mark their position. Alternatively see www.linewatch.co.uk
Tags:
undergroundurbex