British Museums Have Been Sharing Their Creepiest Objects Online 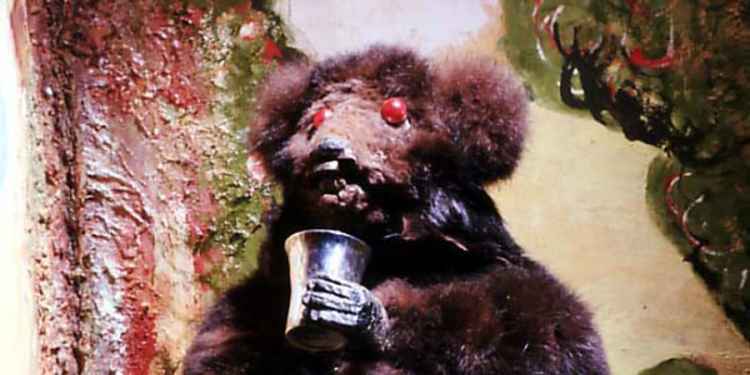 Photo: © @PenshurstPlace
Museums around the UK have taken to Twitter in a giant 'curator battle' as they went head-to-head sharing photos of their collection's creepiest objects.
It all started when the Yorkshire Museum called up fellow museums in the #curatorbattle. They wrote "today's theme, chosen by you, is #CreepiestObject. We're kicking things off with this 3rd/4th century hair bun from the burial of a Roman lady, still with the jet pins in place..."

MUSEUMS ASSEMBLE! It's time for #CURATORBATTLE! 💥

Today's theme, chosen by you, is #CreepiestObject!

We're kicking things off with this 3rd/4th century hair bun from the burial of a #Roman lady, still with the jet pins in place...

CAN YOU BEAT IT? 💥 pic.twitter.com/ntPiXDuM6v

With the challenge, "can you beat it?" The tweets started rolling in with photo of other weird objects in exhibits in museums around the country. The items being showcased online included creepy dolls, freaky looking mermaids, and even a witch in a bottle.
Egham Museum tweeted a photo of a truly disturbing old doll, saying "just when you thought it couldn’t get any worse, we present..."

Just when you thought it couldn’t get any worse, we present ....

But was this doll more or less weird than this terrifying drinking bear that can be found at the Toy Museum at Penshurst Place in Kent?

Live from the Toy Museum of Penshurst Place, we present the Drinking Bear. Feed it a 2 pence piece and it'll pretend to drink from its cup as it stares into your soul. #CuratorBattle #CreepiestObject pic.twitter.com/ohNl2974UJ

Then the Centre of Ceramic Art (CoCA) at York Art Gallery showcased these two very odd voodoo-like dolls. The strange artefacts clearly appeared to the dark side of 'Most Haunted' presenter Yvette Fielding, who was prompted to tweet "ooo I like!" in response.

Things then got a lot weirder when the Natural Sciences department of National Museums Scotland tweet photos of a very odd-looking and not very convincing mermaid. It's just plain weird.

Norwich Castle shared a photo of a weird pincushion complete with tiny children's heads sticking out of it, which they say has already given a few of their followers nightmares.

@RedHeadedAli how can we ignore such a call to arms?

This particular item has caused a few nightmares for our followers this week.

Then Dan Hicks, Professor of Contemporary Archaeology at Oxford University, jumped into the conversation with a photo of a silvered stoppered bottle which is said to have an actual witch trapped inside of it.

The mention of witchcraft prompted some to start sharing photos of some of the occult artefacts on display at the Museum of Witchcraft & Magic in Boscastle, Cornwall.

some #CreepiestObject i've still got photos of from the Museum of Witchcraft and Magic pic.twitter.com/WkmuEf6hFR

These aren't the only weird objects on display at museums in the UK. In fact, there are at least three museums that specialise in the unusual. As well as Boscastle's Museum of Witchcraft, there's also two haunted museums.
The Haunted Antiques Paranormal Research Centre is a hand-ons collection of haunted artefacts in Hinckley, Leicestershire. There's also the Old Picture House & Haunted Museum, a collection of unusual items housed in a historic former cinema in Nottingham.
Add A Comment