This article is more than three years old and was last updated in July 2021. 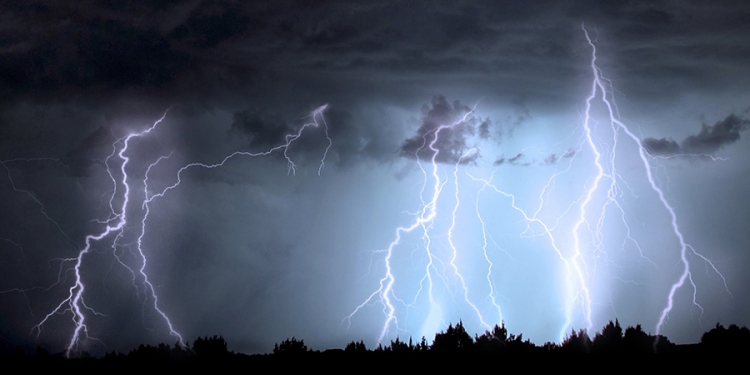 Photo: pixabay.com
It's commonly said within the paranormal community that hauntings occur as a result of psychic or spiritual energy, so could the massive amounts of energy generated by a lightning strike cause a spike in paranormal activity?
The simple answer: Depending on what you believe, yes. However it would probably create no greater increase than your nearest radio transmitter. Keep reading to delve deeper into the science of the paranormal relating to thunderstorms.
There are anecdotal claims that more paranormal incidents are reported during thunderstorms, but it's hard to validate this claim as there is no international, or even national, body that collates and monitors reports of the paranormal. There are no official figures to back this up.
Paranormal investigators think that the lingering energy of a living human can exist outside the body after death and that spirits draw on any source of energy in order to replenish them. This could include feeding on the energy from electrical circuits, batteries and even the energy discharged during a thunderstorm.
The problem is, no one knows for sure exactly what type of energy spirits consist of. A very commonly used tool in the paranormal field is an electromagnetic field (EMF) meter. They alert you when they detect an electromagnetic field with a wavelength ranging from about 14km to 6,000km.
Lightning strikes in a wavelength band around 777 nanometers, which is in the near-infrared region of the electromagnetic spectrum. This is the other end of the scale to the very low frequency energy that paranormal investigators attempt to detect with EMF meters.
If you believe that the spirit energy we leave behind is the lingering electrical energy from within our brains, then it's hard to understand how lightning could affect it. Brainwaves have an even lower wavelength than those picked up by an EMF meter, about 20,000km placing them in the super low frequency band of the EM spectrum.
Whether you believe that spirit energy is the result of residual brainwaves, or that it exists in a frequency range that can be detected by an EMF meter, one thing that is clear is that the energy of ghosts is of a much lower frequency than lightning.
It's not that a lightning bolt doesn't generate enough energy to fuel the paranormal, it's just that the type of energy is very different. It would be like putting diesel in a petrol car.
A strike of lightning delivers about one billion joules of energy, which is enough to power a 60 watt lightbulb for six months, but that electrical energy lasts milliseconds and the majority of it is converted into other forms of energy before a ghost could get its ethereal hands on it.
Although lightning occurs due to a massive electrical charge, most of this energy is lost as it travels through the air from the cloud to the ground. The energy is converted into the bright flash of light that we see and a lot of infrared energy including heat which superheats the air around it. A lot of energy is also lost through the mechanic that creates the shockwave that we hear as thunder.
Lightning also produces pulse of interference across the whole electromagnetic spectrum, which is why you hear lightning strikes interfere with your radio. This means energy will be released spanning all frequencies from radio waves to high energy x-rays and gamma rays. So, whatever frequency spirits exist at they'd get a hit of this energy.
However, because this pulse is spread out across the whole EM spectrum it will be much weaker than the overall power of the strike. Plus the energy radiates from the point of a lightning strike in all directions. As the energy spreads out it becomes more diluted.
This means that at any given narrow band of frequencies, whatever this frequency range might be for ghosts, the power isn't going to be any more powerful than your nearest radio, television or mobile phone mast. Whereas a lightning strike lasts for a fraction of a second, transmitters are constantly pumping EM out in to the area around them - and for all we know, this could power hauntings too.
In fact, some paranormal investigators use a device called an EM pump during investigations which produces a constant electromagnetic field. Even this is likely to kick out more localised energy than lightning, unless you're directly under a storm.
Another possibility is just that ghosts come out to watch the storm in the same way we do. Perhaps they're simply awoken by the loud crashes of thunder and flashes of light. The living can't resist moving to the nearest window to watch a good storm, so why should the dead be any different?
The best way to find out if lightning really does affect the amount of paranormal activity is to test the theory yourself. You probably don't want to go hunting in the middle of a thunderstorm, but the next time lightning strikes nearby, why not. grab your ghost hunting tools and see what you find.
It's not just thunderstorms that are said to affect the paranormal. In the UK last summer an extended heatwave was blamed for a spike in reports of paranormal activity.