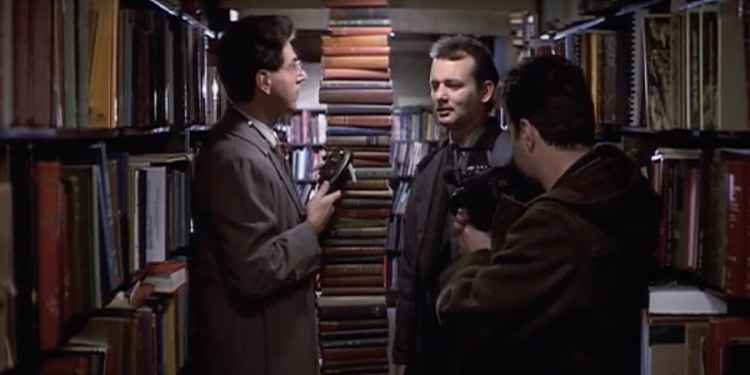 Real-life paranormal investigators Amy McCain and Frankie Fronk react to the original 1984 'Ghostbusters' movie and compare it to real ghost huntings methods.
In a 10 minute video clip, the pair start by watching a scene from early in the movie when the boys in grey investigate the New York Public Library after a librarian reported seeing a ghost sighting and witnessing poltergeist activity.
An excited Amy says "best line ever" after Dr. Peter Venkman played by Bill Murray encounters an unusual pile of books in the library and tells his colleagues "no human being would stack books like this."
Amy and Frankie talked about the similarities between the library scene and their first investigations. Although neither of them encounter an ectoplasm, Frankie did tell us that the Ghostbuster's PKE meter, which for some reason he calls a "giga meter", is very similar to a real-life ghost hunting tool called a REM-Pod.
Frankie says, "this is actually quite close to one of the paranormal tools that we use in the real field. You put your REM-Pod down on the floor, if there is an entity around, if it moves around the REM-Pod's lights will light up."
The ghost hunters watch as their on screen counterparts encounter a full-torso apparition. Frankie says, "the librarian in this scene right here is the holy grail of paranormal activity, it's an intelligent haunting, it's a full-bodied apparition."
In the scene the Ghostbusters have no idea what to actually do now they've encountered a real ghost, Ray suggestion is "get her!" and the team lung for the ghost and actually touched the etheric plane. Amy says this isn't the approach she'd take, "I would start by saying hello. These were people and you do catch more flies with honey than vinegar, even with the dead."
Next we see the Ghostbusters attempting to capture Slimer at the posh, Sedgewick Hotel. Amy admitted, "I've never investigated a hotel that was haunted before, but I have done a brothel."
According to Amy, hauntings in real-life hotels are actually pretty common too. She says, "there are a lot of haunted hotels in the world, because a lot of stuff happens in hotels. Traumatic events can create a lot of energy, so you can end up getting residual hauntings as well as intelligent hauntings."
But what's the difference between a residual and intelligent haunting? Frankie explains, "a residual haunting is kind of like we just see the lady walking and then it like gets reversed, it's just a recording, a piece of energy left behind. Intelligent hauntings, they can communicate with you, they hear you, they see you."
But he warns wannabe ghost hunters that encounters with intelligent hauntings can be risky, "even being as fascinating as they are, they can also be extremely dangerous."
Although it's hard to imagine that the dangers of real life ghost hunting is anywhere near as severe as the world of the Ghostbusters, who use a proton weapon driven by an unlicensed nuclear accelerator to dispatch ghosts.
Amy tells us the reality of dealing with ghosts is much less exciting, "in order to get rid of a ghost like Slimer, we would do more of like house cleansing, which involves smudge sticks made up of white sage, sweetgrass and cedar."
Amy sums up the similarities by saying, "it relates to paranormal investigation in the real world... not as many explosions unfortunately, but they do a lot of research, we do a lot of research. They have tools, we have tools. It's great, just not as glamorous."
Frankie adds, "this movie, I admire. This is the reason why I do what I do today and it's going to be enjoyed by future audiences for eons to come."