My Ghost Hunt At Guy's Cliffe House With Haunted Happenings

I was warned on my first organised Haunted Happenings ghost hunt that I would "get the bug" and since then I've booked myself on to two more paranormal events with the company, the first of which was on Saturday night in Warwickshire.

We drove up the long driveway of Guy's Cliffe House just before 9pm on Saturday evening for a six hour ghost hunt in the grade II listed building. As we neared the carpark at the top of the drive, the first thing we saw was the ruins of the former manor house which dates back to 1751 but fell in to disrepair in the 1950s.
We gathered outside the house in the dark, along with the rest of guests, there were around thirty of us in total. There was a good ratio of believers and skeptics, and we were a pretty mixed group of people including friends, mothers and daughters and even a stag party.
Behind the ruins was an adjoining building, St Mary's Chapel. The basement of this chapel used to include the house's servants' quarters. We were led into the chapel on the ground floor where we met Natalie, Caroline, and Terry from Haunted Happenings who were leading the event. 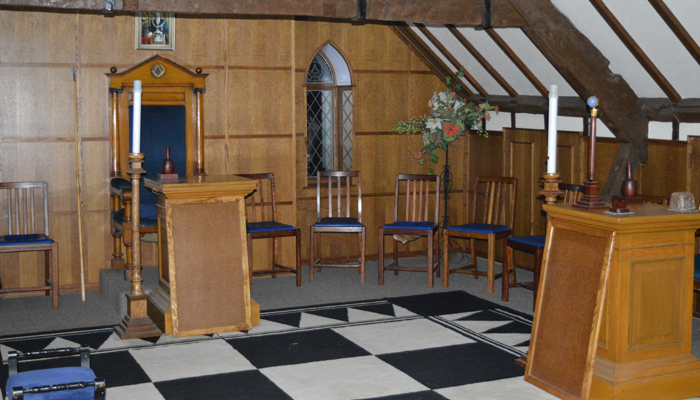 When you imagine a haunted house, the image you conjure up in your head won't be far off Guy's Cliffe, it's the typical haunted house. It has dungeons, winding stir cases, creepy portraits, dark corners, creaking doors, an imposing clock tower, gothic windows and lots and lots of history.
During a tour of the main areas of the building, we learnt that the house gets its name from the legendary Guy of Warwick who's believed to have lived in a cave carved into the sandstone cliff that the house was built on. The chapel was built on the site in the 15th century but was passed into private hands after King Henry VIII disbanded monasteries, priories, convents and friaries in the UK.
According to our tour guide, Adrian who's the caretaker of the site, the house itself was used as a hospital during World War I and was again put to use in the Second World War, this time as a school for evacuated children.
In the 1970s, the chapel was restored by the Freemason. Today the two Freemason temples contained in the chapel are decorated with eerie Masonic symbols and objects and are used for their ceremonies.
All this makes Guy's Cliffe a great place for a ghost hunt. Previous visitors have reported making contact with the spirits of Freemasons, children, and servants from the house. Most of the spirits are said to be male as historically the site is quite male dominated.
At one point in its life, part of chapel was used as a brewery and some mischievous ghosts known as the "Brewery Boys" are said to haunt this area. While out in the grounds a mischievous stable boy called Jacob has been witnessed in the coachhouse which is carved into the rock of Guy's Cliffe.
We had until 3am until track down a spook... 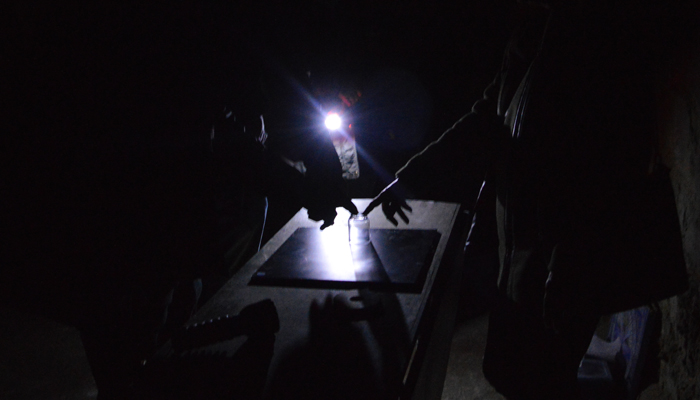 We were split into three groups as we headed out into different areas of the house to carryout vigils. Our group went to the coachhouse first. We'd decided to hold our first vigil in the stables as on our initial walk around a few members of the group felt a little uneasy in this area. We'd also heard taps and knocking, and one of the EMF meters flashed as it detected an unexplained spike in electromagnetic energy, something which paranormal investigators often attribute to hauntings.
Terry started us off with some table tipping. We gathered around two rickety tables and each places a finger lightly on the table top. The idea of table tipping is similar to that of a ouija board, it's supposedly a way to communicate with spirits, but rather the sliding a glass around a board the aim is to encourage the spirits to rock or move the table.
We all gave it our best shot and "called out" to the spirits but unfortunately we didn't have much success with this, although other groups that night did manage to get a table in another part of the house moving quite violently. As this was my second time on one of these events, I actually felt a lot more confident calling out this time. At the end of the day, we're paying to be at the event as is every one else. You may as well make the most of it and immerse yourself in the event.
We left the stables and moved on to the basement of the chapel, the former servants' quarters, where Caroline had set up a ouija board on a table for us to use. I was really eager to see a ouija board work. As a skeptic I don't believe in the spiritual connotation of a ouija board but I am well read in the psychological principles behind it and I believe the planchette can move across the board.
I've used ouija boards before and never had any success, I put this down to me not being suggestible. So, initially I decided to stand back and observe but a few members of our group weren't keen on getting involved with the board so after a while I put my finger on the planchette, along with two other members of the group.
I got quite into calling out and it didn't take long for the planchette to start sliding across the board albeit quite slowly. After slowly moving to "yes" to confirm there was a spirit present, we asked the spirit to spell out its name. We eventually got the letters F... I... N, Fin.
I was quite pleased to have experienced this, the motion of the planchette and later a glass across the board felt effortless and I'm sure all three of us using the board would swear we weren't moving it intentionally. I know I wasn't so I have no reason to doubt the other two.
Our third vigil was with Natalie in the Masonic temple, the former chapel which has a large statue Guy of Warwick adorning one of the walls. I think I enjoyed this vigil the most, we sat quietly around the room in complete darkness. With a few ghost hunting devices scattered around the floor as well as some cat toys.
Cat toys may seem out of place at a ghost hunt, but they're actually really effective. The toys being used were little balls which lit up and flashed when they were moved. Almost immediately two of the balls began to flash of their own accord and several knocking sounds were heard from around the room, specifically in one corner where a shadowy figure is said to have been spotted during previous events.
The creepy corner became the centre of attention as the vigil went on. Towards the end of the session a large bang followed by several knocks was heard from the corner. At exactly the same time one of the pieces of ghost hunting equipment beeped and flashed. This was the strangest part of the evening for me and the hardest to explain.
During the evening, we were also given the opportunity to explore the house on our own. Me and the friend I attended the event with firstly went to explore the caves under the house but later ended up in a room called "the boardroom". A room which many, including Natalie one of the event organisers, find very uneasy. As we were heading up to the room two others in our group said "good luck up in the boardroom, we heard scratching in the loft and then the whole loft hatch went 'boom' and moved down." So, we headed up to the boardroom where we heard the scratching for ourselves.
This was the most uncomfortable I'd felt all night, I don't know if it was the scratching sounds or the creepy vibe of the room itself. The old 15th century room has been clad in 1970s style wood paneling. It's almost as if the wood hides the room's true identity and its secrets. I was quite pleased to get out of there and rejoin the rest of the group.

Audio Evidence From The Evening

The audio highlight from the night and the only evidence I captured was the bang we heard in the Masonic temple. In the clip the sound plays twice, recorded from two different devices. One microphone was right next to the sound and one at the other side of the room.

Book Your Own Ghost Hunt At Guy's Cliffe House

The ghost hunting event at Guy's Cliffe was another great night, the group leaders were friendly, welcoming, and brought along a selection of ghost hunting gadgets and a batch of tasty homemade brownies. What more could you want?
I love experiencing the world of the paranormal as a skeptic and this event was just as good as the previous one I attended at Drakelow Tunnels. The next ghost hunt on my list with is in January at the UK's most formidable haunted house, 30 East Drive in Pontefract.
My thanks go out to Natalie, Caroline, and Terry from Haunted Happenings for running the event, Adrian for showing us around the house, and all the participants for being good sports.
You can book your own ghost hunt at the Guy's Cliffe House with Haunted Happenings, find out more here.
Tags:
paranormalghostswarwickshireghost huntsguys cliffe househaunted happenings