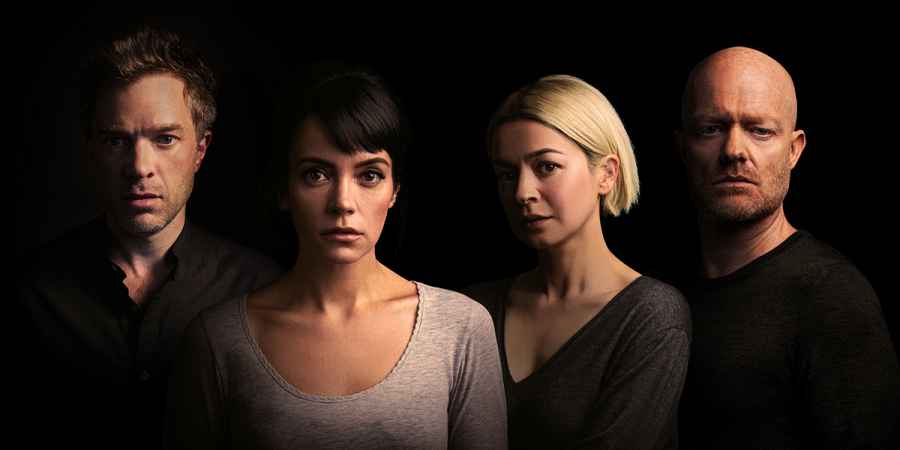 Not content with taking the paranormal world by storm with his hugely successful podcast, 'The Battersea Poltergeist', Danny Robins is now taking an all-new ghost story to the West End with the help of singer, Lily Allen.
Danny, along with Runaway Entertainment, announced that the world premiere of his new play '2:22 - A Ghost Story' will take place at London's Noël Coward Theatre on August 3. As well as Lily, the production will feature Julia Chan, Hadley Fraser, and Jake Wood.
Tickets for Danny's debut play in the West End, '2:22 - A Ghost Story', are on sale now at 222aghoststory.com for dates from August through until mid-October.
The play will be directed by Olivier Award-nominated director, Matthew Dunster, who received universal acclaim for his productions of Martin McDonagh's 'A Very Very Very Dark Matter', 'Hangmen' and Sam Shepard's 'True West'.
Lily takes on the role of Jenny, who believes her new home is haunted, but her husband Sam (Hadley Fraser) isn't having any of it. They argue with their first dinner guests, old friend Lauren (Julia Chan) and new partner Ben (Jake Wood). Can the dead really walk again? Belief and scepticism clash, but something feels strange and frightening, and that something is getting closer, so they're going to stay up... until 2:22... and then they'll know.
This edge-of-your-seat, supernatural thriller takes you into one adrenaline-filled night where secrets will emerge and ghosts may appear... What do you believe? And do you dare discover the truth?
Lily Allen said, "I am so excited about getting to work on this play! The live performance aspect of my career has always been the most thrilling part for me, connecting with a group of individuals and the spontaneity of whatever happens on the night. I feel that stepping into this play is an exciting natural extension of that and affords me the best of all worlds. I get to explore mature subject matter, be a woman with a real point of view and show the West End audiences how much I love live performance and being in front of an audience. I can't wait!"
She added, "Danny's play is a brilliant investigation into the ghosts that haunt us and the hows and whys they come to be. It's everything I love; wit, a meditation on marriage and relationships and family all hinging on a frightening plot. Matthew is an amazing director who has worked with some of the coolest material theatre has to offer. I'm a fan of what he does, and so honoured that he asked me to come on board."
The play's director describes the production as "a unique combination of horror and social commentary", a winning combination not too dissimilar from Danny's 'The Battersea Poltergeist', which fused together elements of horror an investigative research so well that it's now being made into a television series.
Director, Matthew Dunster said, "Danny has really come up with something special and scary for audiences to experience together as they return to the theatre. Myself and designer Anna Fleischle like creating an atmosphere of suspense, just as we did together on 'Hangmen and A Very Very Very Dark Matter'. And this is Lily's stage debut, and I feel really privileged and excited to be guiding that. Lastly, I've always wanted to direct something that means at the end you ask punters and press not to spoil it for those who'll come later. There’s a real surprise waiting for audiences."
Danny Robins said, "I'm thrilled to be making my West End debut with this jaw-dropping cast and Matthew, one of the most exciting directors in British theatre. Anyone who's heard 'The Battersea Poltergeist' will know my fascination with the question 'do ghosts exist?', so '2:22' has been a labour of love, exploring the clash between belief and scepticism through a couple's relationship. And of course it's bloody scary! I wanted to create a night out in the theatre that gives you that delicious tingly feeling in your spine and keeps you on the edge of your seat right up until the end. There's something deeply cathartic about ghost stories - what better way to celebrate the end of social distancing than to grab your mate's arm in terror?"
Danny continued, "I'm excited to partner with Runaway who have a great track record of delivering really distinctive 'event' theatre. I'm hoping this will be a show you'll enjoy and then argue with your friends about. And I'll be wanting to know on Twitter afterwards - what do YOU believe???"
'2:22 - A Ghost Story' features set design by Anna Fleischle, costume design by Cindy Lin, lighting design by Lucy Carter, sound by Ian Dickinson for Autograph Sound, casting by Jessica Ronane CDG and illusions by Chris Fisher, and is produced by Tristan Baker and Charlie Parsons for Runaway Entertainment, Isobel David and Kater Gordon.
Get your tickets now at 222aghoststory.com.
Tags:
battersea poltergeistparanormaltopicaldanny robins