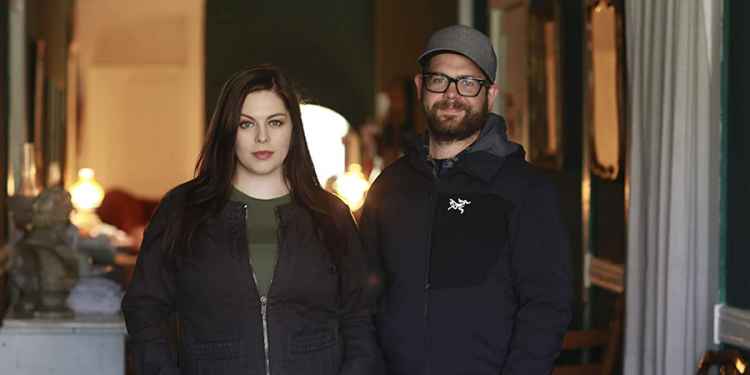 Jack Osbourne and Katrina Weidman return in nine new episodes of their US ghost hunting series, 'Portals To Hell'. The show premiered in the US last month with a two hour special, but inexplicably here in the UK the Really channel are jumping straight in with episode five, which follows the paranormal investigators as they travel to Tennessee to investigate a once-thriving natural springs resort.
The Thomas House Hotel was built in 1927, and stands on the site of an older building constructed by the Cloyd family 1894. The original Cloyd Hotel was destroyed by a fire, but both the original and the new hotel served the same purpose, they were both resorts giving access to the local hot springs. It turns out that the naturally hot water contained high levels of toxic substances that ultimately resulted in the deaths of many locals. Jack tells us "the town went from 14,000 to 800."
With the hotel shutdown and cleared of guests for the investigation, Jack and Katrina have the whole building to themselves. An opportunity Katrina describes as being like something from 'The Shining'. The investigation marks Katrina's third time at the hotel, but is a first for Jack.
The hotel's owners, Darrell and Cherry Cole, think the increase in paranormal activity, including a rise in what they think is malevolent activity, could be down to various paranormal research teams who have visited the building. Darrell said, "some people were here one night and they were trying to conjure something upstairs."
Before the investigation even got underway Jack experienced his first scare when a bird flew into the window behind him while he was talking to camera. They then head over to the old family church in the grounds with psychic, Michelle Belanger. Katrina tells us the the psychic is very familiar with the house, so it wasn't too shocking when she reeled off facts about the church.
The psychic mentioned that the house is likely to be haunted by elemental, these are non-human spirits that are associated with land rather than buildings or people. Based on this, Katrina said, "I feel that is where our investigation needs to focus at this point." This seems a little foolish. Psychics are unproven at best, they've been debunked many times. Sure, testing their abilities and using them as a tool on an investigation might be interesting, but basing your whole investigation around the claims of a psychic seems very limiting.
This problem is highlighted further when the duo start their investigation with a séance in the dining hall. Jack tells us "it doesn't communicate the way a human spirit communicates, it's a completely different entity." This instantly means Jack and Katrina are limiting the ability of a human spirit to come through, despite the fact that the owners have said they've experienced disembodied voices, laughing, and the piano playing itself in the room - all of which sound pretty human-like in nature. 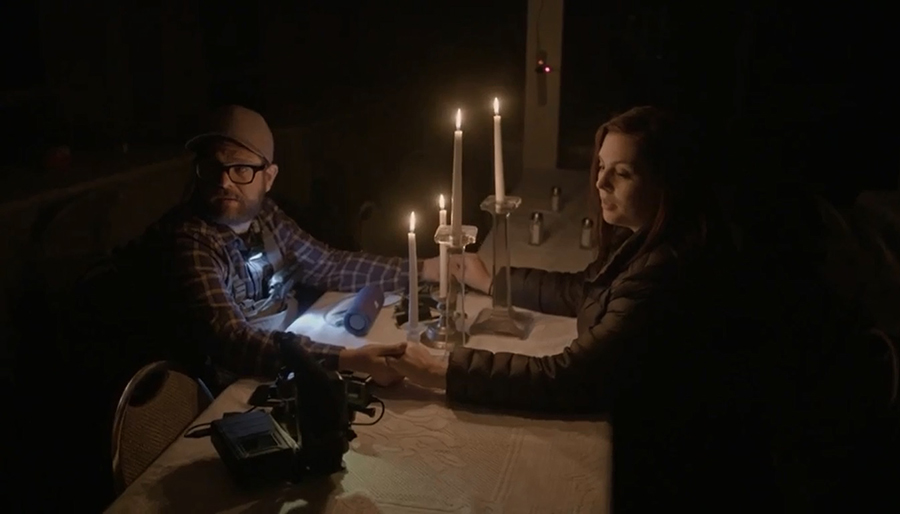 Early in the séance they hear a knocking sound and go to investigate, they're unable to find the source of the sound so return to the séance. Katrina calls out "if that was you, can you make that sound again?" It now sounds like Katrina has wisely abandoned the idea of elementals and is now just talking to human spirits as normal, since she isn't using the different method of communication Jack said they'd need to.
Moments later Katrina saw a tiny unexplained blue light, and seconds later Jack saw a shadow sweep across the end of the room.
Despite the promising start in this area, the pair made the mistake of moving upstairs to another part of the building, a corridor known as the "dark hallway." Apparently it is always dark and unsettling there, even in the daytime. Dark shadowy figures have been witnessed here, as well as disembodied voices and light anomalies. Sadly, on this occasion the hallway was void of any activity and the investigators moved on.
Their next stop was the church, where according to local legend a priest was said to have hanged himself.
In the dark church they use a Geoport, which randomly scans through a bank of phonetic sounds allowing entities to produce intelligent responses to their questions. They heard the same word come through several times, but the significance of the word wasn't clear and the investigators soon abandoned this experiment as the investigation came to an end.
It was nice to have 'Portals To Hell' back, it's refreshing to see a paranormal show where the investigators don't take themselves or the investigation too seriously. Jack and Katrina have good personalities, work well together and aren't afraid to have a giggle when the investigation allows it. There's also an obvious lack of drama. Neither of the two ever scream, pass out, or run from a location in terror, it's just a level-headed investigation.
There was also a nice moment near the start of the episode when Jack was using an EDI+ meter, which is a ghost hunting multi-tool with various gadgets built-in. It started to behave erratically, but Jack didn't jump and swear at the flashing lights like in other shows, Jack stopped and thought about it. After a quick test to try to recreate the activity he discovered the device was reacting to the air conditioning in the room switching on. Some other shows would have left viewers to believe this was 100% paranormal.
In fact, the whole show is very credible. Even the fact that in this week's episode not much happened backs up the fact that we're watching genuine investigations, because in real life, most of the time, not much happens.
Portals To Hell continues next week on Really as part of the channel's #Freakend event, bringing viewers two nights of paranormal entertainment every Thursday and Friday.
You can watch in the United Kingdom and Ireland as part of the Discovery family of channels. You can watch Really on Freeview (17), Sky (142), Virgin Media (129) and Freesat (160), plus YouView, BT TV and TalkTalk TV. Or watch previous episodes on demand on dplay.