Jack Osbourne and Katrina Weidman team up again for an all-new season of 'Portals To Hell', premiering Saturday, April 9 on the Travel Channel in the USA and streaming the same day on Discovery+. 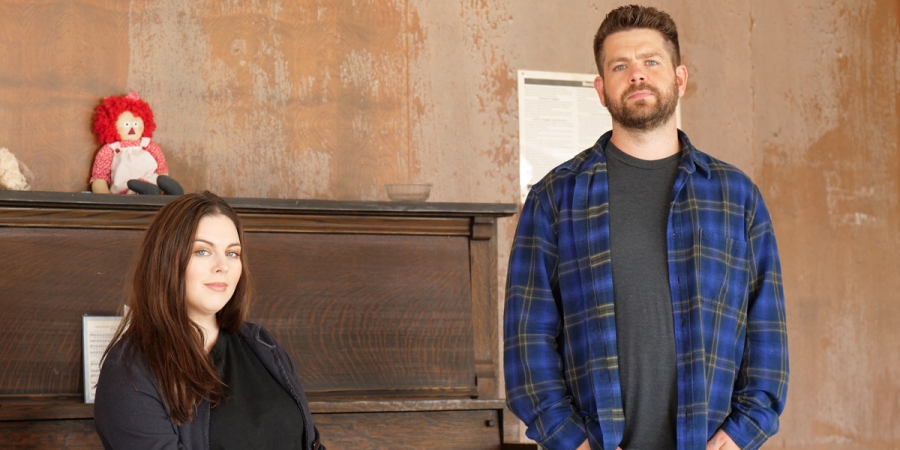 Photo: © Discovery+
There's hell to pay, and Jack and Katrina Weidman are on a mission to find out why. The intrepid paranormal investigators are led to haunted locales where sinister spirits display a vendetta against anyone in their presence.
There is no Casper or friendly ghosts in these 13 new hour-long episodes. The deeper the history the deeper the haunting. Exploring the shadowy corners of Detroit's Eloise Psychiatric Hospital, the historic Savannah Theatre, Staten Island, New York's Kreischer Mansion, Philadelphia's Fort Mifflin and the infamous Missouri State Penitentiary, among others, Jack and Katrina confront disturbing activity and malevolent entities that have left those that crossed their path shaking in fear.
Using their paranormal expertise, advanced scientific equipment and a network of specialists, including a team of psychic mediums, the duo search for evidence and answers as to who, or what, is wreaking such havoc on the living.
"This is a creepy AF new season, twisted and wildly unexpected," said Jack. "The locations were bottled up with activity that hit us almost immediately. The vibes were dark and tense, and there were many times when I was seriously scared of what we might encounter."
"These places had an intense energy you could feel the minute you walked in," added Katrina. "Just being inside some of these buildings elicited an unexplainable physical discomfort. So many of the locations this season are just eerie and unnerving."
In the season opener, the pair travel to New Castle, Pennsylvania, home to Hill View Manor – a shuttered nursing home where former patients are rumoured to live on after death. The sprawling complex has almost as many spirits as it does rooms. Constant reports of scratching, chronic dizziness and shadow apparitions have turned the building's new owner, Carrie, from a paranormal skeptic into a full-blown believer. With her original plans to turn the property into condos no longer viable, she is hoping Jack and Katrina can figure out what exactly is going on within Hill View's walls. But to get to the bottom of what's feeding the manor's dark forces, the duo will first have to face the Creeper – a malevolent shadow creature bent on scaring the living hell out of its victims.
The 13-part, third season of 'Portals To Hell' begins Saturday, April 9 on the Travel Channel in the USA and will stream on demand the same day on Discovery+.

Episode 1: Hill View Manor
Premieres April 9
Jack and Katrina travel to Hill View Manor in New Castle, Pennsylvania, a shuttered nursing home where former patients are rumoured to live on in death. There, they’ll cross paths with the Creeper, a malevolent shadow creature bent on scaring the living hell out of its victims.
Episode 2: Eloise Psychiatric Hospital
Premieres April 16
Jack and Katrina investigate Eloise Psychiatric Hospital in Detroit, Michigan. Once known for its cutting-edge facilities, Eloise is now notorious for its aggressive spirits and is host to a dark entity that delights in choking its victims.
Episode 3: Taylor Trask Museum
Premieres April 23
Jack and Katrina head to Plymouth, Massachusetts, to investigate the historic Taylor Trask Museum, which has never been investigated on television. The caretaker, Jan, wants to calm the restless spirits, but with the recent uptick in paranormal activity, she fears for her safety.
Episode 4: Savannah Theatre
Premieres April 30
Jack and Katrina investigate the Savannah Theatre in Savannah, Georgia, a paranormal playhouse dating back almost 200 years. And in a television first, the duo takes the stage and discovers that this theater likes to put on a horror show.
Episode 5: Fort Mifflin
Premieres May 7
Katrina takes Jack to one of her favorite hotspots – Philadelphia’s Fort Mifflin, a location rife with the ghosts of wars long past. The pair peel back the layers of haunted history and discover something unexpected is stationed at the fort.
Episode 6: Missouri State Penitentiary
Premieres May 14
The team heads to the infamous Missouri State Penitentiary in Jefferson City, Missouri. With a history of suffering and violence that goes back over a century, Jack and Katrina look to finally unlock what may be haunting this legendary location.
Episode 7: Malco Theatre
Premieres May 21
In Hot Springs, Arkansas, Jack and Katrina explore the historic Malco Theatre, a live magic venue never before investigated for television. But in a town charged by strange geothermal forces, not all phenomena at this theater appear to be the trick of a magician.
Episode 8: Kreischer Mansion
Premieres May 28
Katrina takes Jack to Kreischer Mansion in Staten Island, New York, where a past paranormal experience has left her searching for answers. A new spirit has taken up residence since Weidman’s last visit, but it may not be what the new owners think it is.
Five more episodes to be announced.

More From Jack & Katrina View All