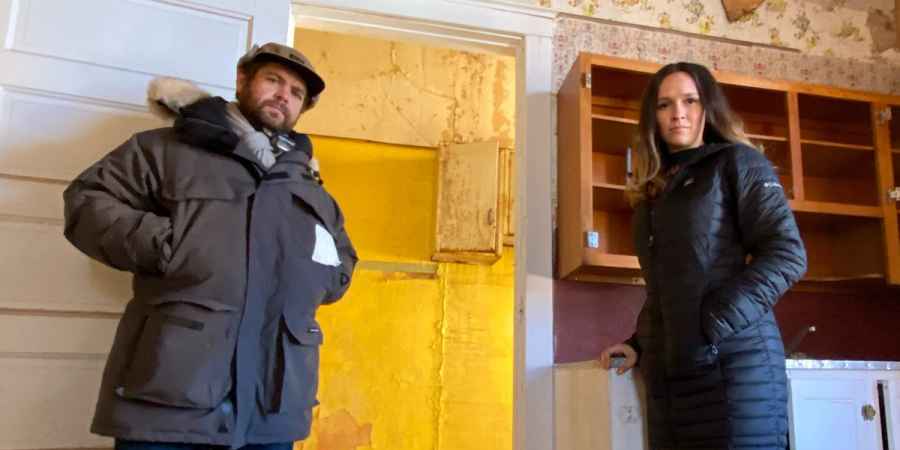 In this week's 'Portals To Hell' Jack Osbourne is on the hunt for proof of paranormal activity at the Stephenson Building in Wymore, Nebraska, but he's not joined by his usual co-investigator Katrina Weidman. For this vigil Jack has teamed up with guest investigator Heather Taddy.
Heather featured in the 2019 documentary series 'Alien Highway', but is perhaps best known as a member of the 'Paranormal State' team, which she featured in alongside Katrina from 2007 until 2011. Although Katrina will be missed, it's always refreshing to see a lesser known investigator on a television show. Hopefully Heather will being her own unique methods to the investigation.
The Stephenson Building has never been investigated on television before. It was built at the end of 17th century and has a sinister past with links to the Mafia. Now it's current owner, Brian Polson, is planning to open it as an oddities museum, but while working at the building there have been reports of people being pushed and scratched.
Katrina chatted to Jack and Heather in a video call with a few questions of her own about the property. She wondered, "the owners have been claiming that things have turned aggressive, so then the question is was it always there? Or if it wasn't always there, who invited it?"
Heather said, "it is fun to collect haunted objects, I personally don't do it and I wouldn't recommend it, because you don't know what the object has been through, you don't know what's attached to it." Jack added, "I don't really feel like I want to be handling the objects in there, because I don't really know the backstory."
After their initial tour of the property, Jack and Heather concluded that the objects the owners have brought in have intensified the haunting. Heather said "it doesn't seem like they want it to stop."
After sharing this information with Katrina via a video call, Katrina told them "this is something negative and next-level," she added, "in demonology this is like classic first steps of an infestation."
Before their first full night of investigation they left an audio recorder locked in the property over night to record any odd occurrences. When they reviewed the audio the next day they heard various strange sounds, including what sounded like footsteps, bangs and dragging noises. 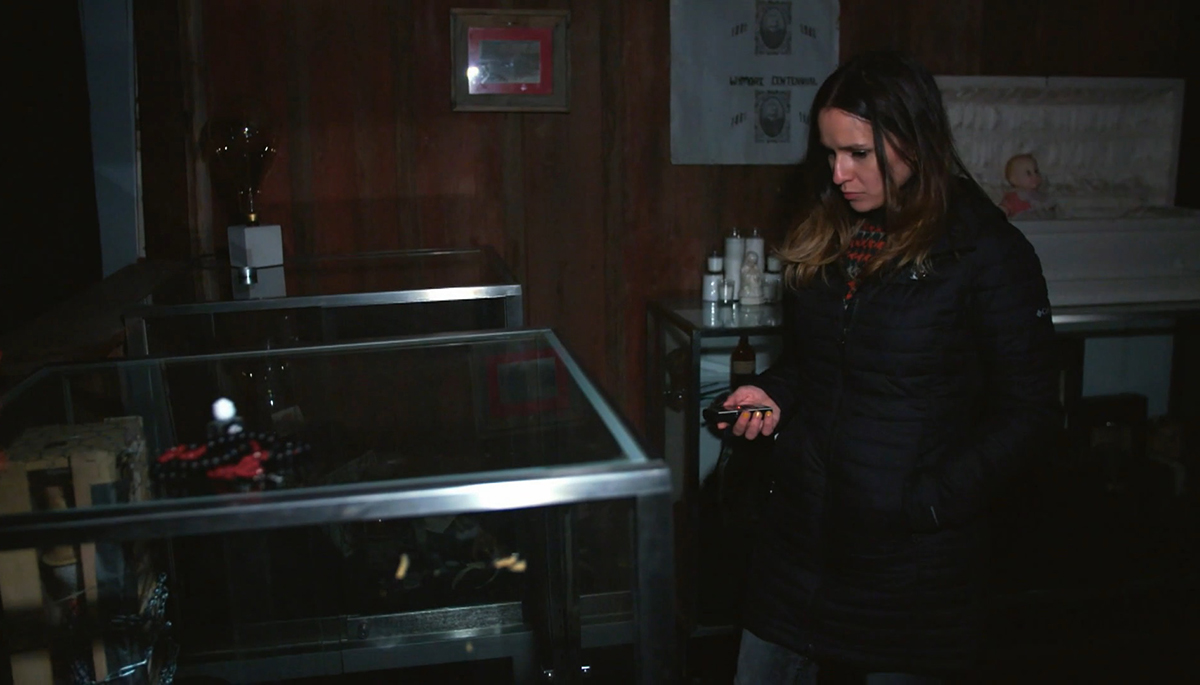 While they were setting up and getting ready for their investigation, Jack and one of the producers heard a voice coming from the top of the crooked stairs leading to the upper floor. So, this is where Jack and Heather chose to start their investigation.
The upstairs of the building was once used as a dance hall and hid a brothel at the back in the 1920s and 30s. After a quick wander through the area, it seemed quiet, so the duo headed downstairs.
The lower floor was once a saloon, now it is a museum of oddities housing various curiosities including ouija boards and an exorcism kit, which were together in a display cabinet. On their tour of the building, the owner Brian told them that this cabinet is particularly sinister, but the only evidence he gives of this is "spikes" on ghost hunting gadgets, flashing lights are far from menacing.
The museum also houses a creepy clown belonging to Brian's business partner, Jeremy Kurland. The doll, called Mr Peasebottom was made in a German prisoner of war camp in 1942 and due to its alleged paranormal power, has chains wrapped around it to contain it. Since moving the doll into the building there have been reports of guests being scratched.
Once local investigators caught a voice in the form of an EVP saying "I'm stuck in this box". An EVP, or Electronic Voice Phenomenon, is a method of spirit communication that involves capturing the sound of spirit voices in audio recordings, usually using a digital audio recorder.
After hearing the eerie clip that sounded like a child's voice, Jack said, "I'm surprised that you were getting English language come through if it was made in Germany." This is the most rational thing Jack has ever said on this show, but despite calling the audio "too good to be true," Jack is still convinced the stories and the recording are 100% true.
Starting their investigation of the museum area, Jack tried to capture similar EVPs, but failed. He also try to encourage Mr Peasebottom to demonstrate his "powerful dark energy" by flashing a light on a REM-Pod. A REM-Pod is a device that senses changes in electrostatic and beeps if anything gets close to it. The light did flash red indicating that something was effecting the device. 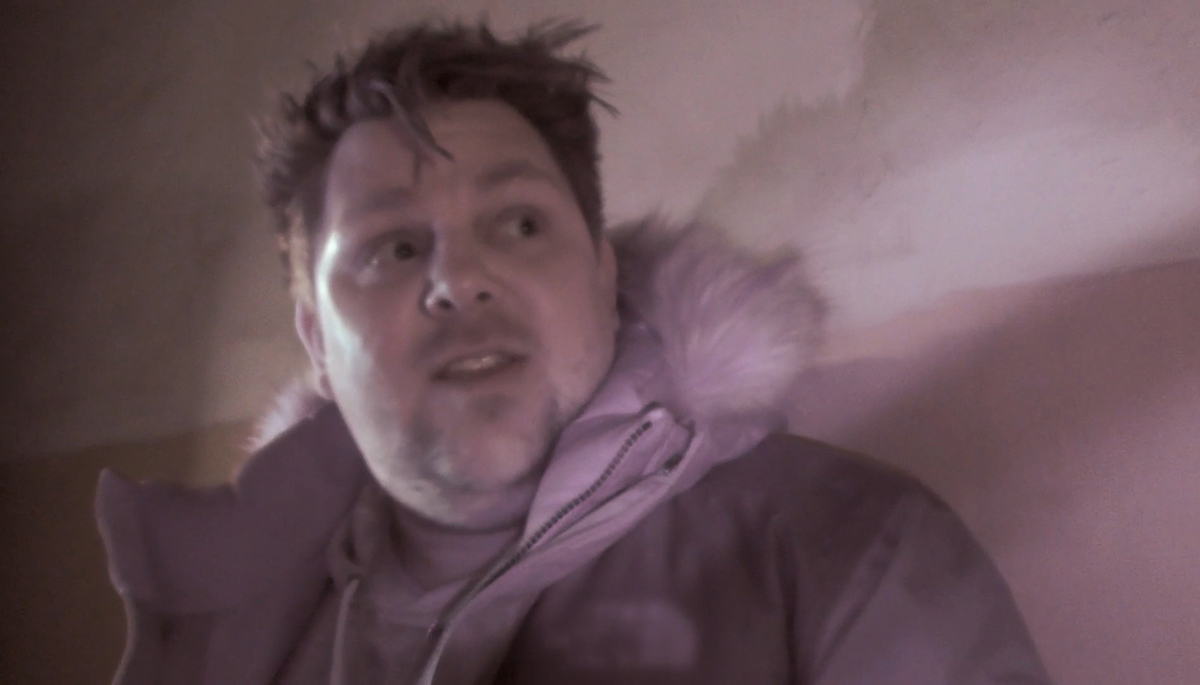 Jack and Heather then took a break from their investigation to meet psychic medium, Tyler Evans, who specialises in psychometry. This ability means that he should be able to uncover facts about the spirits or entities attached to the items in the museum when he comes into close contact with them.
This is a little different to the normal "psychic sweeps" they have in the show as it has a little more purpose since they're dealing with haunted artefacts that they don't know the history of.
They started out upstairs in the hallway at the back of the building, which is said to be one of the property's most active spots. Here, Tyler picked up on scratching incidents.
They then moved into the mirror room upstairs. This room has clearly been set up for ghost hunts. The walls are painted black and there is a mirror against each of the four walls. One of the mirrors is said to "suck people in" and it was this mirror that Tyler was drawn to.
The medium tells Jack and Heather that a man lost his life in front of the mirror and gives the date 1963. Tyler is compelled to turn the mirror around as he felt something was on the back. Etched on the back of the mirror was a manufacturer's date of 1963.
Later in the museum, Tyler became overwhelmed. He said it felt like he was being suffocated. He felt that this sensation was being caused by the exorcism kit. Tyler then found the Mr Peasebottom doll, which he called "a little bastard," he said "please don't tell me this is from Germany." Sadly, Tyler wasn't able to give us any new information about the doll, but said he thought it had a demonic attachment.

Sadly, this marked the end of the investigation. It felt like Jack and Heather were on to something very interesting, but failed to get their teeth stuck into it in order to uncover any real answers. It would have been nice to have seen Heather embark on a little bit more investigating to get a feel for her style and methods.
Their period of investigation was pretty quiet and uneventful. However, Tyler did produce a little more insight into the story of the mirror room during his psychic sweep.
Most of the evidence obtained in the episode was through the recording device that Jack and Heather left in the property the night before their actual investigation, however the type of knocks, bangs and footsteps captured are pretty common in all haunting cases. There was nothing particularly dark or sinister about the haunting that would suggest any kind of demonic infestation as the ghost hunters initially suspected.
The Stephenson Building seems like an interesting and currently untapped location with plenty more secrets to be uncovered.
Portals To Hell continues next week on Really as part of the channel's #Freakend event, bringing viewers three nights of paranormal entertainment every Thursday, Friday and Saturday.
You can watch in the United Kingdom and Ireland as part of the Discovery family of channels. You can watch Really on Freeview (17), Sky (142), Virgin Media (129) and Freesat (160), plus YouView, BT TV and TalkTalk TV. Or watch previous episodes on demand on Discovery+.