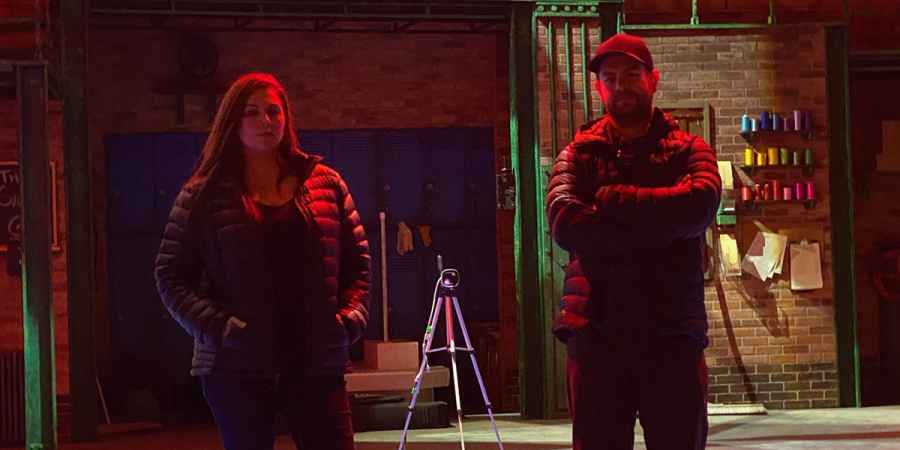 Photo: © Discovery+
Jack Osbourne and Katrina Weidman investigate reports of a 'Portal To Hell' at the Fulton Theatre in Lancaster, Pennsylvania. Joined by guest psychic, Chris Fleming, the duo are the first to investigate the location on television.
The property has had a varied and interesting past having been used as a hospital during the Civil Wars, a pre-revolutionary jail, and it has access to a network of underground tunnels. If that weren't enough, the theatre was built on the site of a horrific Indian massacre.
The paranormal activity is said to include full apparitions, disembodied voices, dark shadows and a general sense of unease. The activity seems to have been stirred up by recent renovations and the coronavirus shutdown, which has halted the theatre's busy schedule allowing time for Jack and Katrina to investigate.
Despite its dark reputation, upon arrival Katrina said, "it's beautiful. It's amazing." She added, "this is all very exciting for me personally because it's a theatre, and that was my major in college, so it's always fun to visit one." 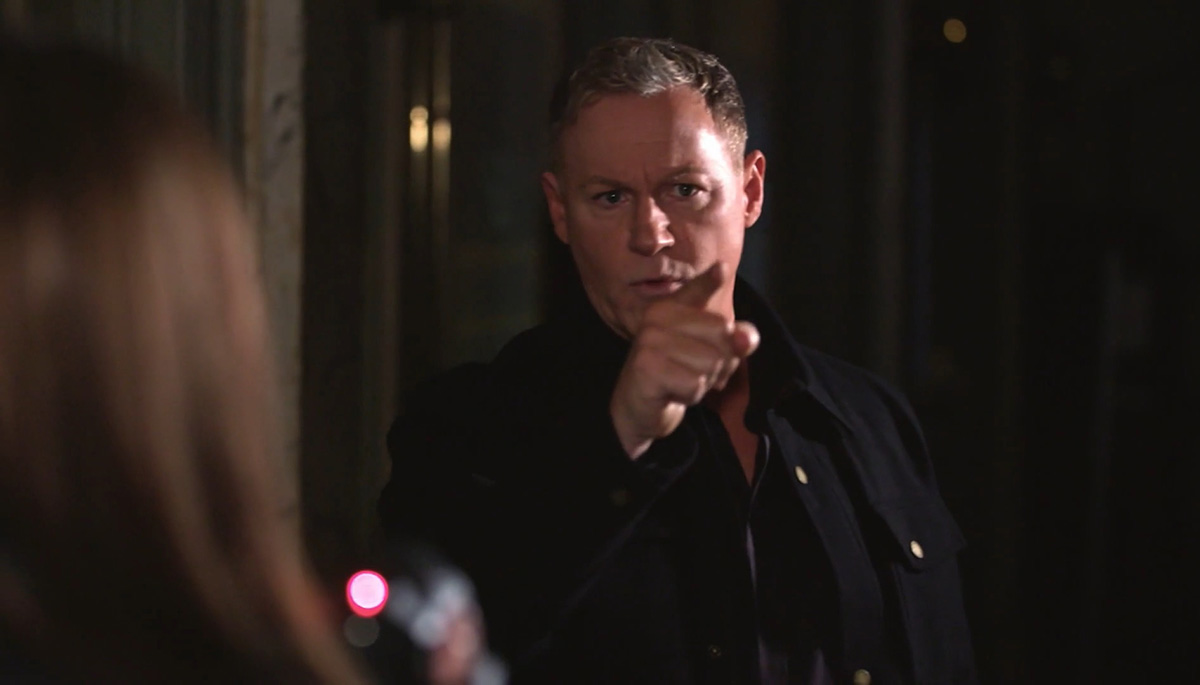 In this week's episode, the psychic sweep was conducted by Chris Fleming, who may be familiar to viewers as one of the lead investigators on 'Help! My House Is Haunted'.
Chris lead the investigators to the tunnels under the building. This area opens up into the original foundations of the old jail. Staff and actors refuse to come down here alone and musicians who walk through the area to access the pit have for decades left offerings and trinkets to appease the spirits so that they don't mess with their instruments during their performances.
Chris was able to add a little more about the paranormal goings on in this area. He said he was aware of a female energy who was with a child, as well as torture in the former prison. In another part of the tunnels he picked up on the lingering energy of a traumatic event. He said, "I'm seeing children, women, men, and it's almost like they're being rounded up and something done to them."
He continued, "now I can see them hiding, and they're there, they're just crying and they're worried. They're like afraid it's like someone's going to come through and get them. And then they died."
This ties in with the story of a Native American massacre which took place in the old jail. In 1763 the Paxton Boys murdered six members of the Cannestogoe tribe. To keep the remaining members of the tribe safe they were moved into the prison's courtyard, but the Paxton Boys broke in and brutally massacred the 14 remaining Cannestogoe, wiping out the entire line of the peaceful tribe.
Chris said that the spirits of those murdered are being held at the location by dark entities. He said, "the negative things came here because there was some sort of event that caused pain and then they fed off of that, that death."
On the second floor, Chris picked up on the energy of a female spirit that he describes as a "kind soul". He linked the energy to the Civil War. The building does have a connection to the Civil War, but the hospital was actually two floors up - perhaps sprits from that era roam the whole building.
Chris also picked up on the spirit of a female actress in the main stage area, this could be the ghost of a famous actress name Marie Cahill, who is said to haunt the building. 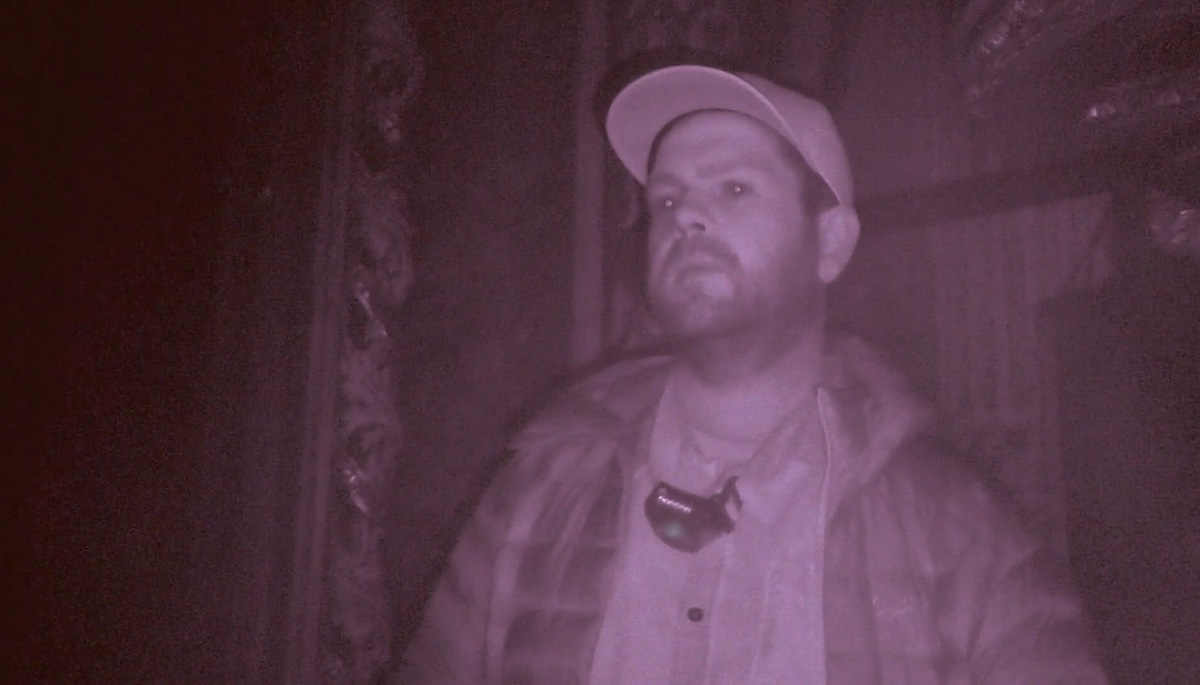 With the psychic sweep completed, witnesses interviewed and the building rigged with night vision cameras, Jack and Katrina started their investigation.
They began on the stage in the stunning theatre where a ghost known as "the whistler" is said to haunt, it was also here that Chris picked up on Marie Cahill's energy, who is said to mess with performers on the stage. Jack also thought that he saw something odd in the rigging above the stage during his tour of the building with staff members Stephjo Wide and Eric Pugh.
They started off by using the theatre's smoke machine to fill the stage with fog. Katrina explained, "the thought is, if you fog or haze a space, it might be easier to see if somethings moving around," the challenge of course is to pick out any anomalous movement from the haze itself which will naturally swirl, spread and move - this point is illustrated by some very cool shots of the smoke swirling around the camera. Katrina added, "we'll also have the laser going so if there's any shadow movement, that should block out those points of light."
Before long Jack heard some rattling sounds coming from backstage so they went to the green room to investigate. This room stands directly on the site of the old prison's courtyard, the exact spot where the Indian massacre took place. They spent a little while in the room, but it seemed quiet.
The duo moved on to the tunnels where they left an offering to the Native Americans who lost their lives there. After a little while they heard an unexplained rumbling sound.
Katrina then tries a Geoport session. This device monitors vibrations, radio waves and electromagnetic frequencies. It's thought that spirits can manipulate or use the device's sensors to relay intelligent responses in the form of words or phrases, but before they even got started they abandoned it when Jack saw something move further down a tunnel. Sadly, Katrina didn't see anything and nothing was caught on camera.
The pair end their investigation on the fourth floor, the area that was once used as a Civil War hospital. In this area, Jack once again thought he saw something out of the corner of his eye, he said the adult figure he saw walking out of a doorway had long blond hair.
It was an interesting and beautiful location, but probably one of the most uneventful investigations on 'Portals To Hell'. Other than Jack seeing movement out of the corner of his eye and a couple of unexplained sounds - a rattle and a rumble, which could have been external sounds, nothing else happened at all. Not even a whisper through the Geoport.
Portals To Hell continues next week on Really as part of the channel's #Freakend event, bringing viewers three nights of paranormal entertainment every Thursday, Friday and Saturday.
You can watch in the United Kingdom and Ireland as part of the Discovery family of channels. You can watch Really on Freeview (17), Sky (142), Virgin Media (129) and Freesat (160), plus YouView, BT TV and TalkTalk TV. Or watch previous episodes on demand on Discovery+.