The First Stranger Things Season 3 Reviews Are In – The Verdict? 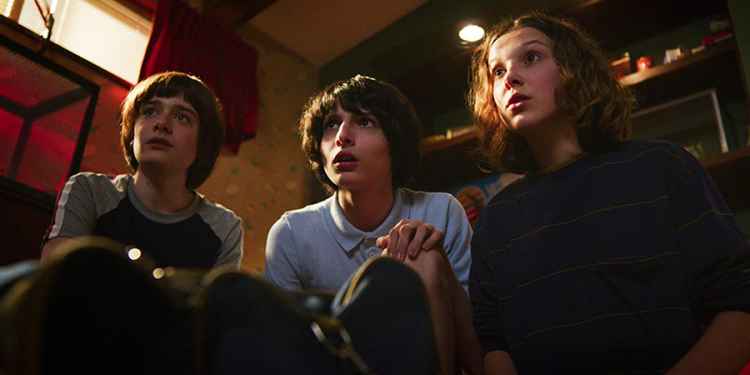 If you're anything like us, you've been waiting for the start of Stranger Things 3 since about four seconds after season 2 disappeared into the underworld of Netflix, and that was nearly two years ago!
Season 2 dropped on October 27, 2017. An apt date as the Halloween vibe was very strong in that season. Season 3 we've known for some time would appear on July 4th, American Independence Day. The trailers have only reinforced the importance of that date in the American calendar, a summer day of celebration, swimming in pools and lakes in the sunshine, barbecues, parties and perhaps a bit of midsummer romance?
But, with expectation mounting, we want to know if Season 3 will be any good! Well, in an unusual move for Netflix, they've allowed certain reviewers to watch the new season on the understanding they don't reveal any spoilers. (We asked, apparently Netflix don't like us enough to let us watch a preview – sort it out Netflix dudes!)
SPOILER ALERT: There's nothing we've written here that you wouldn't have worked out from the trailers and speculation about the season. That being said, if you want into head into season 3 with a clear head, then STOP READING NOW!!!
We were assuming season 3 had to move things on a whole lot, especially as many people felt season 2 had been a bit of a letdown. The gang of kids are getting older and heading towards adulthood. We couldn't just have another season of kids on bikes running round Hawkins, so we're pleased to get a sneak peek...
"Nostalgic Hit is Better Than Ever With an Exciting, Emotional Third Season."
Slashfilm

Over on Slashfilm,  Chris Evangelista is full of praise for season 3.
Setting the scene, Hopper has assumed the position of Eleven's dad, and is getting frustrated by the blossoming romance between Mike and Eleven. Hop is pretty keen on Joyce, who remains upset about the somewhat nasty destruction of her previous love interest gentle Bob in season 2.
But the affairs of the heart pale into insignificance besides affairs of the dark, as the mind flayer from season 2 is still in their 'hood and apparently is after revenge.
Season 3 also sees the issue of the burgeoning number of regular characters that ballooned in season 2 handled by grouping them up. So Dustin, who became best buds with Steve in season 2, hangs out with him in the mall with his new colleague Robin. Lucas's sister Erica makes more of an impact this season, and joins this mall group.
Mike, Lucas and Will stay solid in their own group, whilst Eleven spends a lot of time with her new best friend forever Max.
Meanwhile Nancy and Jonathan are working at the local newspaper.
So, despite all these different groups doing their own things, the Slashfilm review says that all the different plot threads are united in a satisfying way:
"Nothing here seems crammed together, or extraneous. Instead, Stranger Things 3 carefully builds its way towards big Spielbergian moments loaded with pulse-pounding action beats against memorable set pieces. And everyone is bringing their A-game."
"...what might very well be the best season of this series yet.  I leave season 3 excited to see what comes next. To hell with the dead summer movie season – stay home and get your blockbuster kicks from Stranger Things 3."
Okay, we're sold. That would be enough, but there's more...

"Debuting almost two years after season 2, but taking place several months after, the scrappy kids we first met three years ago are now gangly teens struggling to reconcile their childhood passions with their flailing hormones."
Variety
Caroline Franke writing in Variety points out that she can't reveal many details:
"The list of 'do not reveal' spoilers Netflix sent alongside advance episodes is as long as it is strategic, prohibiting me from so much as hinting at who (or what) the determined citizens of Hawkins, Indiana are up against this time."
She goes on to point out this is no bad thing, the less Stranger Things fans know going into season 3, probably the better.
What she does reveal is that she feels season 3 does a much better job than season 2 does.
"The mall especially proves to be a rewarding new location that sets the stage for more inventive battles. Even displacing the action from the spooky greys of late fall to the saturated heat of midsummer shifts the tone and challenges the directors to convey creeping unease through Technicolor sweat."
Her review finishes on this promising note:
"If I went into season 3 wondering how long Stranger Things can possibly keep this up, I left it assured that as long as the series keeps pushing beyond what initially made it work, it will have more story left in the tank yet."
"Throughout the new episodes storylines take unexpected turns and difficult decisions are made, all building up to a heartbreaking conclusion that stands in stark contrast to the previous two finales."
Radio Times
Ben Allen from Radio Times is again very positive about season 3 and really ramps up our expectation:
"[Stranger Things season 3] is exhilarating; the equal of its predecessor in terms of pure enjoyment but still eventually devastating, with a shocking and emotionally-charged conclusion that will ring out on social media for weeks to come."
Ben's review reveals we'll be hearing hits from 80s stalwarts such as Madonna and Yacht Rock gurus Foreigner, and also things three of the 80s films the season pays tribute to are The Terminator, Red Dawn and Fast Times at Ridgemont High.
Ben's review acknowledges that season 3 does a good job of tapping into what their fans want, something that perhaps they were too obvious about in season 2, and improve it in the new season:
"They manage to strike a better balance here, leveraging fan service with riskier plot points (some pleasantly surprising, some devastating). Dustin and Steve, who formed an unlikely but fan-favourite fraternal bond last time around, share a story strand once again."
"...the new episodes are exuberant and excellent, nearly surpassing the creative heights of the first season and providing a path to keeping things strange for years to come."
USA Today
Writing in USA Today, Kelly Lawler mentions that the Duffer Brothers have worked out that doing the same thing for the third time wasn't going to cut it for Stranger Things fans, and gives us a hint of some of the terrors that await:
"The series builds upon its Steven Spielberg and Stephen King influences with an homage to alien invasion and zombie films, creating a genuinely terrifying (and really rather disgusting) new threat."
She continues her review talking about the way the new season picks up on "transitional moments in adolescence" with the relationship dramas of the teens, whilst Will tries to hang on to childhood, and Dustin feels adrift from his friends after spending time at summer camp.
Her review finishes on a positive note about how the writers have combined the key characters and the monsters of Hawkins in a developing way without straying too far from the key elements of the show. "Eventually, repeated infiltrations of the Upside Down into Hawkins may start to get old, but Season 3 proves monsters and telekinesis aren't the only reason 'Stranger' is worth watching."
"Scarier, Funnier, and Better Than Ever"
Decider.com
Meghan O'Keefe reviewed the season 3 at Decider.com and clearly loved it. In fact, she thinks it's the first season that actually lives up to the blockbuster hype of the show.
"It's always been a fun show; at worst, Stranger Things has been a merely fine show. Now it is a bananas summer delight, full of grisly scenes, hilariously absurd set pieces, and a sauntering confidence in its own storytelling."
It sounds like we're in for a bit of a darker ride than the previous two seasons: "There are scenes of pure gross out horror — gooey, bloody, and wrong — that made me gag out loud. The battles now are bloodier, the supernatural creatures more monstrous, and the jump scares are far scarier."
You'd hope with a darker tone we can expect a few lighter moments too to balance things out? Meghan certainly thought so: "Stranger Things Season 3 not only doubles down on this bromance (and ropes a few funny ladies in, too), but shows off a comedic ease we haven't seen before. This season has the sharpest jokes, the most laugh-out-loud moments, and one insane sequence that feels like nothing Stranger Things has dared do before."
Meghan is also a big fan of an improvement in the way the show handles females characters, saying it is "inspiring to see a vibrant cast of female characters brought to vivid three-dimensional life." Saying there are improvements here across the board, but it's Eleven who shows the biggest development, the girl who started life as a laboratory experiment showing real emotional development.
Still not sure you're going to watch? We'll leave you with Meghan's closing words...
"Stranger Things Season 3 was not only well worth the wait, but it's positioned to be the epic summer adventure we've been waiting for. It's a dazzling season that doubles down on what the show does best and fixes its past hiccups. Stranger Things 3 is simply thrilling."
See you on Netflix on the 4th July!