It was a new low for Barry Dodds in this week's episode of The Parapod when he tried to convince Ray Peacock that the fictional movie 'The Babadook' is cursed. 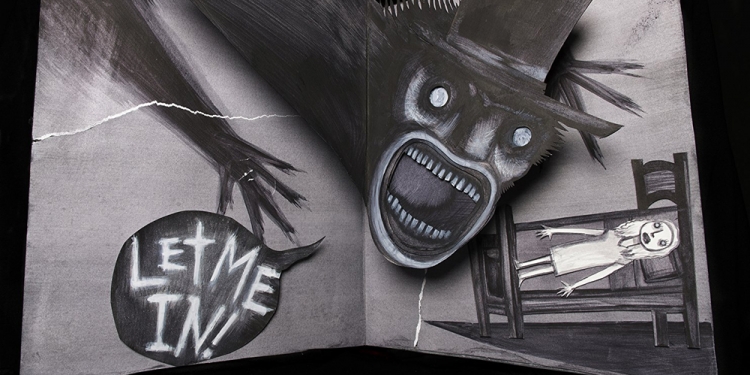 The episode starts with Barry analysing the mystery of the Mary Celeste, which he didn't really want to do and says is a "rubbish" mystery, but Ray forced him to research it and give his conclusion on it. It wasn't rubbish at all, it's quite an interesting and unsolved mystery, it was also a very funny listen.
But the mystery of the ghost ship wasn't the highlight of the episode, it was Barry's backup mystery. Barry proudly says "this is brilliant", before revealing that the movie 'The Babadook' is cursed. Ray straight away says "do you know it's a fictional film?" Barry says he does but Barry is adamant that the movie carries a curse.
Barry doesn't rate the movie itself very highly, "really average film, below average". He then runs through the plot, which focusses on a widowed mother, plagued by the violent death of her husband. After reading a book called 'The Babadook' to her son, he begins to think that the monster from the story is lurking in their house.

Barry then tells us about the curse, which apparently is based on the fact that there is a real children's book called 'The Babadook' which pre-dates the movie.
Ray let's on that he has heard about this curse from someone he knows who works in the industry, would know insider information about the movie, and wouldn't be lying, he added "the interesting thing they told me is that everything that's reported about this on the internet, is taken down."
Ray had previously told Barry about this conspiracy which is why he started trying to dig around for more information on the internet. He said, "it's really hard to find anything on the internet about it, because it always gets taken down. That's mental that someone's got that power."
Barry then made contact with a film reviewer, Chloe Catchpole for help on the topic. Chloe told Barry that whenever they used the prop of the book in the movie they started having bad luck, misfortune and things went wrong.
Barry then tells us about the origin of the story and the claim that the Babadook is a seven-foot tall, shadowy monster who kills anyone who reads the book. Barry says, "it was first sighted in 1813, some old bloke was reading it and his family were in the house, and they heard this huge scream and the man was found dead holding the book."
Luckily, Barry found some information on a website called Paranotions which according to Barry was hit by a cease and desist noice from the film makers, a few months later he had a second notice telling him to completely remove all the information. The website backed up the claim the the monster and the curse existed.
Sadly, he wasn't able to tell us much about what happened as a result of the curse as the information has been removed from the internet.

Towards the end of the debate, Ray put an end to the story by saying "I know for a fact that this is all bollocks. The reason I know his is all bollocks is because I started this". Barry went silent before shouting, "I've been sat for hours looking for something that doesn't exist." Ray snuggly says, "I know."
Ray then revealed to an angry Barry that he had started this conspiracy during a live video stream with fans of the podcast on Periscope. The movie reviewer, Chloe, was in on it. Barry then asks about the Paranotions website, Ray says "that was put up yesterday."
Ray then boasts about his "absolute fail safe safety net," Barry asks what he mean. Ray says, "we told you all the information on it gets taken off the internet. So, rather than just going 'well hang on, that's impossible', you've gone 'oh my goodness, that explains it'."
Barry still angry says that he spent hours searching Google for hundreds of phrases like "Babadook curse", "Babadook deleted from the internet", he says "I've even went on one Babadook thing that turned out to be someone's profile on Pornhub!"
Ray 5 - Barry 0.

More From The Parapod View All

Your First Look At The New Ghostbusters Movie

New Documentary Questions The Possibility Of Life After Death