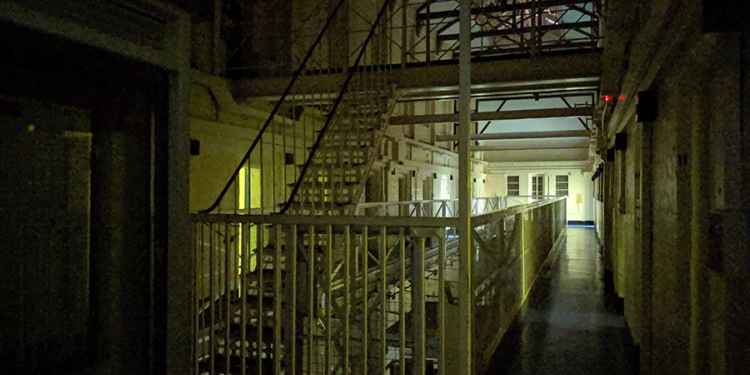 In this week's 'ParaPod Movie Podcast' we learn that Barry Dodds has recently spent sometime in prison and while there, collected a handful of ghost stories, but will they convince Ian Boldsworth?
HMP Shrewsbury, a prison was built in 1877 but stands on the site of a much older prison that dates back to 1793. The prison closed in 2013 and is now open to the public for tours and ghost hunts, so it's no surprise that Barry went to spend the night.
While at the prison, Barry met a former prison guard named Mick. Barry tells us that Mick worked there from 1992 until the prison's closure. Mick told Barry about a certain albino prisoner who he described as 'evil'. Barry asked if he could see this prisoner's cell. He told Ian, "honestly, as soon as you went in you could feel it."
Barry continued, "we were walking round and we were in the dark, and straight away I went 'cigarette smoke'." Barry said he could smell a scent of tobacco so strongly that he could follow it to one specific cell. One of the guides, Stacey, told Barry that the place where he's smelt the smoke was where a phantom known as "shadow man" had been sighted and his appearance has been linked with the sudden smell of cigarettes.
Ian was understandably unconvinced by this, so Barry tried to impress him with one of Mick's stories about the time he ordered a head count after seeing a figure walk across one of the landings in the wing. It turns out no inmate was missing from their cell, leaving Mick to conclude that the figure must have been a ghost.
Barry told Ian that at one point in the tour he entered a room, and with no knowledge of what it was used for, he said he felt a "weird feeling". It turns out that this was the room that the bodies from the hanging room above would fall into. Barry said, "I some how knew, that that was the room that they dropped them in".
Ian then pointed out, "in all the time you've been chatting, you haven't actually told us about any ghosts." Barry was quick to reply, "shadow man. I smelt him." Ian wants some clarification, "is that your presentation for today? 'I went to a prison and I could smell a cig'."
Barry said, "I mean when you put it like that it sounds s**t."

Ian made some very good points about Barry's story. First off he reminded him "you were in a prison. Every room has a story. Every single room has an unpleasant story in terms of its inhabitant. Every inhabitant of that prison, guards aside, has committed a crime."
Given that HMP Shrewsbury was a Category B prison, it would have housed some pretty nasty offenders, therefore as Ian pointed out, "every single room in there contained someone who had a macabre story attached to them."
Ian told Barry that if his claim that you could feel a sinister energy in the albino's cell was true, then that should be true of everywhere the albino ever walked, as his crimes weren't actually committed in the cell. Ian summed it up well, "you only feel weird because you knew the story before hand."
If you can't wait for the next episode in the series, you can hear it first exclusively on Ian's Patreon page, where he gives backers who support his work early access to future episodes, and exclusive content.