What Does The Sensation Of Feeling A Spider Web On Your Face Mean? 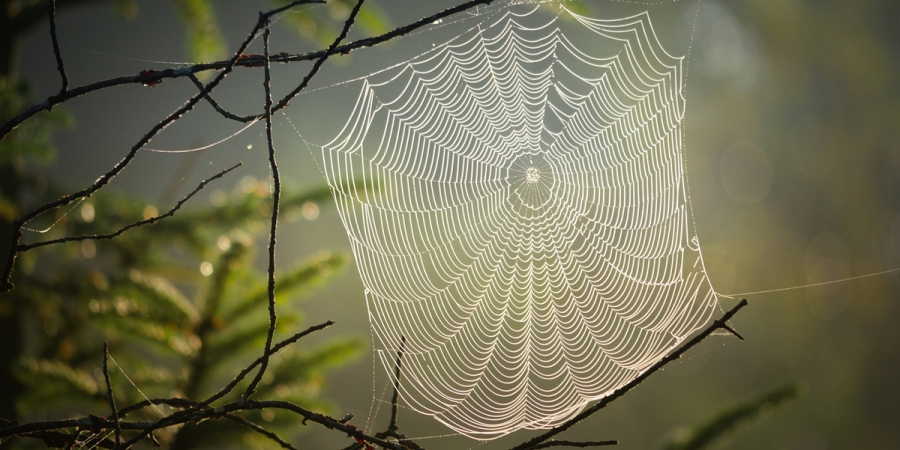 Photo: pixabay.com
Have you ever found yourself brushing a cobweb from your face despite being in a location where it's not likely there would be spider webs around?
What's strange about this familiar sensation of walking through a cobweb is that people report experiencing it in lots of different settings. It might feel like you're walking through a cobweb, but it happens when people are still, while sat on the sofa, driving a car or in a wide open space or large room.
The sensation can feel so much like cobwebs that it'll have you looking around the room for spiders only to find there are none. You might even try sweeping the fragile strands from your face, only to find there are none.
If this tingling feeling across the face isn't the result of a spider's web making contact with your skin, then what is it? Some within the paranormal field believe that this tickling feeling could be the result of being touch by a spirit, strings of ectoplasm or even contact with the veil that separates the world of the living and the spirit world.
Experiencing a physical sensation as the result of spirit contact is sometimes mistaken for clairsentience. Although this does mean "feeling" a spirit, it actually refers to feelings, as in emotions. It means an awareness of emotions from the spirit world.
Actually physically feeling a spirit's presence is closer to an ability known as clairtangency. A clairtangent is someone who has the ability to obtain information from the spirit world by touching an object, person, animal, or place. In the case of the spider web phenomenon the opposite is happening, you are being touched by the spirit world. There's no specific name for this tactile sensation of actually being touched by a spirit or spiritual energy.
Another possible paranormal explanation is the presence of an ethereal strand of the supernatural substance known as ectoplasm. This mystery substance has been immortalised as a slimy substance of ghostly origin in popular culture, but the phenomenon dates back to the Victorian era when mediums would produce reams of ectoplasm as part of their elaborate shows.
Ectoplasm started off transparent or even invisible, but as it was 'charged with psychic energy' by the medium it would become visible and more of a physical substance, which was white in colour. Could it be that those who are psychically charged themselves have an awareness of this invisible material, or could they even be causing the substance to become physical as it comes in to contact with them?
Another paranormal theory is proximity to the veil. This is said to be a barrier that separates the physical world we live in from the plane of existence that ghosts and demons inhabit - the spirit world. Of course no one has ever seen, touched or measured this invisible barrier. It's really nothing more than a metaphor for the spiritual bridge that must be crossed in order for mortals and spirits to collide, but some believe that passing close to this veil or even making contact with it could be responsible for that sensation like walking through cobwebs.
Like most things in the paranormal world, there are some more rational explanations for this sensation too. Phantom facial tingling can be caused by numerous things including nerve damage, migraines, multiple sclerosis, allergic reactions, and even stress or anxiety. Some people report a tingling, burning, or numbing sensation in their face and other parts of their body before, during, or after an anxiety attack.
Another possibility that seems very likely during ghost hunts is spores in the air. Moulds and funguses are commonly found in old or abandoned buildings, the type of places where investigations are often conducted. Moulds and funguses reproduce by releasing tiny spores into the air. These spores are so small that they have to be magnified hundreds of times before we can even see them.
Spores form colonies by attaching to a surface with a hospitable environment, this can be any surface ranging from walls through to nice warm human skin. Once on a surface spores can bind together to form a cobweb-like string. Although these strings are invisible to the human eye, they can be felt on the skin.
This could explain why this sensation is experienced in unexpected settings, a small draught could be enough to move the fungi and cause it to tickle or irritate you. Driving with the windows down or the blower hitting your face could also stir these fungal strings.
Others have blamed sudden dilation of the capillaries in the skin, which they say they experience when standing up abruptly, coming inside after being outside in a strong wind or exposure to cold air.
The other possibility of course is that this sensation of a cobweb on your face is in fact caused by cobwebs on your face.
We think of spider webs as being the familiar spiral structures, but spiders do also cast single strands of silk in order to safely lower themselves to the ground. These single strands of silk are very thin and almost invisible to the naked eye, but they can be felt on the skin.
Some small breeds of spiders have the ability to shoot one or more of these tiny threads to catch the wind, allowing them to become airborne and drift around under the power of air currents. The technique is called ballooning.
Of course we can't rule out a possible spiritual link to this sensation, but with several non-paranormal explanations for the phenomenon we shouldn't jump to the conclusion that these unusual tickles on the face are paranormal in nature, especially when there are potential serious medical causes. If you are experiencing this on a regular basis, you might benefit more from seeing a doctor than a paranormal investigator.
Add A Comment
Tags:
paranormal