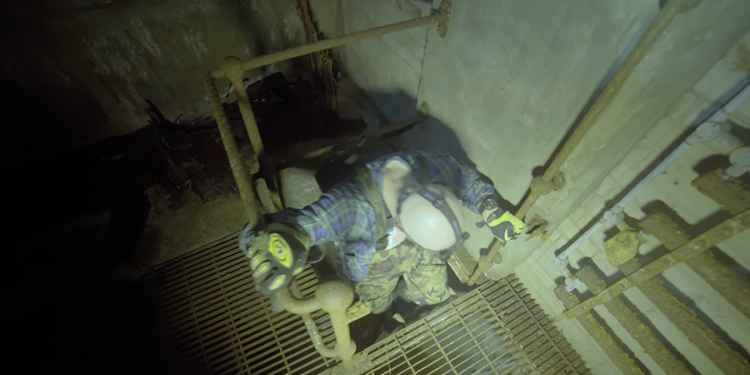 Photo: © Secret Vault
Urban explorer and self-styled bunker buster, Matthew Williams, has stumbled upon his best find yet, an amazing time capsule in the form of a secret bunker under Bristol.
In a video uploaded to his YouTube channel, The Secret Vault, the explorer is seen entering the untouched bunker that his been leftover and forgotten since the Cold War era.
Matthew hasn't revealed the exact location of the bunker in the city. He said, "we are not giving out this location due to a spate of vandalism and arson in Bristol recently at abandoned locations."
Matthew has suspected that the bunker, known as the Bristol Fort, has existed for some time, but he's been unable to pinpoint its location until recently. In the video, which was shot before the COVID-19 lockdown, the bunker buster gives his subscribers a complete tour of the abandoned secret facility.
The extensive bunker, spread over two levels, had working space for many of the city's essential government departments and local council services, as well as emergency services teams.
The bunker, accessible through a single entrance in the side of a cliff face, consist of one long corridor with nine double height vaulted chambers through doors off one side. At the end of the corridor is a hatch we could have been used as an exit in the event of an emergency.
The hideout was equipped with basic facilities including a toilet and air filtration systems. Each of the nine rooms still have their original use stamped across the door. This includes labels for spaces used by the city architect, medical officer, city valuer, city treasurer, city engineer, electricity department, docks department, rating department, education and libraries, clerk to justices and an archive.
Matthew found the bunker in reasonably good condition, although some water ingress has lead to minor flooding throughout.
Matthew's YouTube channel presents secrets, conspiracies and hidden facts, some of it right on the mark, some of it a bit wide. Presented mostly uncut so you can decide for yourself.
Watch more from The Secret Vault on YouTube
Tags:
secret vaulturbexundergroundbristol