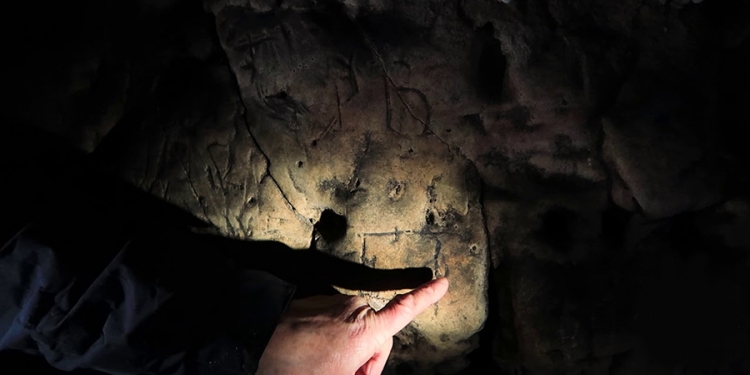 Photo: youtube.com
Plenty of people talk about being on the road to hell. AC/DC sung about a 'Highway to Hell'. Chris Rea penned a tube about being on the 'Road to Hell', but surely they were just singing metaphorically? A new discovery in a small cave in the East Midlands might have put paid to that idea.
At Creswell Crags, a limestone gorge on the border of Nottinghamshire and Derbyshire, heritage experts have found hundreds of examples of apotropaic marks – that's a posh way of saying signs that were made to ward off evil, misfortune, or even witches or demons.
What makes the site particularly interesting is that is also contains the only examples of very early ice age art in the UK, meaning man has been lurking in these caves carving things on the walls for millennia.
The sheer number and scale of the anti-witch markings means this site is of particular significance. How terrified must the local citizens have been that they spent time and effort carving over a thousand, and counting, of these marks into the walls of the cave?

What did the marks mean?

These kind of marks are more commonly found on churches or homes of the periods, and served to protect that location from evil forces, in whatever form that might be. Does the number of markings in one particular location actually mean something significant happened here, forcing the locals to take this kind of action?
Perhaps we could think of a similar modern equivalent to be the flowers left for Princess Diana on her death? Or the writing on walls near significant locations, like proclamations of love and adoration on the walls outside the Abbey Road recording studio as used by The Beatles, or the walls of Freddy Mercury's house in London?

The interpreter of the caves' heritage, John Charlesworth, told The Guardian that natural landscapes such as that around Creswell Crags would once have been regarded as a very scary place: "These are places where supernatural forces in an untamed non-human environment could be at work. Local people are in the jaws of this monstrous landscape."
The markings are believed to mainly have been made between the 16th and early 19th century by local residents and are believed to be Christian in origin. However experts have advised that the Christian nature of the markings shouldn't be seen as having some kind of official sanction by the church. They are more likely to be as a result of people harbouring their own superstitions.
It seems likely they believed the caves as a source of evil, and by placing the marks here they were stopping evil forces travelling up to terrorise them.
What were they frightened of? We'll never know, but if you're looking for an example of how people had a genuine belief in witchcraft and hauntings in the past, then this is all the evidence you need.
As of today, tours of the caves will include a chance to see the markings for yourself. So, if you find your holiday plans curtailed this year due to Brexit, and you fancy taking a trip to the gateway to hell, otherwise known as the East Midlands, find out more here – and good luck!
Tags:
witchcraftundergroundeast midlandstopical