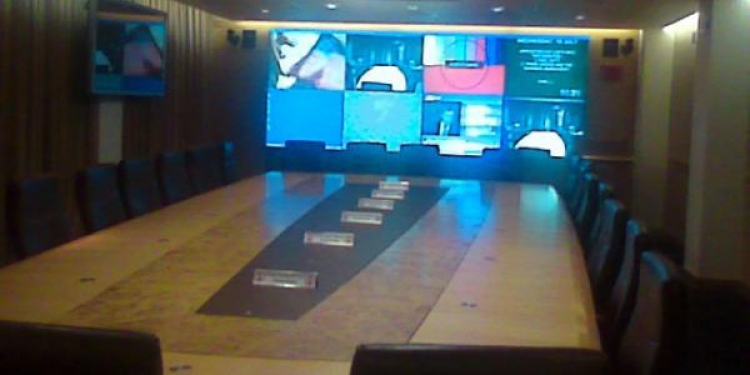 COBRA is an acronym commonly used in the press for Cabinet Office Briefing Room A, the briefing rooms are a suite of secure, hardened meeting rooms used in times of national crisis by various government departments. COBR is now a term used to refer to both the facility and the committee.

This is a highly secure briefing deep within the headquarters of the Ministry Of Defence.

The committee was formed soon after WWII and was originally housed in a suite of offices, believed to be on first floor of the Ministry Of Defence's headquarter on Whitehall in London. Unlike the Central Government War Room which was located in Corsham, Wiltshire, COBR offered no protection from attack.
So, although not confirmed, it makes sense that during the construction of PINDAR, a large bunker complex beneath Whitehall, in the 1980s that COBR moved in to this protected facility. In fact, £66 million of the bunkers construction budget was spent on an overhaul of the Crisis Command Center, which consisted of an upgrade to include the latest communications systems such as a huge situation room screen and video conferencing equipment, it's likely that this is the COBR facility.
The exact details of COBR are still classified as the briefing rooms are still frequently used. Only one photo from the site has ever been made public, in 2000, but the scale and layout of the facility is unknown.
The COBR committee generally chaired by the Prime Minister or another senior minister joined by other key MPs and representatives from other organisations such as the police and local government. The attendees depend on the nature of the crisis.
Each secure room is kitted out with a large briefing table, audio and video communications and large screen which can display intelligence information.
If housed within PINDAR, then COBR is situated within a larger facility spread over at least two levels, situated deeper than the London Underground. It's designed to support its government inhabitants for as long as is considered operationally necessary. The bomb-proof bunker contains bunks, catering facilities and a broadcast studio.
It is possible that PINDAR only exists its to support the Cabinet Office Briefing Rooms.
Tags:
undergroundlondonurbex