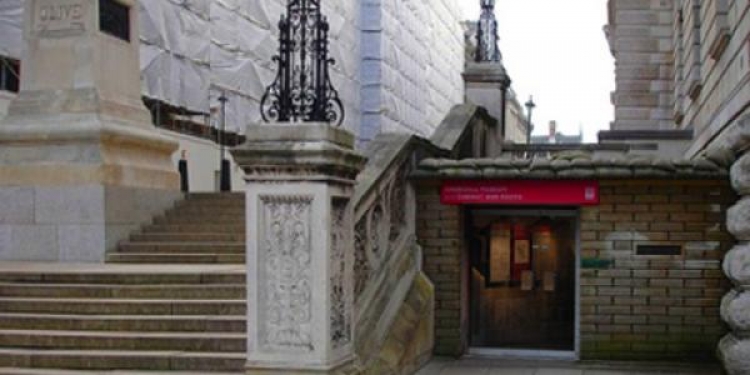 One of London's most famous tourist attractions. Situated under Whitehall in the centre of the Capital, the Cabinet War Rooms was Prime Minster, Winston Churchill's hideaway during the second, built in a reinforced basement beneath the treasury building.

This bunker is open to the public as a museum.

The Cabinet War Rooms was once the most important structure in Great Britain as well as one of the nation's best kept secrets.
The bunker was constructed under the Treasury building on Whitehall, the bunker went in to operation in 1939, in time for Churchill's government to move in to the command centre during the Second World War.
With the risk of aerial bombing over Central London, non-essential Government functions were moved out of the city to the Midlands or North West, while key government offices moved to the suburbs of London.
The Office of Works decided that the most suitable site for a government strong-hold in Whitehall was in the basement of the New Public Offices, situated on the corner of Horse Guards Road near Parliament Square, this build now houses the Treasury.
The basement was fitted with communications and broadcasting equipment, ventilation and the whole site was heavily reinforcement with a thick layer of concrete known as "the Slab."
The bunker's Map Room was vital to the nation's war efforts, it was manned 24/7 by representatives from the navy, army and Royal Air Force, they were responsible for producing intelligence summary for the Prime Minister and the heads of military.
The complex also included staff dormitories and private bedrooms for military officers and senior ministers. Churchill's office doubled as a bedroom and was fitted with BBC broadcast equipment, which he used four times to address the nation. There was also general office space for typists and telephone switchboard operators.
In total 115 cabinet meetings were held at the facility but despite its heavy use, Churchill only slept in his accommodation on three occasions, preferring instead to stay in 10 Downing Street.
The Cabinet War Rooms were abandoned in 1945 as the war came to an end, but the site stayed in the hands of the government who maintained it and protected it for its historic value.
Initially the public was invited to apply to visit the complex in limited numbers, thousands applied and very few were successful. In the early 80s, with the backing of Prime Minister Margaret Thatcher, the Imperial War Museum took over caring for the bunker and the Cabinet War Rooms were opened to the public.
Proving a popular tourist attraction, the bunker has been maintained and improved, it underwent major development works in 2005 and in 2012 had a facelift in the form of a new entrance.
The new bronze entranceway acts as a "beacon" for the museum, passed the entrance the interior has been striped back revealing the restored stone walls of the Treasury building.
Tags:
undergroundlondonurbex