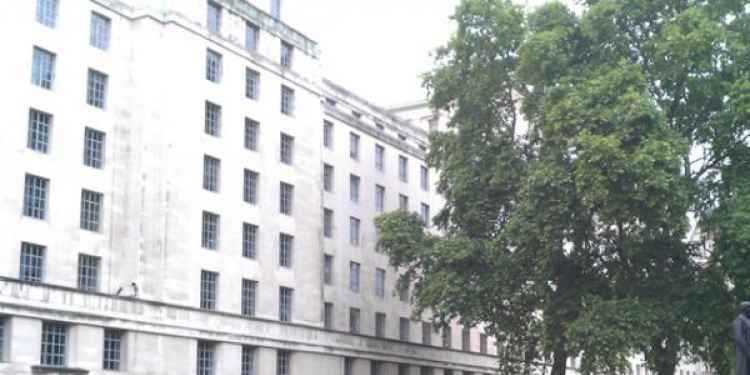 PINDAR is a secure government bunker complex, constructed in the 1990s beneath the Ministry of Defence headquarters on Whitehall in Central London.

This is a highly secure Ministry Of Defence location, officially it doesn't even exist.

Hundreds of tourists and commuters walk along Whitehall in Central London every day, from the House of Common to Trafalgar Square, passed Downing Street and the imposing Ministry of Defence headquarters.
What these passers-by may not realise is beneath the pavement, deeper than London Underground's District Line is a huge bunker, kept secret for over four decades, code name PINDAR.
Plans were drawn up for a super secure bunker, right beneath the Ministry of Defence's HQ in 1979, the facility was to become the Joint Operations Centre. Construction started eight years later within the shell of a Second World War Crisis Command Centre, part of which has remained operational post-war.
It took five years for the bunker to be completed at a cost of £126 million, a large chunk of the bill was spent on an overhaul of 50s Crisis Command Centre. The command centre was upgraded to include the latest communications systems such as a huge situation room screen and video conferencing equipment.
The original plans for the bunker called for a small, short term facility but the role of PINDAR was expanded in the mid 80s to act as a secure meeting place and provide the Government with a protected crisis management facility. It's designed can protect its inhabitants during and after nuclear attack or during civil unrest.
Safe behind a series of bomb-proof doors and spread over at least two levels, the bunker is fitted with bunks and accommodation for its staff, catering facilities and toilets designed to support operations for as long as necessary. The facility is fitted with a broadcast studio to address the nation.
Should the worst happen, a variety of exit routes would enable PNDAR's inhabitant to escape if the MOD building above it should collapse. The whole bunker is shielded against electromagnetic pulses, a side-effect from a nuclear detonation, which are capable of damaging electronic equipment.
Despite its proximity to the District Line on the London Underground network, PINDAR is not connected to any transport system, although it is rumoured to have an underground connection to Downing Street.
PINDAR is always manned by a permanent staff, but should it be put in to full operation use, it would house the heads of government, senior military and civilian personnel, emergency service and civilian support staff.
The bunker's Crisis Command Centre is currently used several times a year for simulation purposes to play out war game scenarios. It's likely that this part of the facility houses COBR, an acronym which not only describes a briefing room but a comity which springs to action in the event of a national crisis, Cabinet Office Briefing Room.
COBRA, Cabinet Office Briefing Room A is often mentioned in the press. It is generally chaired by the Prime Minister or another senior minister joined by other key MPs and representatives from other organisations such as the police and local government. The attendees depend on the nature of the crisis.
The exact details of COBR are still classified as the briefing rooms are still frequently used. Only one photo from the site has ever been made public, in 2000, but the scale and layout of the facility is unknown.
Tags:
undergroundlondonurbex