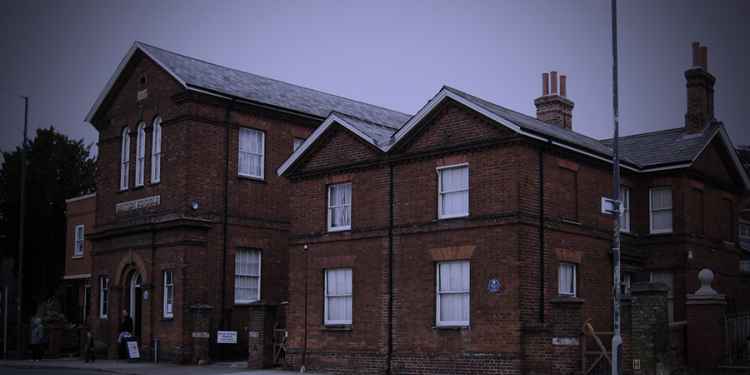 In the early 19th century, Hitchin was a grim place to live - a slum with high crime rates and no prospect for those living there, but in 1810 the benevolent and visionary schoolmaster, Joseph Lancaster, opened the Dead Street School. The school gave young boys and girls the chance to get formal, and above all cheap, education.

The street it was named after got its name after every family living on the road died of the plague, when it swept through Hitchin in 1349. The road is now known as Queen Street, but a plague pit is still known to exist at the top of the road.
The plague wasn't the only thing to cause mass death on the street. In 1856 the "great fire of Dead Street" destroyed the street, killing many in its path and also burning Lancaster's school to the ground. A replacement schoolroom opened the following year, and is now the last remaining purpose-built monitorial schoolroom in the world.
With so much suffering in the area, and so many passing through its doors, it' no surprise that the building, which is now the British School Museum, has a few ghost stories to tell.
One guest to the museum saw a man looking over the wall at the raised end of the playground before walking into the toilets. Thinking it was one of their party, they followed him into the toilets only to find they were completely empty. In the main schoolroom, which was once a place of learning for 300 boys, staff have heard disembodied footsteps and frequently report the unnerving sensation that they are not alone.
Through a fire escape in this room and into a back corridor, you'll find the spot where a small, dark shadowy figure was caught on CCTV. Despite many attempts to recreate the phenomena, the cause of the shadow is still a mystery. In a small adjoining classroom, which is now set up to resemble a school room from the time of the Second World War, local paranormal investigators believe they have had intelligent responses from spirits using ghost hunting gadgets.
The gallery classroom is a small, auditorium-style room that would have once had 100 boys crammed into it. Staff have reported hearing the lids of the wooden desks slamming and furniture being dragged around, even while the room has been locked and empty.
Also on the site is the headmaster's house, which the staff refer to as Mr Fitch's house. Fitch was the longest serving headmaster at the school. When he retired he remained in the house and eventually died in the parlour of old age. Since then unexplained footsteps have been heard upstairs when the house is empty, and a shadow figure has been seen walking around the upstairs.