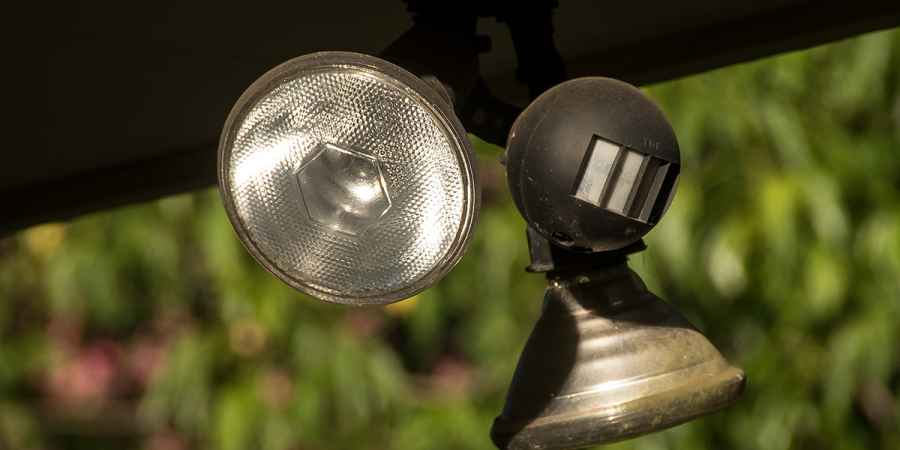 Ever been freaked out when a security light has come on or a home security camera has started recording because the device's motion detector has triggered it, but there's nothing there?
It's not uncommon for a motion detector to pick up phantom movement, but what's causing this? A simple malfunction, a ghost or something else?
There are several types of motion sensors, but the type found in motion detection cameras, lights, and sensors used in home security systems are generally a type of passive infrared (PIR) sensor called a pyroelectric sensor.
Some ghost hunters actually keep these sort of sensors in their kit bag and use them on paranormal investigations to detect movement in an allegedly haunted location. While they might be handy for detecting unexplained movement, there's no reason to think that these types of sensors can see ghosts.
One thing we know about ghosts is that they don't like to be seen. Often they're heard but not seen, their presence is felt, or they are merely invisible entities that ghost hunters attempt to communicate with using paranormal tools and Ouija boards. We also know that ghost can pass through solid objects. This tells us that ghosts aren't solid and they don't have any mass.
PIRs work by detecting the tiny amounts of heat that is emitted from the human body in the form of infrared radiation. This is why they're called passive sensors, they don't have a light source themselves like a night vision camera. If an intruder comes into your home, the introduction of their body heat is enough to trigger the alarm.
They can also trigger if something much smaller like a pet moves around the room, although the sensitivity of a PIR can generally be adjusted to ignore pets.
The sensors can't "see" or detect visible light, so the only way it could detect a ghost is if the entity was radiating heat in a similar quantity to a living human body. This is a little problematic because incidents of people feeling a warm ghost pass through them aren't reported, in fact it's the opposite - cold spots are more commonly associated with hauntings.
Here's the science bit...
In order for something to emit heat it needs to be a solid object and it needs a mass, something we've established ghosts don't have. How do we know this? Well, all thanks to a familiar equation attributed to Albert Einstein... E = mc².
To simplify this and avoid getting too deep into a physics lesson, in the equation the E is energy, so this tells us that the energy of an object whether that's a star or a ghost is equal to m x c². The m refers to the object's mass. In the case of a ghost the mass is zero. So ignoring the slightly more complicated c², anything multiplied by zero equals zero.
A ghost with zero mass (m) has zero energy (E).
It's not quite as simple as this, as light has no mass either, but it gets its energy through its motion and actually falls under another lesser-known equation, E = pc. However an object that is at rest and has no mass, not only has no energy, it also doesn't exist according to the rules of the universe.
So if it's not a ghost setting of a motion detector in an empty room, then what is it?
There's a few things that can result in a motion detector giving a false alarm when there's nothing there. Because lights are a source of heat, even LED lights to some extent, a light turning on can be registered as movement by a motion detector.
The sunlight coming in through a window or sweeping across a room can also be enough to trigger an alarm. Normally this happens slowly and gradually enough that the detector ignores it, but it can happen in certain situations like blinds or curtains being opened, a blowing tree outside blocking the light, or a parked vehicle outside a window driving away and letting sunlight in.
Dust caught in a sunbeam can also trigger a motion detector. If the dust is brightly illuminated by the warm sunlight and close to the detector, then from its point of view the dust will appear to be much bigger and hotter than other objects in the room causing a false alarm.
Although these sort of motion detectors might not stand a chance of detecting a ghost, they're not completely useless on a ghost hunt. Since the most observed phenomenon on ghost hunts tends to be doors slamming, objects moving or being thrown, or unexplained knocks and bangs, a PIR might help you to detect or even debunk these things.
Placing motion sensors around a location in empty rooms might help you if you hear a sound. If you're in another room and you hear a bang, you might not be able to work out where the sound came from, but an alarm sounding will be able to alert you to the exact room should any movement have occurred, whether that be paranormal or just something falling over.
Add A Comment
Tags:
scienceparanormalghosts