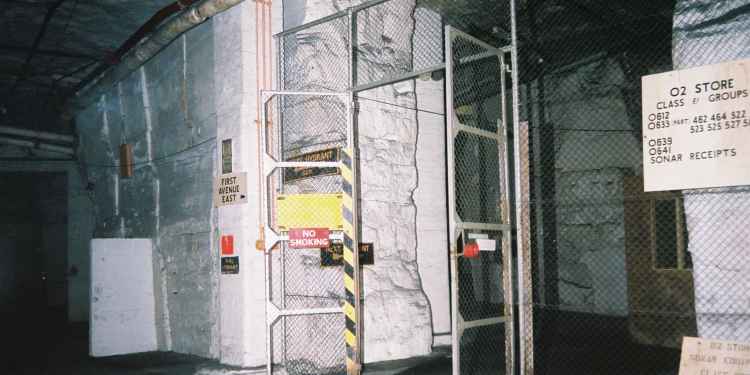 I finally managed to get my hands on a CD I've been interesting in listening to for well over a decade. The album is by a electronic act called c4i and the albums is called 'Copenacre'. The reason that this unusual 1999 release appealed to me was because it's inspired by somewhere I know very well, Copenacre Quarry in Wiltshire.
I visited Copenacre in Corsham back in 2008 for a tour of what was a self-contained underground Navy facility used for the storage and testing of a whole range of military electronics and technology. It operated until September 1995 and the site was sold off two years later.
c4i's six-track album is an electronic soundscape inspired by the industrial sounds you might experience underground in Copenacre. The experimental sounds are peppered themes relating to the bunker's links to command, control, communications, computing and intelligence.
c4i, the collaborative project of Ashley Davies, John Everall and Joe Banks, say they were founded in the intersection between electronic warfare and electronic music. Although 'Copenacre', their second release, is a stirring listen, the sounds aren't really reminiscent of Copenacre Quarry, especially as it lies abandoned and decaying today.
Since 2020, you've actually been able to listen to the album for free on Bandcamp. All six tracks are below...
Although the CD is unusual, I really like track four, entitled 'Static Access'. It contains various mechanical and industrial noises, including what sounds like a Formula 1 air-impact wrench.
The album may only be six tracks, but it still clocks in at just under 50 minutes, with one track alone lasting 12 minutes.
1. Grade Of Service (8:15)
2. Gate Steal (7:12)
3. Guard Space (12:30)
4. Static Access (6:06)
5. Ghost (5:39)
6. Deception Control (10:03)
The sleeve of the CD release recommends Nick McCamley's excellent 1998 book, 'Secret Underground Cities'. It also includes the following text...
A concrete rotunda on the north side of the A4 Chippenham to Bath road at Corsham, Wiltshire, UK, offers the unusual spectacle of a raised loading bay without visible warehouse access - the rotunda is only just big enough to accommodate the bay itself. It stands directly on top of one of the former Bath and Portland Company limestone quarries from which the fabric of the city of Bath was cut - which, offering around 100 feet of solid overhead rock cover, provided one of the most secure locations for the centralisation of certain aspects of the UK national infrastructure.
Copenacre Quarry was acquired by the military during WW2, and from 1969 to until its official closure in 1995 served as an artificially grounded testing and storage facility for Royal Navy radar, sonar, communications and electronic warfare equipment, providing subterranean employment for 1,700 staff. Local rumour alleges its use for the storage of Polaris nuclear missiles. Now it waits - (recycling the language of a wartime newspaper report) a disused Temple of Mars in the vast underworld of this land of hidden cities.
Tags:
undergroundurbexmusiccopenacre quarry