Yvette Fielding and her team of supernatural sleuths from the long-running ghost hunting show Most Haunted, captured their most explosive paranormal activity to date, in an upcoming episode recorded at Derbyshire's Codnor Castle Cottage.
The team were investigating a haunted farmhouse, built within the grounds of the medieval Codnor Castle, which is now in ruins after it was dismantled in 1643. The stone was sold on and used to build the cottage, as well as others in the area.
This one-time family home is said have been plagued by death, murder and suicide, including one of the previous owners who allegedly killed himself by jumping from an attic window in the 1950s. Many have witnessed dark shadows, poltergeist activity, and disembodied voices, from cries and laughter, to blood-curdling screams in the cottage. There also said to be a negative energy, which lurks in the attic.
As part of the two-hour special which airs on the Really Channel this Friday at 10pm, Yvette had placed a creepy looking doll in the attic of the now derelict family home. She said the doll had been sent to them and was supposedly cursed.
The doll was left throughout the night with a locked off camera placed in front of it. This is a common technique for paranormal researchers who use objects like dolls as "trigger objects," their hope is that if any spirits interacted with the doll and it moved, it would be caught on camera. But what the team did catch on camera was far more dramatic than they could have ever imagined. 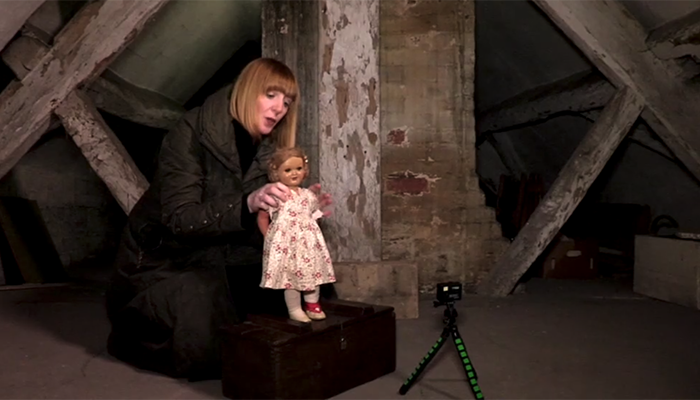 With the doll in place, the show's resident skeptic, Glen Hunt said, "I just don't buy into the idea of moving dolls." Host, Yvette was also a but skeptical about the story of the cursed doll, as was her husband and the show's executive producer, Karl Beattie who said he didn't believe a doll could be cursed, "it's a step too far for me to believe that." He added that dolls were "for love, kids grabbed them and cuddle them. So I find it very strange that they can be haunted or cursed."
However, towards the end of the show, Karl admitted that his opinion had changed after the doll suddenly caught alight. At the time of the fire, team members Stuart Torevell and Fred Batt were in the attic area. Fred was calling out to the spirits of Codnor Castle, using his skills as a demonologist.
"Lucifer lord of the underworld, come forth. Come forward and see us," called Fred before he was suddenly interrupted from his demonic incantations by the flicker of flame in a room at the other end of the attic.
A cutaway to the camera fixed on the doll showed it suddenly burst into flames without any obvious source of ignition and no sign of anyone around. The doll was in almost complete darkness, so if there had been a candle or another source of flame this would be visible. The flame started on the dolls left leg and quickly spread up the back of the toy.
Fred was first to notice the fire, "what's happening down there?" Stuart, who was manning the camera shouted "holy ****, what is that?" and ran to the room at the end of the attic where the doll had been placed. On seeing the eerie toy, he screamed "no way! The doll's on fire!" And called for the others using his walkie talkie. 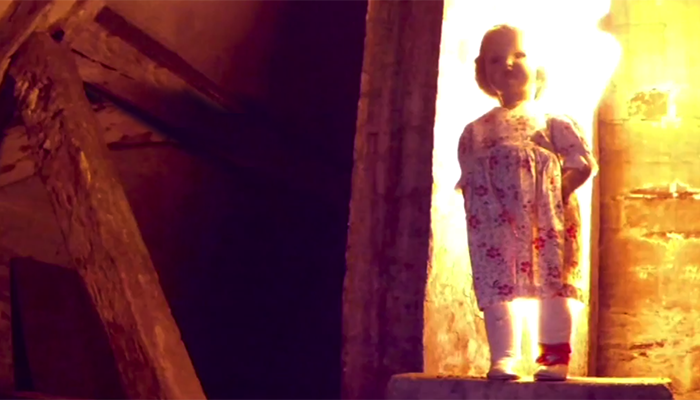 Stuart at first tried to blow the doll out like a birthday candle, before knocking it off of its plinth and stamping it out, "how the hell did that happen?" he asked.
Yvette eventually arrived on scene and was amazed by what she was seeing, "a thing has just spontaneously burst into flames, should we not be worrying? Should we really be here?"
Glen chipped in, saying that what had happened to the doll is exactly the reason why they should be there, "if you're thinking on the grounds of the paranormal, then we should be here, this is exactly the kind of thing we hope for isn't it." And he seemed pretty convinced that this was genuine evidence of the paranormal, "I'm looking for any signs of tampering, if anyone's put any charges in her or anything, there's no signs of that."
With the doll safely extinguished, the team then discussed what should be done with it. Karl shared his thoughts, "I think we take it out to the bloody field," Fred added "they need to be buried about three foot down."
However, the doll avoided being thrown into a shallow grave and was given to Gary Williams, a retired fire fighter from the Cheshire Fire & Rescue Service. He said, "after examining the doll, I found no ignition source, or any accelerant used." He described the cause of the fire as "unknown."
Tweeting about the incident, Glen said, "it was examined by an independent expert in that field. He couldn’t find any cause. Nor could I at the scene. To this day, it remains unexplained. Weird." 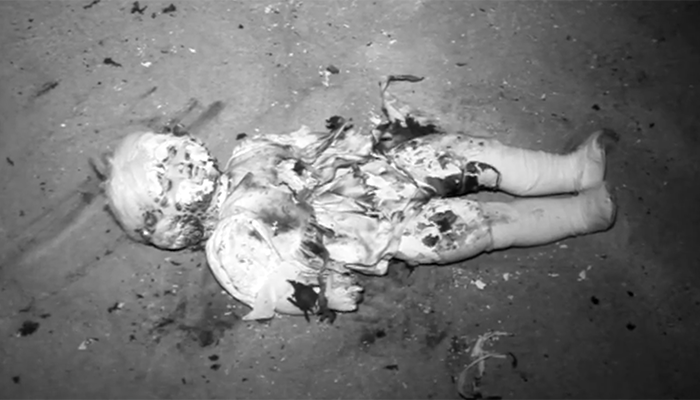 Although the episode doesn't get its television debut until Friday 2nd March, fans who have already watch the episode via the UKTV Player have been sharing their thoughts on the episode online. Gill tweeted, "oh my word Yvette that doll, bury it like Fred said. We were so flabbergasted. Never seen that before, scary."
Helen was equally as impressed by the alleged paranormal incident, "omg omg, just watched doll going up in flames!! So scary." Mike said, "so I've watched next weeks #MostHaunted #AsLive and I'm absolutely baffled, shocked and utterly confused, best f**king episode EVER!" While Loraine simply said, "never trusted dolls!!"
There have been some rumours circulating that the Codnor Castle Heritage Trust were unhappy with Most Haunted's involvement at the Codnor Castle site.
The trust recently dispelled this myth in a Facebook post, in which they state, "we wouldn't normally comment on rumours." They go on to address the issue once and for all, "we are delighted with the way our friends on the Most Haunted team have helped us to raise the profile of Codnor Castle, and we look forward to a long and happy association with them."
They added that "their involvement means we are free to concentrate on the all-important (to us) heritage and education issues, which is the reason we handed over the administration of paranormal events to them."
However, not everyone is as convinced that the flaming doll is genuine proof of the existence of the paranormal. Some viewers noticed that there was a red band on the doll's leg where the fire started. But, the official word is that this was a red ribbon that came with the doll, presumably to keep the shoe on.

#MostHaunted #Codnor
I don't want to spoil it for anyone but it is rather obvious as to how the ignition of the doll at the end of the Codnor Farmhouse episode was done and the paranormal is not involved in any way. @Yfielding @realkarlbeattie @RadioGlen @demonologist666 pic.twitter.com/wNF0057gH5

The two-hour "as-live" special, is produced in the same style as one of the live shows, meaning everything seen is unedited and uncut. But this is only the first part of the gang's night at Codnor Castle Cottage, the second part of the investigation will air as a regular episode next Friday night.
The new series of Most Haunted continues on Really. Watch on Freeview (17), Sky (155) and Virgin Media (129), or watch previous episodes of Most Haunted on demand on the UKTV Player.
For reviews of all of the new episodes, plus highlights and evidence from the shows, and to find out when Most Haunted is on next, visit the Most Haunted episode guide.