What The Experts Think: 'Ghosts Of Morgan City' Apparition

The US television show 'Ghosts Of Morgan City' have captured possibly the best apparition ever seen on video, but what do paranormal experts think about the evidence? 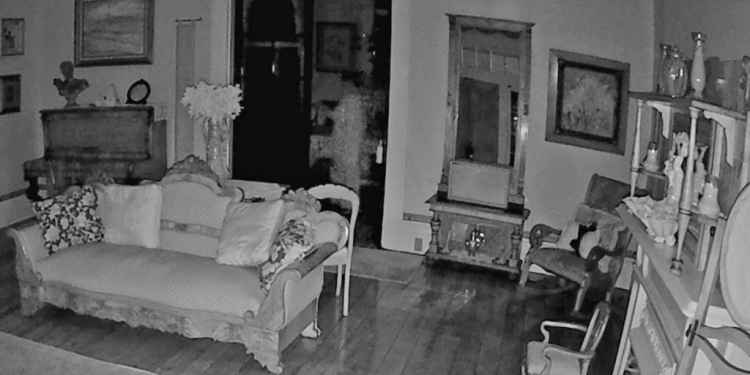 The full-bodied apparition of a girl in a white dress caused a bit of a storm in the US when it aired there back in July in the third episode of the American ghost hunting show.
Now the episode has aired in the UK as part of the Really channel's #13NightsOfFrights, which is bringing viewers 13 consecutive nights of paranormal shows over Halloween.
'Ghosts Of Morgan City' features paranormal investigators Ben Hansen - a former FBI agent, Jereme Leonard and Sarah Lemos as they search for ghosts in various haunted locations in Morgan City, Louisiana.
Unsurprisingly, reaction to the show within the paranormal community has been just as widespread here as it was in the US when viewers there first saw the evidence the team captured in the episode entitled 'Blue Shirt of Idlewild'.
The figure, which appears to be of a young girl, was seen walking through the dining room while the house was empty. It was caught on a static infrared night vision camera at a house in the Idlewild Plantation in St. Mary Parish, Louisiana.
Since the show aired on this side of the pond, paranormal experts have been having their say on the footage. The general consensus seems to be that the clip is strong evidence. Some experts are cautiously saying it the real deal, while other aren't willing to completely rule out a more rational explanation.
Some experts who have watched and re-watched the clip simply think it's a little too good to be true, making it hard to believe. The figure is so clear that it looks like a living human walking through the house in the dark. However the house would have been locked down during the investigation - and even if it wasn't, how often do strange children wander through your house at night?
Skeptical investigator, Kenny Biddle, wrote in his blog post about the apparition, "there is nothing about this video footage that would lead me to believe it's of a ghost". He bases this conclusion on his opinion that the crew's analysis of the footage is "heavily skewed toward the idea this is really a ghost", and the evidence presented to the viewer appears to be cherry-picked to push that idea.
He says the lack of timestamps in clip could allow the video to be manipulated, "footage can be cut and pasted in any order to create whatever situation is wanted."
Barri Ghai, who knows first-hand what goes into making a ghost hunting television show said that he is 100% convinced that there is no fakery or trickery involved. In a tweet the 'Help! My  House Is Haunted' investigator wrote, "I know the time constraints when filming and I 100% believe that Ben the team and crew of #GhostsofMorganCity would not undermine their reputations and credibility to fake something like this. It's either a real child which I doubt, or genuinely one of the best ghost videos ever!"
Paranormal investigators, Cee n Dee, tweeted "I will say, if someone is gonna make a fake would it be that solid of a figure? Who knows, but yeah 'wow' to that capture."
One paranormal YouTuber wrote, "suspiciously clear and solid....but there have been many many accounts of ghosts appearing in a solid form so maybe, just maybe..."
The Haunted Hunts' Danny Moss agreed with the previous comment, "I'm with him on this one.... maybe, just maybe. I guess we'll never know," although he did admit, "when first viewing it I thought definitely fake, I'm still not convinced however.  It's a huge risk if they have staged it."
Danny added that he appreciated the way the team tried to debunk the incident, they even tried to re-create it. The show's lead investigator, Ben, posted a follow-up video on Facebook which gave additional details on the evidence.
In the Facebook video Ben presents some additional footage and talks us through the moments leading up to the capture of the apparition. Speaking over the footage, he says "about 40 seconds or so before the ghost walks by, a light goes on in the bedroom to the right, at the same time we see movement of someone or something in the mirror on the left-hand side in the parlour."
This footage of movement and the light turning on and then off again, which didn't feature in the episode, Ben thinks strengthens his argument as he thinks this is also the ghost. But, for some, like Kenny Biddle, the fact that someone is moving around in the house before the sighting just proves that it was a living person in the property.
Ben also says several times in the video that the figure the team captured is transparent, although most of the paranormal buffs who have seen the clip think this isn't the case. As the figure passes the table and chairs in the dining room these items are not visible through the apparition. In fact it's because the figure appears to be so solid that it looks like a human and not a ghost.
'Ghosts Of Morgan City' continues tonight as part of #13NightsOfFrights on the Really channel in the United Kingdom and Ireland as part of the Discovery family of channels. You can watch Really on Freeview (17), Sky (142), Virgin Media (129) and Freesat (160), plus YouView, BT TV and TalkTalk TV. Or watch previous episodes on demand on dplay.
Tags:
paranormaltelevisionhalloween 2019topicalghosts