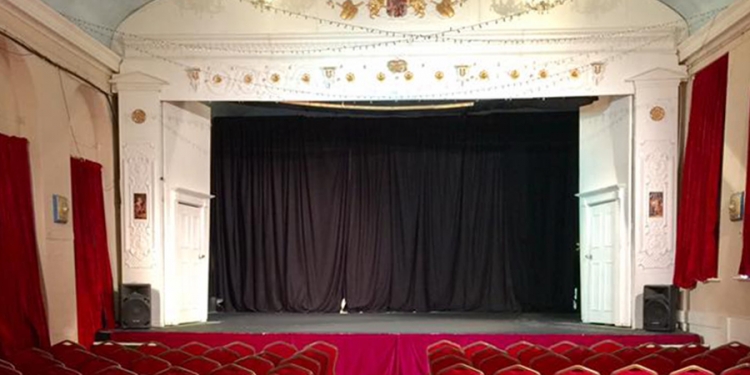 Photo: facebook.com
The Groundlings Theatre in Portsmouth is a popular location for ghost hunters with various paranormal events companies running events there.
Sadly the small privately-run performance venue fell victim to a recent burglary. During the raid the building near Gunwharf Quays was "completely trashed" putting its future at risk.
The Georgian theatre is said to be haunted by the ghost of a young boy known as Little George, who is said to have been mistreated and maybe even killed in the building. His ghost has reportedly been seen sitting on the stairs in the building.
The two men were caught in the act by one of the theatre's staff on the morning of September 29 after gaining access through the stage door, but by this point they'd ransacked the building, destroyed computers, smashed open the box office's till, and stole a safe containing £800 in cash.
After being confronted by the 22-year-old pantomime dance captain, the thieves simply greeted her with "hello darling" before making their exit through the theatre's entrance on Kent Street.
The carpet was damaged during the raid, seven doors were smashed off their hinges, and bleach was poured into computer equipment destroying important files, including cast lists, press releases and even the scripts for upcoming productions.
Although the theatre's alarm was triggered, the two men cut wires which resulted in the system being disabled and unable to alert staff to the break in.
The Groundlings Theatre is a personal favourite of television ghost hunter and demonologist, Fred Batt. Known for his appearance on the British ghost hunting show 'Most Haunted', Fred recently told us the theatre is "really active" and one of his favourite places to investigate.
During a recent ghost hunt at the theatre with members of the public, Fred said he and his guests made contact with a French spirit while using a piece of paranormal equipment that lets investigators hear spirit voices.
Fred said "this French girl came through and she was speaking in English, but you could tell it was a sort of broken English. And then she started saying a few French things. There was a French person there who was translating it and then all of a sudden the spirit's French voice came through on this app."
The theatre is currently gearing up for a production of 'Jack And The Beanstalk'. Groundling's artistic director Richard Stride told the local press that the show must go on despite the malicious damage.
The venue now fear that they may be facing a crippling rise in their insurance premiums as a result of the incident and are appealing for donation from the community to help them recover from the damage in the short term.
The burglary is hopefully that last in a bizarre but unrelated spate of break-ins and vandalism to haunted properties this year. The most recent being the theft of three lifelike model heads of historical figures from the haunted London Bridge Experience on Tooley Street at the end of August. Earlier that month the historic old jail in Derby was broken into and fell victim to criminal damage.
A week before that Boleskine House, which was where occultist Aleister Crowley once performed black magic rituals, fell victim to arson, and just 24 hours before that came news that vandals had targeted a historic haunted property in Warwick. A stone wall at Guy's Cliffe House was dismantled during the incident and signs were ripped off the building causing damage to its outer wall.
Tags:
paranormalhampshiretopicalgroundlings theatre