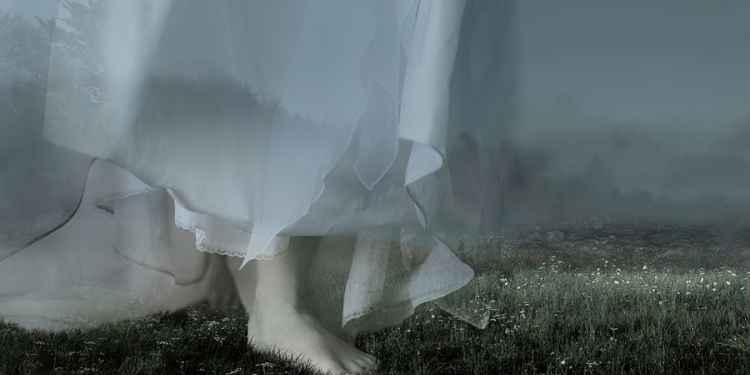 Photo: pixabay.com
People often ask how ghosts can be seen wearing clothes, surely the clothes don't have a soul or spirit, so how can a human ghost come back wearing them?
It's a really good question and a skeptic would say, a great way to debunk many ghost stories, but within the popular belief of what ghosts and spirits are there is an answer to this question.
Reports of apparitions wearing clothes are pretty common. There are countless reports of spirits wearing period clothing, like gentlemen in Victorian attire. Then there's grey ladies, white ladies, and green ladies - all seen wearing flowing coloured dresses that give them their name. Then there's dozens of tails of monks seen dressed in long robes.
In the case of long-dead soldiers running across a battlefield in uniforms, the ghost soldiers seem to be able to conjure up a supernatural reconstruction of their own clothing, even their weapon.
Chillingham Castle is said to be haunted by Lady Mary Berkeley, visitors to the castle say they have heard her famous grey dress rustling. In London's St. James's Park a figure, known as the Red Lady, is often described as wearing a red dress or cloak, sometimes she is said to be seen coming out of the lake.
One of the most famous ghost photographs of all time shows the Brown Lady Of Raynham Hall. In the photo the ghost, believed to be Lady Dorothy Townshend, is seen wearing what appears to be a long dress. Hellfire Caves in West Wycombe is said to be haunted by a young girl called Suki, her ghost his seen wandering through the caves in a Victorian wedding dress.
There's no imprint of a human's clothing embedded in their psychic energy yet these apparitions often appear with a supernatural reconstruction of their own clothing. Therefore it must be human psychic energy that is binding the clothing to the haunting.
A well known concept within the paranormal field is "stone tape theory." This is where psychic or emotional energy is said to be stored or "recorded" in the stone, wood or even the ground at a haunted location.
It's thought that this residual energy can be released by the material and the event is replayed. This can occur when the atmospheric conditions are similar to the time that the event occurred, on the anniversary of the event, or when someone who is in tune with that event is present.
At the time of the recording the ghostly image, a snap shot of consciousness may have been stored, this could include their thoughts or feelings at the time, and perhaps even the clothes they were wearing.
We can take this a step further. The stone tape image could also record tools they were holding, like the ghost of a station master seen with a lamp. If someone died in the torture chamber of a castle, then their restraints might be conjured back into existence through stone tape theory - after all, ghosts rattling chains are very common too.
Another common type of haunting is the apparition of a headless horsemen or phantom coaches, seen complete with the ghostly vision of a stage coach. Of course, this coach never lived and never died. Yet some how the memory of the coach has been stored in residual energy and attached to the coachman.
Some of these coaches even have phantom horses pulling them, further confirming that these are the result of stone tape, otherwise we'd have to assume that the coachman and his horses some how came back together to pull the ghost of a coach.
The reality is that the coachman may have died before the horses, and the coach may have been sold on after he died - there's no reason to assume they'd come back as ghosts together, which suggest this is a residual haunting. The witness is merely seeing a snapshot of the past.
There's even the phenomenon of phantom steam locomotives complete with carriages, yet no vehicles are living things. So, in order for them to exist as an apparition, we must agree that it is human consciousness which is manifesting these inanimate, soulless objects.
Perhaps the strong emotions of someone witnessing the train passing has created this residual image, or the energy leaving someone's body after being hit by the train has been bound to the location.
There are plenty of stories of inanimate objects being haunted, cursed or hexed, this can result in them moving by an unknown force. This can include haunted dolls, cursed jewellery or even ghost cars.
For the skeptics among us, all hauntings are nothing more than a product of the human brain so it seems fitting that we should attribute reports of ghostly garments to our own incredible minds, whether it be a fabrication, a trick of the light, or our ability to preserve the image of our possessions for eternity with nothing more than our own psychic energy.
Tags:
paranormalghosts