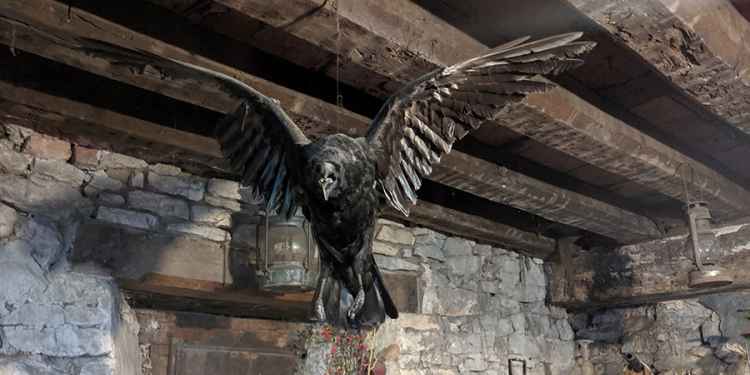 This week's ParaPod Movie Podcast features parts of Barry Dodds and Ian Boldsworth's appearance at a ParaPod Live event during the Nottingham Comedy Festival in 2019. While in front of the live audience at the Canalhouse Bar, the pair discussed a historic inn, which is said to be one of the most haunted in the UK.
The Ancient Ram Inn is one of the locations that appears in the ParaPod Movie, that the duo have been shooting, making and editing for the last three years. Next month the Barry and Ian start touring the UK with screenings of the film at various cinemas. Tickets are selling out fast, so be sure to check theparapod.com for ticket details sooner rather than later.
Barry tells us about their experience filming in the Grade II listed building in Wotton-under-Edge, as they follow in the footsteps of countless other paranormal researchers, including the television shows 'Ghost Adventures' and 'Most Haunted'. If there was ever a location where Barry could convince Ian that ghost exist, then surely the Ram Inn is it. Barry goes as far as to describe the inn as a mecca for ghost hunters.
"If you're into ghosts, you go to the Ancient Ram Inn. If you're into Islam, you go to Mecca."
Barry Dodds
It turned out that Ian did as much talking about the haunted location in this episode as Barry did. Ian recounted the story of the day they went to film. Unfortunately on the morning of their visit, they heard that its owner John Humphries had sadly passed away over night.
Barry then told us a little bit of the history of the building, starting out with the fact that its oldest part is 1,000 yers old, and the inn is apparently built on ley lines. He also tells us that when John was renovating the building, he dug a hole and unearthed a human skeleton, which some believe is due to the fact that the inn is also said to be built on a Pagan burial ground.
Ian laughs as Barry informs him that the inn is home to a succubus, a demonic entity that seduces and has its wicked way with its victims. A succubus is a female demon that preys on men, while an incubus is its male counterpart. Although Barry doesn't seem to fully understand the difference, he told Ian "one of them sits on your chest, the other one shags you."
Barry quickly takes us through some more of the inn's stories, blurting out "someone got murdered in the loft, if you're in the room you can hear her getting dragged about the place. In the garage section there's a dog, and someone took a weird photo on the stairs in 1999."

The episode was a little different to others as it flipped between the best bits of the live show and the normal set up. Unfortunately the live segments suffered from pretty poor sound quality, which was off-putting but didn't make it impossible to follow.
There wasn't much detail about the Ram Inn. Barry didn't offer up much fact about the alleged hauntings or their experiences there - presumably they would have carried out some kind of paranormal investigation while filming. Ian didn't challenge the building's paranormal claims much either, other than bluntly stating he didn't experience a haunting there.
If you can't wait for the next episode in the series, you can hear it first exclusively on Ian's Patreon page, where he gives backers who support his work early access to future episodes, and exclusive content. You can also support Barry on Patreon, to find out more about his ghost hunting adventures.