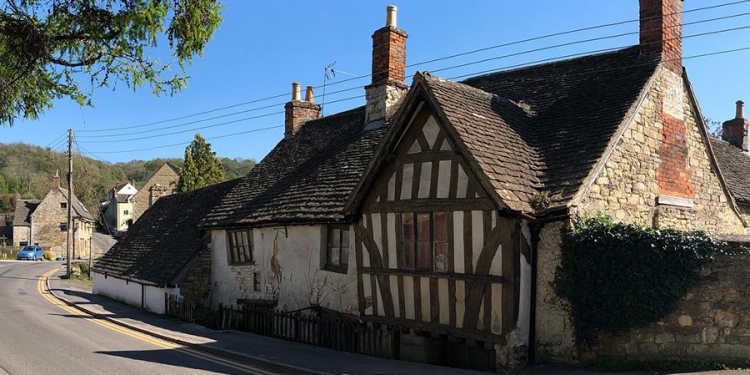 A small country pup in rural Gloucestershire often described as, not only one of the most haunted places in the UK, but in the world.

The Ancient Ram Inn is a small country pup in rural Gloucestershire village of Wotton-under-Edge. It is often described as, not only one of the most haunted places in the UK, but in the world.
The inn has a grim history, it started life under the ownership of the local parish and was used to house slaves working on the construction of St. Mary's Church. Since then the ownership of the inn has changed hands many times and guests have claimed on many occasions to have seen previous owners sat among the patrons.

The Ancient Ram Inn's reputation as one of the most haunted buildings in the country has been fuelled by its countless appearances in television shows, newspaper reports and paranormal blogs. It's been investigated by hundreds of paranormal investigation teams and played host to ghost hunting shows like 'Ghost Adventures' and most notably 'Most Haunted'.
It was during Yvette Fielding and her team's time here in 2004 that 'Most Haunted' crew member, Stuart Torevell had one of his most terrifying experiences. Towards the end of the investigation, Stuart fell to the floor and screamed for help saying "I can't move." Derek said "I felt him being walloped, he was hit fully in the chest and ribs."
Stuart said afterwards "I'd been punched in the chest, I'd been winded. And as I went down, I got punched again then. So, I got winded twice. I was like a young kid in a playground getting picked on and beaten up. When I went down I felt like I was being kick constantly in the stomach." The Ram Inn remains the one location that Stuart won't return to.
The Ram has a huge list of paranormal activity to its name. Is this because the building is so haunted or simply down to the sheer volume of paranormal investigators that have spent time at the location looking for it?
Some of the most commonly reported activity includes highly localised cold spots, temperature drops and unexplained icy blasts of air. There's also activity in the form of light anomalies seen with the naked eye and caught on camera. Doors are said to slam on their own, footsteps are frequently heard, furniture is heard sliding around and mysterious knocking is witnessed.
Sudden pools of water form from seemingly nowhere, and unpleasant odours are noted. Visitors claim to have been thrown out of chairs and felt unseen icy hands grabbing them, as well as a general feeling of unease, sickness and stabbing pains in the chest or back.
The supernatural phenomena at the Ram Inn is also said to present itself as strange mists, shadowy figures and ghostly apparitions, including the ghost of the murdered Elizabeth. She's often described as the Grey Lady. Others have even reported being physically dragged from their bed in the night by an unseen force.
The inn is also said to be haunted by a demonic entity that disturbs their victims while they sleep in order to seduce and have their wicked way with them. An incubus is a male demon that preys on women, while a succubus is its female counterpart. There's a bit of confusion as to whether the demon at the Ram is an incubus or a succubus. The truth seems to be that there's either both, or the demon at the inn switches depending on the gender of its victim.
Rev John Yates, a former Bishop of Gloucester, once unsuccessfully tried to exorcise the pub. He said after that the inn was "the most evil place I have ever had the misfortune to visit."

Yvette Fielding and the Most Haunted team investigated The Ancient Ram Inn in 2004 and it's is one episode no one on the team will forget, described as one of their most violent encounters to date. After the night vigils begin, a Ouija board is placed and soon after Stuart Torevell was attacked by a ghost in the barn. Stuart claimed to have been hit in the chest, ribs and head. The ghost also pushed Derek Acorah and Karl Beattie preventing them from assisting Stuart.

The Ancient Ram Inn Features In

More From The Ancient Ram Inn