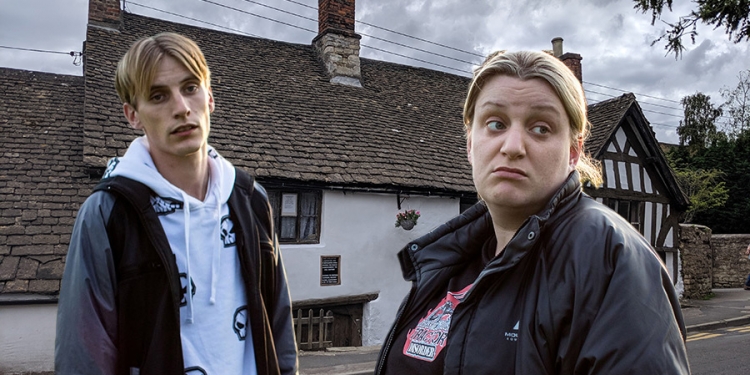 When the coronavirus restrictions were lifted in the UK, many headed to their local pub, but Daisy May Cooper and Charlie Cooper, stars of the cult BBC Three comedy show, 'This Country', headed to one of the UK's most haunted inns.
Following in the footsteps of countless other paranormal investigators and paranormal television shows, the brother-and-sister comedy actors braved a night at the infamous Ancient Ram In in the rural Gloucestershire village of Wotton-under-Edge.
Charlie, who plays Lee 'Kurtan' Mucklowe in 'This Country' confessed to being a little obsessed with the ghost stories relating to the inn. He told The Wotton Times, "we've been meaning to come here for years. We've watched every documentary, read so much about it. To be here now is amazing."
The inn has a grim history, it started life under the ownership of the local parish and was used to house slaves working on the construction of St. Mary's Church. Since then the ownership of the inn has changed hands many times and guests have claimed on many occasions to have seen previous owners sat among the patrons.
Daisy May, who plays Kerry Mucklow in the comedy series, said "it's just got so much character, it looks like it's got so much history and all we've ever wanted to do is get in."
The Ram has a huge list of reported paranormal activity to its name. Some of the most commonly reported activity includes highly localised cold spots, temperature drops and unexplained icy blasts of air, but despite its sinister reputation, the comedy duo felt quite comfortable there. Daisy May, who is pregnant with her second child, said "it's a really nice atmosphere." Adding, "yeah, I'm feeling good vibes."
Some of the other activity reported in the former inn includes light anomalies seen with the naked eye and caught on camera, doors slamming on their own, and the sound of unexplained footsteps. The sound of furniture sliding around and mysterious knocking is also frequently heard.
Daisy May and Charlie's night of ghost hunting included a Ouija board session conducted in the old bar area. With the help of a psychic medium, they believe they made contact with the spirit of a woman named Beth, who died at the inn in 1379. Could this be the spirit of Elizabeth who is believed to have been murdered and buried beneath the bar?
You might be thinking that after a scary night of ghost hunting, the siblings might have tried to get some sleep in one of the haunted bedrooms, but one of the inn's most sinister spooks is said to be a demonic entity that disturbs their victims while they sleep in order to seduce and have their wicked way with them... so perhaps not.
The Ancient Ram Inn's reputation as one of the most haunted buildings in the country has been fuelled by its countless appearances in television shows, newspaper reports and paranormal blogs. It's been investigated by hundreds of paranormal investigation teams and played host to ghost hunting shows like 'Ghost Adventures' and most notably 'Most Haunted'.
Tags:
paranormaltopicalthe ancient ram inncomedy