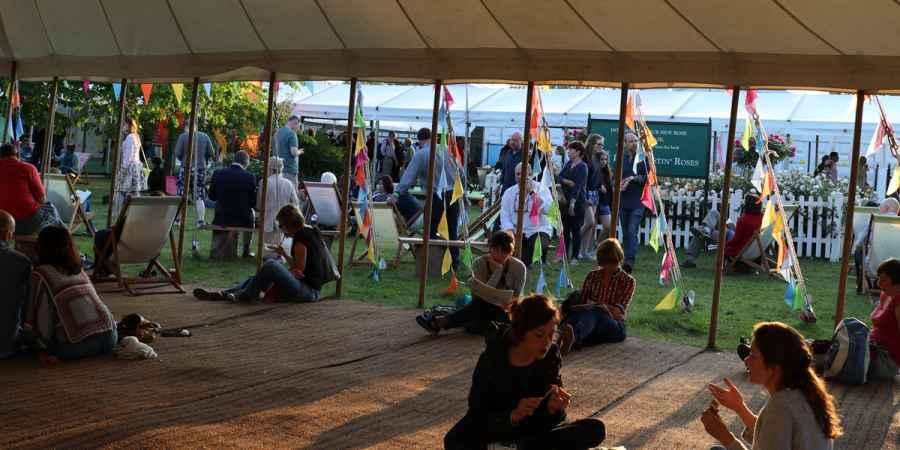 Photo: © Andrew Lih
After two dramatic episodes featuring a haunting in Newfoundland, the 'Uncanny' summer special comes to an end with a live edition recorded at the Hay Festival in Wales.
The hour-long special was recorded at the annual arts and literature festival at the end of May and premiered on BBC Sounds this week. As always, the supernatural podcast was hosted by Danny Robins, who was joined by two of the regular paranormal experts from the series, Ciarán O'Keeffe and Evelyn Hollow.
The special started with a quick update on Scott and his dad Brian's case from the previous two episodes that kicked off the summer special. Danny mostly talked about the theories sent in by listeners which could explain that paranormal activity that Scott and Brian experienced in the holiday home in Twillingate. He explored everything from the possibility that rocks being thrown around by the ocean in sea caves under the house might be responsible for the sounds heard there, to the loud cracking sounds produced by breaking icebergs.
Listeners also shared theories about Scott's shaking bed, suggesting that an earthquake could be to blame, and even posed a theory involving dodgy wiring that could explain how someone could be thrown from their bed in the middle of the night.
Then it was time for some new stories. Danny told the audience in Hay-on-Wye, "since the show came out last year, we've received hundreds probably 1000s of emails from people who have experienced a ghost. So tonight, I have chosen a selection of some of the most intriguing, odd and frightening stories from my casebook. Each of these is a brand new case."

In the first case we hear from Amanda. Her story takes place when she was a baby living in an old farmhouse in Bleasby, Nottinghamshire. Amanda's family moved out of the house when she was three, and she didn't remember what had happened until she was told at a family gathering when she was 12.
She first heard from her grandparents how they had seen the figure of a woman in the corner of Amanda's bedroom. Her parents then told her that they had seen the same figure, describing it as a woman in a grey old fashioned dress sitting in the corner.
They went on to tell her that one evening they heard a crash from upstairs and the sound of something moving. They both ran upstairs to find baby Amanda, who they'd left in her cot and was too young to climb out, being walked around the room. Her parents said that no figure was visible, but it looked as if she was holding a pair of adult hands.
A few years after discovering all of this, Amanda and her dad went back to the village to look at the old farmhouse they used to live in. They met a lady who now rents the back half of the house and were due to move out imminently, but she asked them if they'd like to look around the house. As Amanda walked along the lane towards the house with the woman, she confessed that she had also seen the figure of a woman in old fashioned clothes in the same bedroom.

Next the festival goers heard from a former firefighter in Northampton named Tony. He was called out to a house fire one morning. While his colleagues dealt with the blaze, Tony saw an old lady shuffle down the garden path of the adjoining property. He had a conversation with her over the garden gate in which she told him she wasn't happy due to all the noise.
Tony told the ranking officer on scene about the old woman's complaint. His superior was with the owner of the property where the fire had broken out. He told Tony that nobody was living next door. When Tony described the old lady to him, the property owner said, "that's Mrs Wilson, but you couldn't have seen Mrs Wilson because she's dead." The firefighters then checked the house next door and found that it was completely empty.
Tony told Danny, "it couldn't have been somebody from another house because the only way to get into the rear garden would have been through the garage and up the rear garden path. The garage at the back of the house, they've got old doors and I very much doubt if she'd have the strength to push the garage door open on her own."
He added, "the house on the other side of the old lady's house had large bushes and to get over the wall into the lady's house, you'd have to push your way through the bushes and climb over a wall. Why would an old person want to do that?"

The third story came from Laura. When she was 14 back in 1993 her parents let her regularly travel from Essex with a friend to central London to buy CDs. On one occasion Laura's friend was ill. Laura was desperate to buy a particular CD, so she lied to her parents and went on her own, which was forbidden.
Everything was fine until Laura walked out of the flagship HMV music store on Oxford Street. She said, "as I went to leave, I stepped out of the store and things were not normal. Instead of the usual buses, cars and people, I saw horse-drawn carriages, handsome cabs, people in old fashioned dress scuttling across the road, women walking with baskets selling apples, and I believe a hot chestnut stall."
It seems Laura had experienced a time slip. The experience only lasted about a minute but felt totally real to Laura. She said, "time slips are a thing and it happens, Danny. It's like something in the universe shifts, we get a glimpse of life gone-by."

The final case in the episode revolved around comedian, Jason Manford. In an interview recorded before the festival, Jason told Danny how he'd had an unsettling encounter while he was part of the cast of Sweeney Todd in London's Adelphi Theatre back in 2012.
Being away from home for an extended period of time, each night Jason would talk to his twin daughters on a video call. Things started to get odd when one of his daughters said to him, "daddy, who's that man behind you?" But of course, there was no one in the room with him.
A few nights later his daughter said, "daddy, he's back." Jason said, "the third time that it happened, I thought I'll quiz her." So this time, he asked what the figure looked like. His daughter described a tall man with a moustache and dark hair dressed as a soldier and crying.
One night, Jason mentioned it to a member of staff at the theatre who immediately said, "that'll be William." The staff member went on to tell Jason about William Terrace, a famous ghost who is said to haunt the theatre.
William was a well known actor of his time. He was tall, dark and had a moustache. William was murdered at the stage door of that theatre in the 1890s on the opening night of his new play, in which he was playing the role of a Captain in the American Union Army.
The first two parts of the 'Uncanny' Summer Special are available now on BBC Sounds. You can subscribe now on BBC Sounds and future episodes will automatically drop into your feed.