This article is more than five years old and was last updated in August 2021. 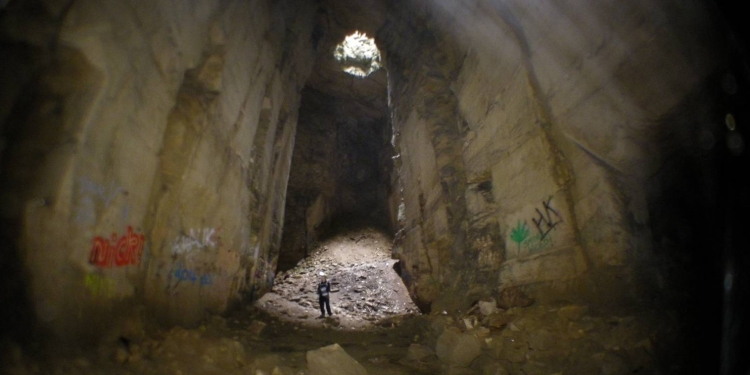 Photo: nettleden.com
Over the last few days, two groups of urban explores have become last in a vast network of tunnels under Box in Wiltshire. Having previously been interviewed by Radio 4 and Radio Wiltshire on the topic of underground exploration, the Beeb once again contacted me to give my opinion on the dangers of exploring Box Quarry.
I set up an underground exploration website, Nettleden.com over 15 years and as a result I'm regarded as a little bit of an expert on things of an underground nature, having previously been interviewed as part of a BBC Radio 4 programme, featured in The Guardian and The Times, and taken part in several local radio interviews.
Today, I told Ben Prater on BBC Radio Wiltshire's breakfast show what conditions are like in the abandoned stone quarry and how easy it is for the inexperienced to get lost in the maze of tunnels which were dug out over 150 years ago by quarrymen.

Listen To The Full Interview

The small town of Box is known for its quarrying history, stone had been quarried in the area since medieval times using open pits but the extent of the stone was unknown until Isambard Kingdom Brunel built his rail tunnel through the Box Hill. The tunnel was completed in 1841 but while his men blasted their way through the hill they became aware of the vast quantities of Bath Stone and after competition turned to stone mining.
Several stone firms were born in the area and extracted the stone, eventually they ran into each other underground resulting in a labyrinth of 15 mile network of tunnels, it is by far the biggest and most complex of all the Bath stone mines and is in fact the largest stone mine in the country.
The quarry was acquired by the War Department as part of the war effort, they made some minor modification but it was only used as an air inlet serving an adjoining mine, Tunnel Quarry. The mystery of Tunnel Quarry, which is still used by the Ministry Of Defence, is part of the reason why the tunnels are so popular with urban explorers and for decades people have been exploring and rediscovering the quarry.
Due to the vastness and complexity of the quarry, over the years people have got lost underground and needed rescue, in fact in 2016 a group of teens needed to be rescued after entering the quarry in search of Pokemon while playing the game, 'Pokemon Go'.
However, due to two incidents of lost cavers in the space of three days, local authorities are now looking to seal up entrances to the quarry. There are currently two accessible entrances to the quarry known as Jack's Entrance and Backdoor, both of which could now be gated as a safety measure.
Other local quarries, including Browns Folly have been gated in the past and all though explorers always find a way to bypass the gates, it does keep out children, casual and unprepared explorers.
My advice to anyone entering the quarry is to make sure you're with someone who is experienced in navigating the quarry, it's very easy to get lost and once you're inside, a part from a few landmarks and features, pretty much every passageway looks that same and it's very hard to get your bearings if you become lost.
Tags:
undergroundurbexwiltshireradio