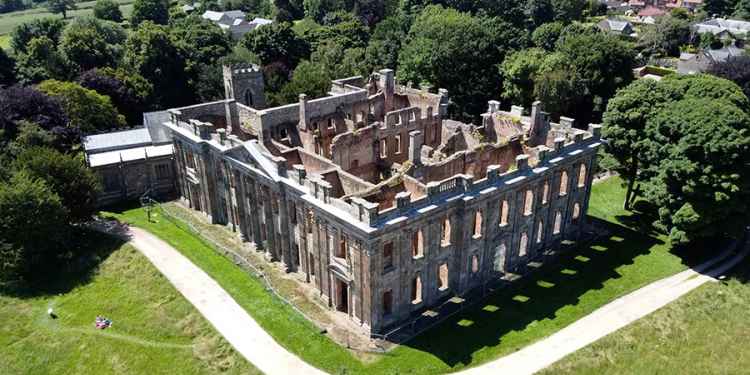 Now in ruins, Sutton Scarsdale Hall was once a grand Georgian home overlooking a valley through which the busy M1 motorway now runs. The Grade I listed stately home near Chesterfield was home to many families until falling into a state of disrepair. When the hall was put up for auction in 1919, the market for large homes was in decline and the hall did not sell. Instead the hall was bought by a group of local businessmen who stripped its valuable fixtures and fittings, and even the roof.
Sutton Scarsdale Hall is now looked after by English Heritage, but as of 2019 the structure has been unsafe for the public to enter.
The ruins have been a regular haunt for paranormal investigators, as the newspaper article from 1969 below shows. The hall is said to be haunted by one of its former residents, Nicholas Leke. Some think he has been seen wandering around the ruins and the neighbouring graveyard of St. Mary's church in the form of a dark shadowy figure. Others have reported orange and white balls of light floating in the sky around the hall.
The most paranormally active part of the property is the cellar where there have been countless reports of the sound of disembodied footsteps, screams and whispers. English Heritage staff working on renovating the building claim to have smelt the smell of tobacco in this part of the building several times.
Perhaps the creepiest phenomenon to be reported at Sutton Scarsdale is the sighting of a floating dismembered arm which beckons people down into the cellar, but why anyone would accept that invitation is beyond us.

Village Is Haunted By Ghost-Hunters

The peaceful nights of a village have been shattered. Weird flashes and yells come from the haunted ruin nearby, but it is not the ghost that is keeping the villagers wake - it's the ghost hunters.
They are driving to visit Scarsdale Sutton Hall in Derbyshire in the dead of night, hoping to see a phantom white monk who, according to local legend walks among the ruins.
Angry villagers say the hunters make a terrific din parking cars and setting up their equipment. Torches and cameras flash until the early hours
And yesterday villagers gave the ghost hunters a down-to-earth warning that they will call in the police unless the hunting stops.
Mr. Harold Taylor of The Homestead, Sutton, said: " Someone let it out that the white monk had been seen at the hall and now everyone has gone ghost-hunting mad."
"Carloads drive out from the towns. There are yells and flashes going on until 4am. A lot of the ghost hunters are middle-aged people who you would think had got more sense."
Mr Taylor, verger and caretaker at the village church, added "everyone in the village is getting sick and tired of these people. The only things they are likely to catch are a few bats."