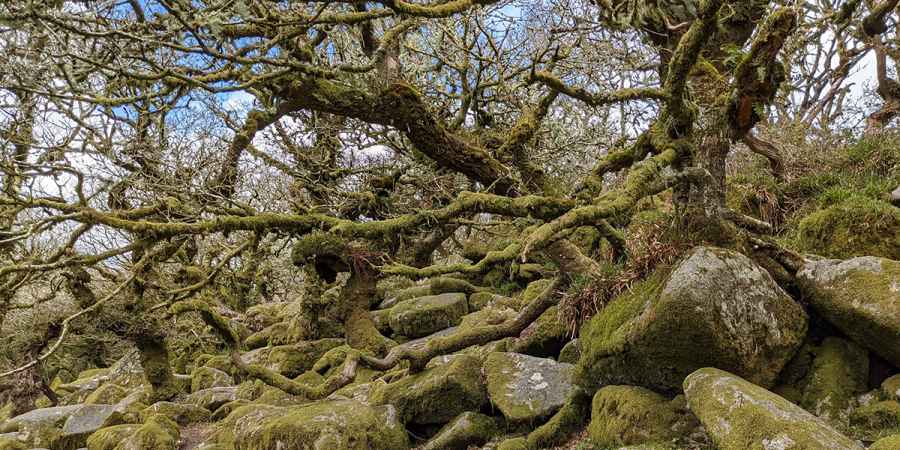 Home to a ghostly pooch, the Devil's pack of spectral hellhounds, and the scars of ancient druid rituals, this unearthly woodland in Devon has to be one of the most mysterious and magical places in Britain. This collection of trees is thought to be what remains of a much larger forest that would have once covered much of the moor, before early human settlements cleared it around 7,000 years ago.

What makes this ancient forest in Dartmoor National Park so unique is the shape and appearance of the trees. The branches are oddly twisted and contorted, stretching out and intertwining and twisting together like the crooked fingers of a witch.
The trunks and limbs are covered in moss, lichen and fern which gently flutter in the breeze giving the impression that the whole wood is alive. The spindly and gnarled trunks of the trees, some of which are as old as 500 years, zig-zag skywards from between a bed of granite boulders with a blanket covering of evergreen moss.
It's claimed that locals refuse to enter the woods at night due to its reputation of ghosts and hauntings. Wistman's Woods' most famous ghost is a phantom pooch known as Jumbo. It's said that he died while in the woods with his owner after being bitten by one of the many adders found there. Walkers have reported seeing the ghost of the small dog running around the boulders and his cries and whines have been heard echoing down the valley in the dead of night.
Another paranormal hotspot lies at the northern end of the woods where the tree line meets Lych Way. Today this is a popular hiking route, but historically it's been known as "way of the dead" or "corpse road", as it was once a major route for the transportation of the deceased for burial.
The ancient track linked the remote communities of Dartmoor to the small village of Lydford, situated about seven miles away. The village was once one of the most important towns in Devon, complete with cemeteries that had burial rights.
Locals and hikers say they've seen a ghostly procession of phantom monks in white robes walking slowly along the ancient pathway.
In case ghosts aren't enough, there's also the diabolical hellhounds to look out for. These supernatural wisht hounds are said to belong to the Devil himself. The woods are said to serve as the kennels for the pack of large red-eyed jet black dogs with huge fangs and a hunger for human flesh.
It's said that these terrifying beasts roam the moors at night with their master, especially on Sundays. Often they're said to be breathing fire or glowing, but they're always on the hunt for lost souls, unsuspecting travellers and unbaptised children.