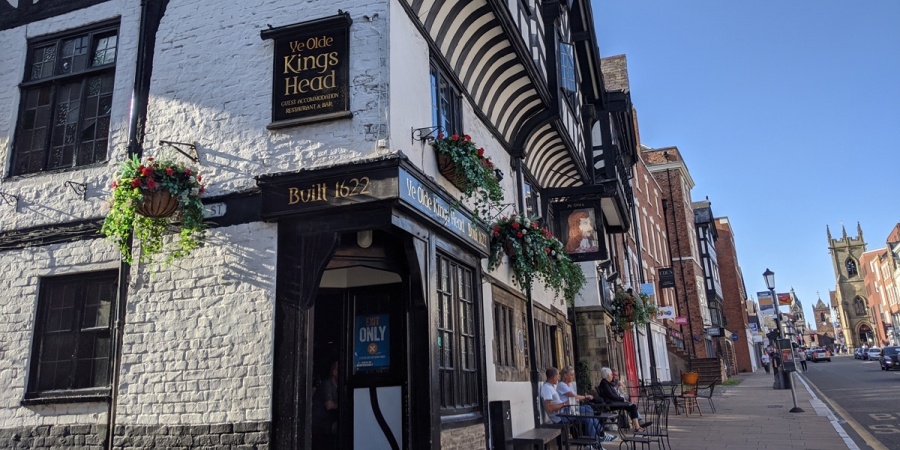 Ye Olde Kings Head was built on Chester's Lower Bridge Street in 1622 and named after King Charles I, it became an inn in 1717, and as with all pubs, many different characters have come and gone. Perhaps it's because of all this history that paranormal occurrences are reported here as often as once or twice a week. The building has been investigated by some of the UK's best-known paranormal teams and television shows, including Yvette Fielding and the 'Most Haunted' team and 'The Haunted Hunts'.
There are allegedly 13 different ghosts that haunt the pub, from the ghost of a lost little boy to a dark entity that roams the whole building. Is this the dark figure was caught on camera? The most active part of the inn is the bedrooms, where guests have reported their covers being removed, to being shaken awake at night. Others claim to have heard loud knocks on their doors, and unexplained bangs from in and around their rooms.
There's said to be a ghostly dog that stalks the guest rooms and a floating corpse that appears over the bed in room three. In room four, a woman is said to appear in the window. The story goes that two men took a liking to her and engaged in a duel to win her love, but they both died in the fight. The two men are also said to appear in spirit form in this room.
Apparitions are seen aimlessly wandering the stairs and corridors, including the ghost of a tall well-built man who has an unpleasant demeanour. Others activity includes disembodied voices, the sound of children laughing and playing in the dead of night, and poltergeists pranking the unsuspecting.