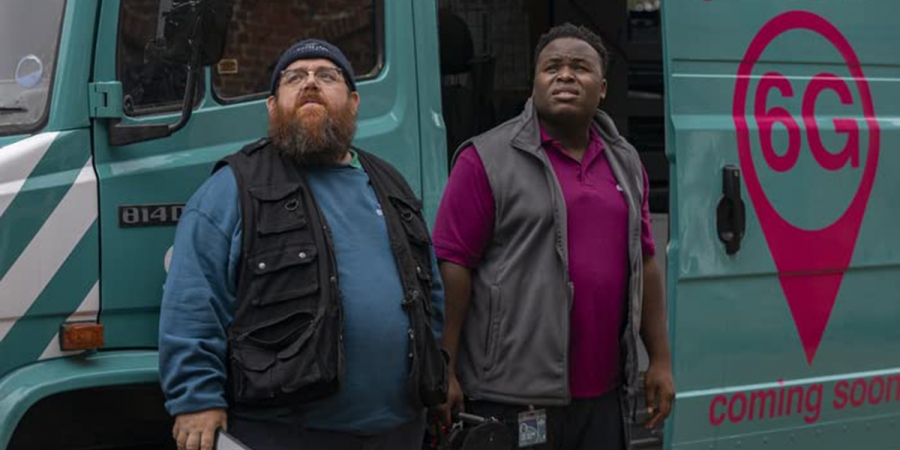 Despite having pretty solid reviews and still being listed amongst the 1,000 most popular television shows on IMDb months later, Amazon Prime have cancelled Nick Frost and Simon Pegg's supernatural comedy series 'Truth Seekers' as it's confirmed that a second series will not happen.
The eight-part ghost hunting themed show dropped on Prime last Halloween and starred Nick and Samson Kayo taking on the rolls of their paranormal alter-egos, Gus and Elton, two broadband installers turned part-time paranormal investigators who aim to uncover and film paranormal sightings across the UK, at locations they're sent to by their boss Dave, played by Pegg, at the telecommunications company, Smile.
The show was a big hit in the paranormal community and for the wider fan base of British comedy, but it seems the series didn't perform to Amazon's expectations leading to the show being axed after just one series.
Nick described the news as a "massive kick in the willy". Speaking in a now-deleted Instagram video, the comedian said, "get ready to be rocked with some bad news and that news is this... Sadly, 'Truth Seekers' will not be returning for a second season."
Nick continued, "'Truth Seekers' has not been renewed, which is a massive kick in the willy for me. We really put our all into this, our heart and soul and blood in some cases, so to not come back is really sad for us and it's a shame."
'Truth Seekers' was well made, funny, exciting and showed a real knowledge and passion for the paranormal. It was refreshing to see some British made paranormal entertainment that was lighthearted and different to the normal ghost hunting shows on television which all rely on the same format.
What's more, the series was built on the success of the Three Flavours Cornetto trilogy, reuniting Nick and Simon on screen - the creators and stars of the iconic British comedy movies, 'Shaun Of The Dead', 'Hot Fuzz' and 'The World's End'. There really is no reason why this show should have failed, it had everything in its favour.
The series had an old school horror feel about it and touched on some popular and fascinating aspects of the unexplained, including the odd phenomenon of numbers stations, wartime ghosts, the beast of Bodmin moor, and of course the rise in popularity of ghost hunting on live streaming platforms such as YouTube.
Simon and Nick are no strangers to the world of the paranormal and the weird. In 'Shaun Of The Dead' the duo battled the living dead, they befriended an extraterrestrial in their 2011 movie, 'Paul', and their 2007 comedy 'Hot Fuzz' has many references to strange and quirky occult practices.
The cast of 'Truth Seekers' also includes Malcolm McDowell, plus Emma D'Arcy playing Astrid who comes to the gang looking for help with a haunting but is hiding a secret. There's also Susan Wokoma who plays Helen - the highly-strung agoraphobic sister of Elton, and the brilliant comic actor, Kevin Eldon.
The series ended on a curious cliffhanger. In the series finale we see Astrid cross over to the other side, but in the episode's final scene we realise that she might not be gone for good. Plus there's the issue of Simon's character, Dave. It's hinted in the final moments of the episode that he might not be human.
Clearly Nick and Simon had more ideas for the series. In Nick's Instagram video he said, "I think we had lots of lovely ghost stories to tell. Stories that will remain now untold. If you liked the show, thank you. And if you didn't, are you happy now? Happy now?"
Fans of the show have started a petition to get Amazon to revive the show. You can show your support and sign the petition at change.org.
Add A Comment
Tags:
comedyparanormaltelevisiontopicalamazon prime