Tonight is the second episode of Derren Brown's new series Derren Brown Investigates. Tonight Derren will meet Ukrainian Vyacheslav Bronnikov, a man who claims to be able to teach people new human abilities and find out about internal vision, teaching the blind to see. 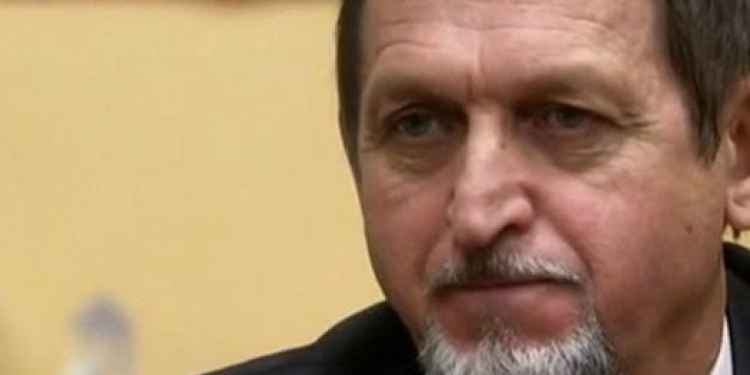 What Is The Bronnikov Method?

Vyacheslav Bronnikov founded an International Academy of Human Development where he teaches unique human development techniques which are claimed to activate an internal bio-computer, it is based on Taoism philosophy and offers a series of exercises adapted for contemporary lifestyle.
"The Bronnikov Method" is very cult like, Bronnikov received the information he needed to teach these skills from Tibetan monks while asleep. There's many training books which Bronnikov sells, training academies in the Ukraine and US and ideally needs you to devote 20-30 years of your life to learning and of course, these courses aren't cheap at around $10,000 for a three week course.
Bronnikov's academy claims to teach people how to develop photographic memory, the ability not to get ill and the skill Derren will be looking in to, external vision. The claim is that Bronnikov can help the blind to see again or for the first time. For sighted people, he blindfolds them and teaches them to read through a blindfold and then sync up that internal vision with normal vision so you can benefit from both.
The training comes in three stages, the first two stages are expensive but well practiced whereas the third stage is some what mythical, only a few people are known to have taken stage 3.

Learn to play and work with your own body energy and increase your vital force that enables you to be continuously active without getting tired. Work with the Earth and sky essences and the essences of the four animals.

Learn to work with your psycho bio-computer and acquire photographic memory and internal vision is activated and developed. Learn to developed your bio-computer to replace tools such as watches, calculators, compass, binoculars and microscopes.

You'll not only see internally but you'll be able to taste, smell, hear and feel too. Learn to remote view, heal yourself and others and learn to see the inner-workings of the human body in order to perform medical diagnostics.
Most of the people who have learned to see despite blindness were taught before the age of 12, at this stage in life Bronnikov claims the method is 100% effective. The success stories say how great it is as they can now find things around the home and cook again, I've met many blind people who can do the same and they haven't needed the Bronnikov Method.
I think the most likely explanation is that these training session are teaching the blind to use their imaginations in a visual way, perhaps think visually which wouldn't be the natural way to think for them. It would be like me speaking with a German internal dialogue.
ESO TV visited Moscow last year where they tested Bronnikov's son, Vladimir. The TV network were looking forward to finding out more about what claimed to be an exciting technique but came home feeling cheated and disappointed.
It seems that all the demonstrations of internal vision that ESO were whiteness to were no more than cheap tricks, they claim to have captured on video the obvious head movements which clearly show that the Vladimir is just peaking through a gap at the side of his blindfold.

Derren traveled to Holland with Judy, a blind British woman to investigate the claims that the Ukrainian Bronnikov family are able to give people the ability to see, even those with no eye balls.
Derren met Vyacheslav and his son Vladimir at their first European training school, where they took part in a four day course with the aim of giving Judy her sight back.
Vladimir describes the course as being a bit like the Matrix movies, he likened the abilities to those of Neo having being freed from a restrictive world. By activating your psycho bio-computer you can achieve a whole list of skills, one of which is seeing the physical world on an internal screen in your mind.
The Matrix had a great plot, the Bronnikov Method is a bit more sketchy, especially when they revealed how this bio-computer is powered... the power comes from your balls! Something one of my Twitter followers described as "arse gravy" - I agree.
They claim the human genitourinary system is a source of energy within our bodies and that can be channeled a focussed and that's the power source which runs these internal computers. 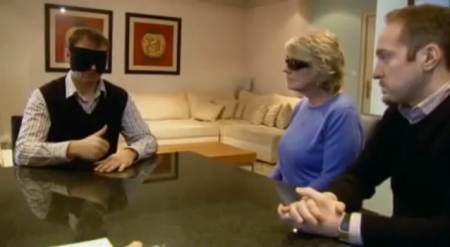 Most of the course seemed to just deal with this new found "penis energy", how to feel it, handle it and pass it around the room to others. At one point in the course, Vyacheslav told a 16 year old boy who is likely to be in a wheel chair for life that if he's not lazy and exercises regularly he will be able to walk - sick!
The only time they really talked about internal vision was when they asked students to visualise a scene on their internal screen and then zoom in on it using binoculars - I'm not sure that is a very specialist skill, it just sounds like they are asking them to use their imaginations, forget any bio-computers or magical screens. Also, I wonder how someone who is born with no sight could have participated as they would have no visual memory and no way of visualising a boat on an ocean as instructed.
I don't know why these people open themselves up to this, just like the British psychic Joe Power on last week's show, there is overwhelming evidence that none of this is real. The method has failed to deliver any measurable success time and time again and the Bronnikovs fail to provide any evidence - even the name of a blind boy with no eye balls who could seem again escaped Bronnikov's memory, you'd think he would at least know his name.
Again, just like Joe, when the Bronnikov was challenged or asked to prove these abilities he can't. He is unable or unwilling to demonstrate the psycho bio-computer under controlled conditions and just like Joe, Bronnikov turned the tables on Derren and criticised his approach.
Of course, Judy gained seemingly nothing from the experience. She failed to feel any of the body energies and her vision wasn't improved in anyway, internally or externally.
So may be it's time to start up the Unholy Existence hall of shame and add Bronnikov alongside Joe Power as a paranormal sham.
The Bronnikovs dream of "a world without blindness", sadly that is not going to happen any time soon and certainly not with any help from the Bronnikovs Method.
Add A Comment
Tags:
paranormalderren browntelevision