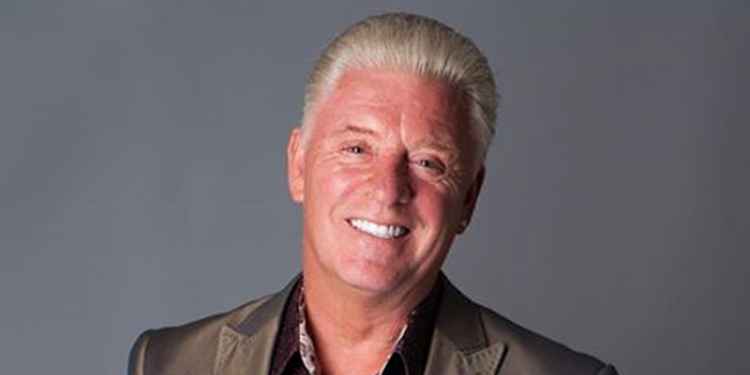 The nation's favourite psychic medium, Derek Acorah, has passed away aged 69 after a short illness, and the paranormal world have been sharing their memories of the star.
Derek was best known as the resident spiritual medium on the British ghost hunting show, 'Most Haunted', appearing in a total of 93 episodes of the show between 2001 and 2005. Working along side his spirit guide Sam.
Derek's wife, Gwen announced the news of her husband's passing in a Facebook post on the medium's official Facebook page. She wrote, "I'm devastated to announce that my beloved husband Derek has passed away after a very brief illness."

After his controversial exit from 'Most Haunted', Derek starred in his own short-lived show 'Derek Acorah's Ghost Towns' and has since made appearances on a whole host of shows including 'Doctor Who', 'Celebrity Juice' and 'Harry Hill's TV Burp'.
In 2017, Derek was a contestant in the 20th series of 'Celebrity Big Brother', along with 15 other celebrities who all lived together in the famous house at Elstree Studios - a location Derek had previously investigated due to its haunted reputation. Derek eventually finished fourth in the series.
Derek was no stranger to reality TV, in 2010, he appeared on 'Celebrity Quitters' with Richard and Judy’s daughter Chloe Madeley, and Paul Danan 'Hollyoaks' star, who also joined Derek in the Big Brother house.
Although he TV work diminished a little in recent years, Derek still maintained a huge fan base and just last year embarked on his 'The Eternal Life Tour'. In 2019 he picked up the silver award for Best Medium in the Paranormal Entertainment Awards.
Haunted Magazine have announced that an upcoming issue of the mag will be dedicated to Derek, with a portion of each sale going to Derek and Gwen's favourite charity, Pathfinder Dogs.
A fitting tribute, as according to the magazine's editor Paul Stevenson, Derek featured in the very first issue in 2009, which was simply titled "a tribute to the legend that be..."
'Most Haunted' host, Derek's former co-star Yvette Fielding, tweeted "our condolences go out to Derek's family at this time."
Derek's friend, Richard Felix - another fellow 'Most Haunted' cast member, shared his shock on Derby Gaol's official Facebook page, saying "everyone here at Derby Gaol wish to send their thoughts and condolences to Derek’s loving wife, Gwen, and to all of his family, friends and fans."
Phil Whyman, who worked with Derek in the early days of 'Most Haunted' tweeted, "I'm in total shock at the moment. I have so many great memories of working with him." Phil's wife, Sara, was equally sadden by the devastating news, taking to Twitter to say "a legend has left us."

Today I awoke to the news that my old pal Derek has passed away. I'm in total shock at the moment. I have so many great memories of working with him. Love and thoughts go to Gwen, family and friends. RIP Derek Acorah x❤️😢 pic.twitter.com/jMhNurEbZZ

Such devastating news this morning. My heart goes out to Gwen and Dereks family. A legend has left us 💜 Thank you @derek_acorah & @httpGwenAcorah for the support you gave us. RIP Derek 💜 pic.twitter.com/ax7b3j4PdL

'Help! My House Is Haunted' investigator, Jayne Harris, wrote "mediumship will always be controversial but whatever your thoughts on that Derek Acorah was a gentleman and an instantly recognisable, well loved character in the."
Her co-star, Barri Ghai, added "despite some people's views on him and the entertainment show he was most associated with during his career, he was very much loved by many and played an important role in our paranormal popular culture. Thoughts go out to Gwen and his family and friends."

So saddened and shocked 😔
Derek was a real character and will be missed ❤
R.I.P Derek. https://t.co/gjPv7Hqmoo

Just woke to the see this sad news. He was a very entertaining actor who will be remembered for his most famous line #marylovesdick RIP now Derek. Fingers crossed #sam is waiting at the bridge. 🙏 https://t.co/Vc6wtHMocF

Tributes continue to flood in from former colleagues, friends, and fans of the television medium. So many in fact that the star's name was the biggest trending topic on Twitter in the UK within minutes of the news breaking on Saturday morning.

‘Farewell my love! I will miss you forever! I’m devastated to announce that my beloved husband Derek has passed away after a very brief illness'. RIP Derek ✨https://t.co/tyDcf0dZG6

I grew up with Derek on the telly and if it wasn't for the entertainment of Most Haunted keeping my paranormal interests going as a teen then I probably wouldn't be here now doing it for real. Sad loss of a lovable TV personality. RIP Derek. You will be missed. pic.twitter.com/XQOiASBRKs

It Saddens me to hear of the loss of a dear friend and a psychic who helped me in many ways, a true gifted medium who will be sadly missed RIP and have a great show with Colin. pic.twitter.com/IDAaEXsuc3

A TRUE GENTLEMAN
So sad to hear that Derek Acorah has passed.
Many of us started watching him on our TV's all those years ago, captivating us and opening the spirit world to all.
It's times like this where perspective comes into play, truly awful news.
Thank you and RIP Sir!
❤️ pic.twitter.com/VsVXKLhTBQ

Rest in peace Mr. Acorah. For all the piss taking and jibes over the years it’s impossible not to feel sadness and affection. Much love, Dodds

Being an ex most haunted team member.. my thoughts are with derek and family, I am shocked at his death and wish his family’s peace at this time #DerekAcorah