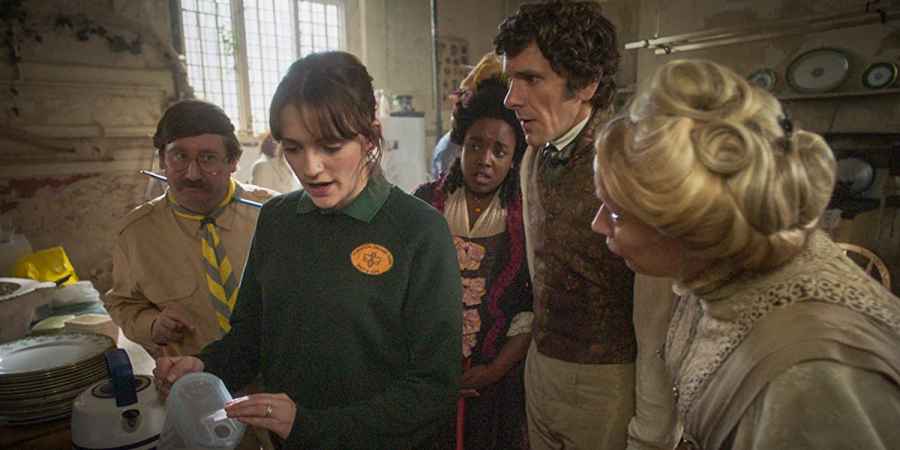 The ghostly residents of Button House make a spirited return to BBC One this evening at 8:50pm in the critically acclaimed and much-loved supernatural sitcom.
From the creators and stars of 'Yonderland' and 'Bill', and the original stars of 'Horrible Histories', the popular comedy will start filming the new series in the new year and it will once again be broadcast on BBC One and BBC iPlayer.
When we return for series four, Button House is open for business, well, the gatehouse is. Can Alison (Charlotte Ritchie) and Mike (Kiell Smith-Bynoe) make a success of the humble B&B or will the interfering ghosts once again scupper their plans?
You can watch the trailer for the show's fourth series below...
The third series of the BAFTA nominated series launched in summer 2021 with 4.3 million viewers watching the first episode - the biggest audience of the regular series to date - and the biggest audience for a comedy among 4 to 15-year-olds in 2021 so far, thus cementing the show as a firm family favourite.
'Ghosts' stars writers and creators Mathew Baynton, Simon Farnaby, Martha Howe-Douglas, Jim Howick, Laurence Rickard and Ben Willbond. The cast also includes Lolly Adefope and Katy Wix.
The creators say, "we are thrilled to be returning to Button House for a fourth series. We are already working on new stories and can't wait to share the next chapter."
Alison Carpenter, Executive Producer at Monumental Television says, "it's wonderful to see audiences enjoying 'Ghosts' more with every series. We can't wait to get back to Button House with our incredibly talented team of writers, cast and crew to bring a fourth series to the screen."
Jon Petrie, Director of Comedy at the BBC says, "we can't wait to return to Button House for series four. 'Ghosts' is a true jewel in BBC Comedy's crown, and we’re delighted to be working again with the cast and creators, and Monumental, who never fail to deliver a faultless combination of big laughs and loads of heart."
The new six-part series from Monumental Television in association with Them There for the BBC follows the comedies successful Christmas special.
The Christmas episode, which was shot during the making of the third series, saw Kitty becomes convinced that Santa had made an early stop at Button House when a man is discovered sleeping in a tent on the grounds.
The 'Ghosts' Christmas special, which aired on BBC One in December and is available to stream on demand on BBC iPlayer now, where you'll also find all previous episodes of 'Ghosts'.
Tags:
comedyparanormaltelevisionbbc