Inside The Haunted Antiques Paranormal Research Centre In Hinckley 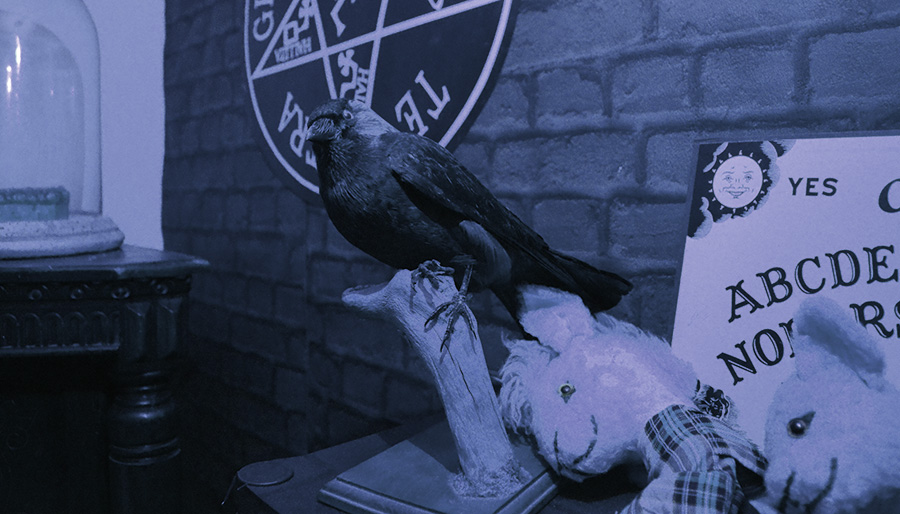 What do you do on a dull grey Saturday afternoon? While most might head to a shopping centre or the cinema to avoid the rain, I did something a little different and visited a paranormal research centre in Leicestershire, which is packed full of antique haunted items.
I wasn't sure what to expect, a haunted museum conjures up images of a dark, gloomy chamber full of creepy dolls and antique boxes that allegedly house demonic entities. You can't help but thinking that it's all a bit gimmicky, and while there are a few creepy dolls, there is nothing gimmicky about the Haunted Antiques Paranormal Research Centre in Hinckley.
Neil, the fascinating guy who runs the centre has no agenda to push, he's not trying to convince anyone that the eclectic collection of artefacts in his quaint museum are haunted, in fact he's not even bold enough to make the claim that any of the items are definitely haunted. Instead leaving it to visitors to make their own mind up, which gives both Neil and his collection much more credibility.
Other haunted museums tend to rely on fear mongering and showmanship to bring in the crowds, but you won't find labels on any of Neil's collection which state that an item is cursed or warning guests "do not touch". In fact, if you wanted to get hands on with a dybbuk box, you can. Nothing in the centre is behind glass, in cabinets or behind rope barriers and visitors are encouraged to touch and interact with the items, allowing them to decide for themselves if the object is carrying any spiritual energy. You can even touch a real human skull should you want to.
Surprisingly, you're even able to remove items from their shelf and take them in to a small isolation room. This completely dark room is big enough for one or two people to sit in and focus on the object they've taken in with them, while surrounded by mirrors.
The centre opened in February 2018 on Regent Street, one of the oldest roads in Hinckley, which means that the centre sits on land with as much history as some of the items on display. This has lead many visitors to the conclusion that the building itself is a paranormal hotspot. 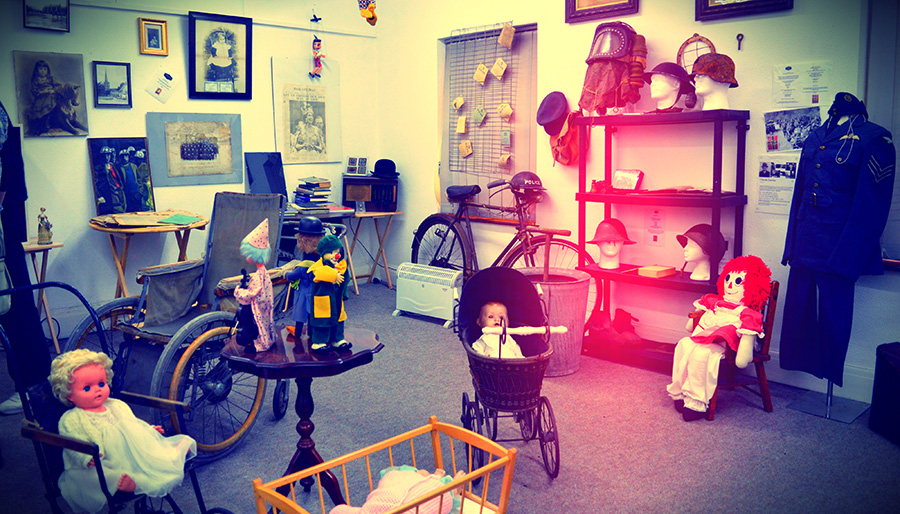 The collection is displayed across three main rooms, most of the objects come from Sims Vintage Antiques Centre near Stratford-upon-Avon, a supporter of the museum. Every item has some kind of meaningful attachment, it's either a sentimental keepsake, a once-loved toy or a personal object of some kind.
There are hundreds of items on display, everything from a copy of the famous 'Crying Boy' painting and old framed family photographs, to genuine death masks - from the macabre practice of making likenesses of someone's face following their death. One of the wax casts in Neil's collection even has the deceased's real eyelashes embedded in it.
The macabre theme continues with a genuine Victorian era book of the dead, as well as several eerie framed photographs of the dead.
A section dedicated to war includes artefacts from the First and Second World Wars, including a WWII gas mask, soldiers' helmets and a very personal photo album which visually documents one German soldier's experiences during the war. The album must have held a great deal of sentimental value to the soldier as it is full of his personal memories and the photographs have captured some very emotive moments of the war.
Amongst the war memorabilia is Neil's oldest item, musket shot from the English Civil War, as well as possibly the most controversial item in the museum, an inscribed copy of Adolf Hitler's 1952 autobiography, 'Mein Kampf'.
Also sat on one of the shelves in the main room is an innocuous looking jar with a small amount of soil in it. The soil is apparently taken from the site where American actress Sharon Tate was killed as part of a string of mass murders conducted by members of the notorious Manson Family in 1969.
One of the most prominent items in the collection is an eerie haunted wartime wheelchair, which featured on ITV's 'This Morning' last year. The show's presenter, Philip Schofield, was brave enough to sit in the chair, which is said to be haunted by the ghost of hundreds of wounded servicemen.

Neil then lead us to a small door, which is covered in writing. These are signatures of some of the paranormal teams who have visited the centre, including Barri Ghai who's perhaps best known for his appearance in the 2018 ghost hunting show, 'Help! My House Is Haunted'.
Passing through the door, we found ourselves in a smaller and darker room, known as "the witch's room". This part of the museum houses anything with any remotely negative or evil story attached to it.
Large hexagrams adorn the wall as a nod to the infamous occult author, Alistair Crowley and below them is a the plaster-cast face of musician David Bowie, who was a follower of Crowley's work and apparently dabbled in dark magic.
This room, which I found the most interesting of the three, is home to many sinister items, including a dybbuk box, which is said to have a negative entity trapped inside of it.
The witch's room also has several Satanic books and occult items, including a really interesting example of an exorcism kit, which includes everything a Catholic priest would need to banish a demon from someone who's possessed. Another really interesting item which caught my eye in this room was a divination tea cup, used in tea leaf readings.

We then walked through into the third room, the séance room. A very cozy and welcoming room, which was originally set up to resemble a Victorian parlour. The centrepiece is a large table draped in a black velvet cloth, where visitors can conduct séances.
The room also has several potentially haunted artefacts on display, including two real human skulls and a large mirror that's reminiscent of the Mirror of Erised from the Harry Potter movies. The large cracked mirror in its weathered wooden frame came from a house clearance. Neil was told by a medium that the mirror was acting as a portal and allowing something negative to come through into the house. Could it now be giving dark entities a doorway into the museum? 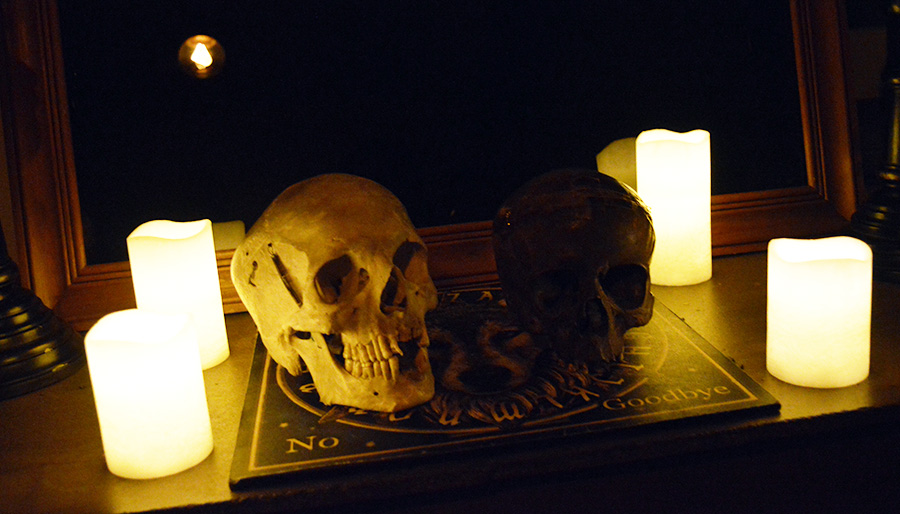 The nice thing about the centre is that Neil is very passionate about all of the items and seems to love showing people around. He and his team are very friendly and very welcoming, which makes visiting the Haunted Antiques Paranormal Research Centre a lovely experience.
The centre is well worth a visit and can be found in Regent Court next door to The Baron of Hinckley pub on Regent Street in Hinckley. There's a small tea room in the museum, where you can sit and have a drink and chat about the paranormal, or perhaps pick up one of the books on the topic from Neil's collection for a read.
The centre is open to the public on Saturdays from 10am until 4pm and entry is free of charge. The venue can also be hired out for ghost hunts and private paranormal research every Saturday night, allowing paranormal teams to get up close and personal with the items and conduct any paranormal experiments they want, the likes of which couldn't be carried out at regular haunted locations.
The centre is funded through membership, which gives users access to a 24/7 live CCTV feed of the museum as well as loads of other benefits for a small annual fee.
You can find more details at hauntedresearchcentre.com or on HAPRC's official Facebook page.
Tags:
paranormalleicestershirehaunted antiques paranormal research centre