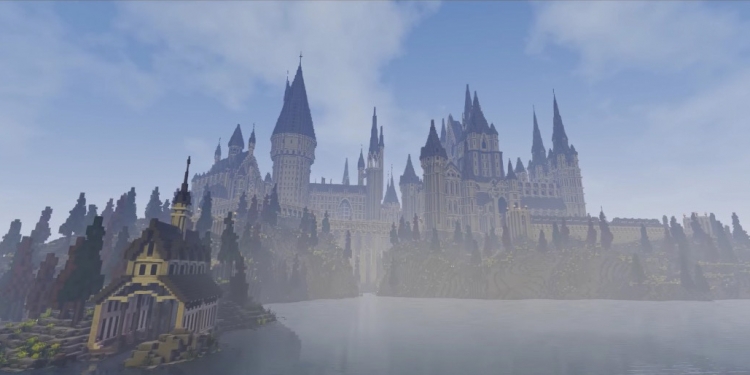 A team of Harry Potter fans have spent more than two years recreating some of the most famous locations from the Harry Potter series inside Minecraft and now their amazing map is finished, you can explore it for yourself.
You can see a preview of the amazing Minecraft world in the video below...
The Floo Network built some of the most iconic locations from the movies block by block, including the imposing castle, home of the Hogwarts School Of Witchcraft And Wizardry. You can explore all of the secrets of the castle, including the great hall complete with floating candles, the grand staircase, Dumbledore's office and the room of requirement. There's also plenty of classrooms to look around including potions, defence against the dark arts and charms class.
The detail of this map is incredible, I spent hours looking around the various location from the Harry Potter movies. You can explore the world using apparition, as well as the floo network, through the grand fireplaces at the Ministry of Magic. You should also look out for a piece of parchment hidden in Filch's office, the marauders map. It will help you find the many secret tunnels in the castle.
This unbelievably giant map gives you the chance to visit the common rooms of all of the Hogwarts houses, Gryffindor, Slytherin, Hufflepuff and Ravenclaw.

Out in the castle's grounds you can call in on Hagrid in his hut and take a stroll through the Forbidden Forest. You'll also find the huge quidditch pitch, the iconic rickety wooden bridge, the boat house where Snape met his untimely end, the owlery, Professor Sprout's green houses and the ancient whomping willow tree, complete with a secret tunnel hidden in its roots which takes you straight to the shrieking shack.

If you're feeling brave you can head to Moaning Myrtle's bathroom and open the Chamber of Secrets or tack down the Mirror of Erised where Harry first encountered Voldemort.
Away from the school grounds you can explore Hogsmeade including the station where the Hogwarts Express drops off students to the school and Honeydukes where a secret tunnel leads you back to Hogwarts. There's also an impressive recreation of Privet Drive where Harry spent his early years with Uncle Vernon and Aunt Petunia, and the snowy village of Godric's Hollow where Harry's parents were murder by he who shall not be named.

You can also explore some of the muggle world in this map, several real-world location that appear in the movie have been included in the map. Opposite Westminster and the tower of Big Ben on the River Thames, you'll find the iconic London Eye outside City Hall.

The muggle world also includes a very impressive block-built replica of King's Cross station where you can find the wall between platforms 9 and 10 which will allow you to pass through to the legendary platform 9¾ where you'll find the bright red Hogwarts Express ready to take you to the castle.

Further into the city of London, you'll find the discreet entrance to every wizard's favourite pub, The Leaky Cauldron. You can walk through the pub to the ordinary red brick wall behind the building and experience the magic as the wall opens up to reveal Diagon Alley.
You can browse many of the shops on Diagon Alley and if you're feeling brave you can turn off on to Knockturn Alley and visit the sinister Borgin and Burkes.
At the end of Diagon Alley is the huge Gringotts Wizarding Bank where you can descend into the cavernous vaults below on a subterranean roller coaster ride.

You can also take a trip to The Burrow, home of wizarding family the Weasleys and should you wish, you can even call in on the Malfoys in their dark manor house.
The builders of the map hope to expand it in the future to include more locations such as Azkaban Prison and more of the Ministry of Magic.

The map can be downloaded for free but the team behind it have spent countless hours putting together this amazing reconstruction of the Harry Potter universe and are therefore asking for a small donation.
Personally I think a the donation is more than worth it in return for the level of detail and the sheer size of this map. It's a must for any Harry Potter who also loves Minecraft.
The world the Floo Network have created is stunning, full of secrets, familiar locations and clever building which makes this map a fun and interactive map to explore.
» Download the map here.
Tags:
harry potterminecraft

All The Beasts From 'Fantastic Beasts: The Crimes Of Grindelwald'

Spawn A Minecraft Zombie In Real Life With A Potion