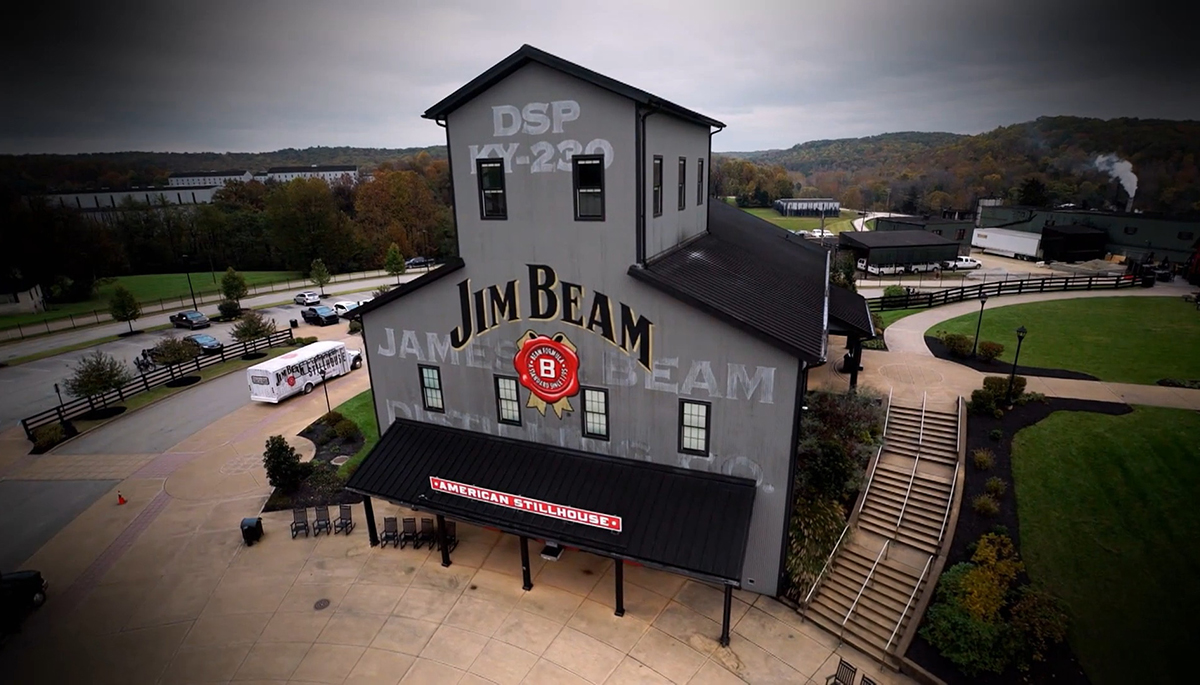 Having recently repeated the entire first two seasons of 'Paranormal Lockdown', the Really channel are now giving viewers another chance to watch Nick Groff and Katrina Weidman in the third season.
In episode six Nick and Katrina become the first investigators to get access to the historic Jim Beam distillery in Kentucky, where they hope to get to the bottom of employees' claims that the warehouses are haunted.
The distillery in Claremont is home to one of the world's most renowned bourbon brands. It was built by James Beam in 1933, the distillery spans over 500 acres of bluegrass hills and combined the 32 warehouses contain over half a million barrels of bourbon, but many that visit the historic site say they've experience a different kind of spirit here.
As always the duo will spend 72 hours on the vast site. Although unlike normal they're not really locked down at the location because obviously Jim Beam is a huge alcohol brand and they can't afford to shut down production. But Katrina says, "this type of experiment where we are actually sharing the space with the employees might actually raise the activity for us because this was always an active place." She adds, "so having the people going through the daily motions of working here might actually help our investigation by raising energy."
Nick said, "I've been wanting to come here for years, I'm so excited." He added, "I can't believe we've got access." Katrina added, "this is one of the biggest locations we've ever investigated, so we have a lot of ground to cover." So, they decide to focus on the spots where paranormal experiences have been previously reported. 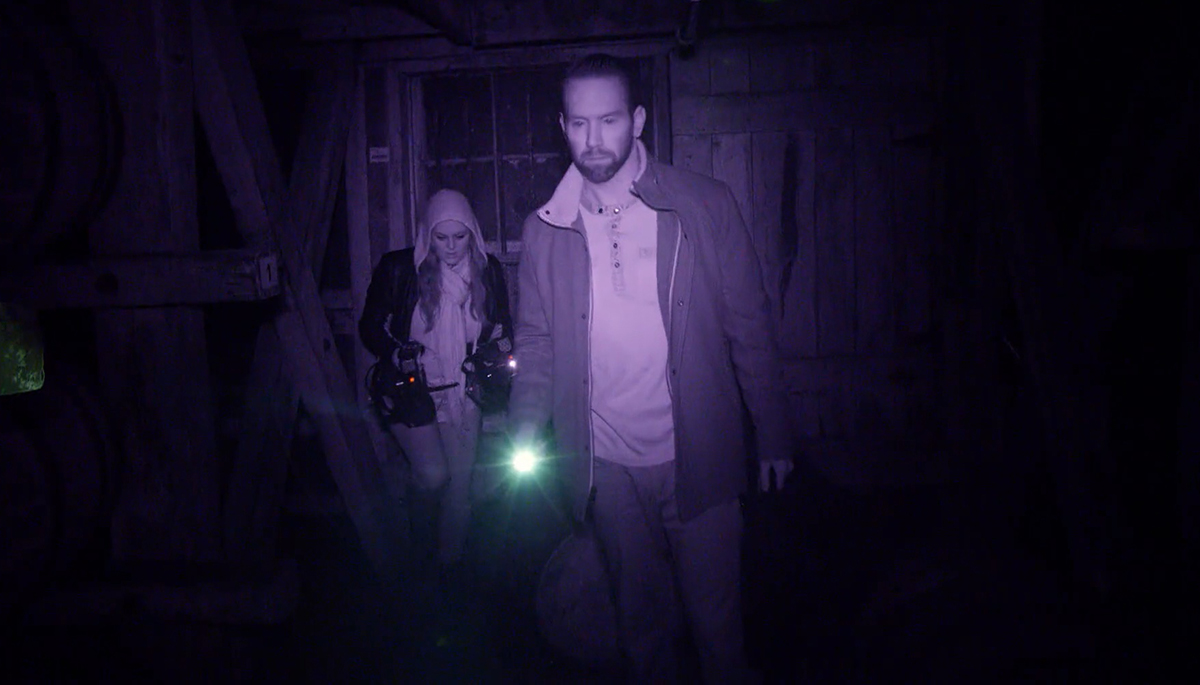 They begin in warehouse D, where employees have reported seeing a figure walk up the stairs, heard unexplained disembodied footsteps and whistling on the floors above them, and a man in overalls has been seen hiding between the barrels. Early on in the investigation, Katrina thought she saw some kind of shape forming in the darkness, and they heard strange creaking and banging sounds.
It seemed like the activity at the warehouse was beginning, but with such a vast site to investigate, the pair moved on to warehouse K. This building has been described as the most terrifying by staff. Here, an apparition of a woman wearing formal clothes has been seen floating on the upper floors. Could she be the spirit who died in a fire which was said to have destroyed a house which once stood on the site of the warehouse?
They started on the second floor where the female figure had been seen. Nick started using a device called an EchoVox, which has a built in microphone creating an eerie audio loop of echos and indistinct sounds. It's believed that spirits can manipulate these sounds to form intelligent responses. During the audio experiment Katrina reported feeling sick and moments later they ran off into the darkness after Nick thought he saw something. This was followed by a clear sound of movement coming from the back of the warehouse.
With that their first day of investigation came to an end. Both Nick and Katrina decided to sleep in warehouse K, both setting up their beds in different areas of the huge barrel-filled building. 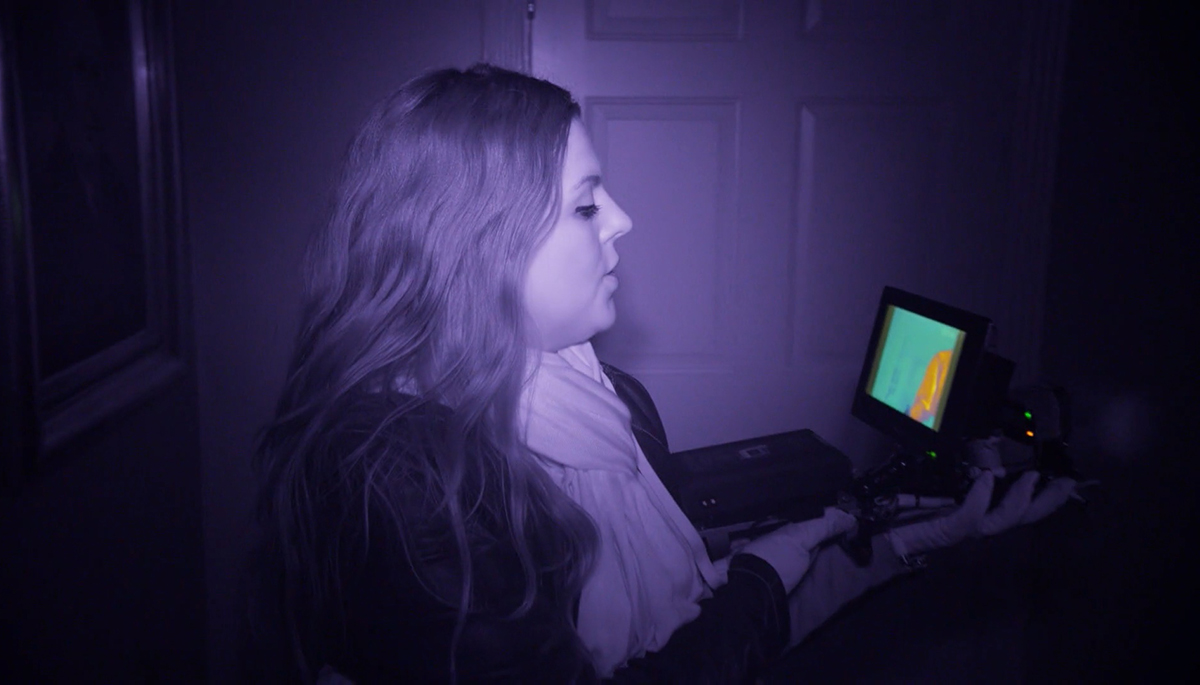 On day two they resume their investigation in warehouse K where Katrina explains their objective. She said, "we know things happen here in the day, but we need to try to figure out is it always here during the day, if so where does it focus on." Katrina thinks that an audio experiment is the best way to uncover this information.
Using the EchoVox they begin calling out to the spirits of the warehouse. Before anything meaningful came through the gadget, the investigators were distracted when they saw and heard something being thrown. Moments later Nick thought he saw something moving behind camera man Rob Saffi.
Although Katrina didn't achieve her objective, Nick said, "here in warehouse K it feels like there is a presence that is very intelligent that wants to be heard, that wants to seen." It's not clear what he is basing this on, but he says that "it wants to reach out and communicate."
That night Nick and Katrina move on to another of the distillery's paranormal hotspots. In the centre of the site is the T Jeremiah Beam House. It was built in the early 1900s and became home to master distillers and their families for decades. Today it's used mostly for business meetings, but the home's past occupants may still linger here. Many visitors report seeing a phantom woman walking the upstairs and seen peering from a window.
Katrina starts out by using a thermal camera, which she hopes might show up apparitions due to any potential temperature differential. In one of the meeting rooms Nick has a clever experiment set up which revolves around four shot glasses. If anything gets near or touches one of the glasses, the decanter in the middle of the setup lights up a different colour. Sadly, the experiment didn't attract any spirits. 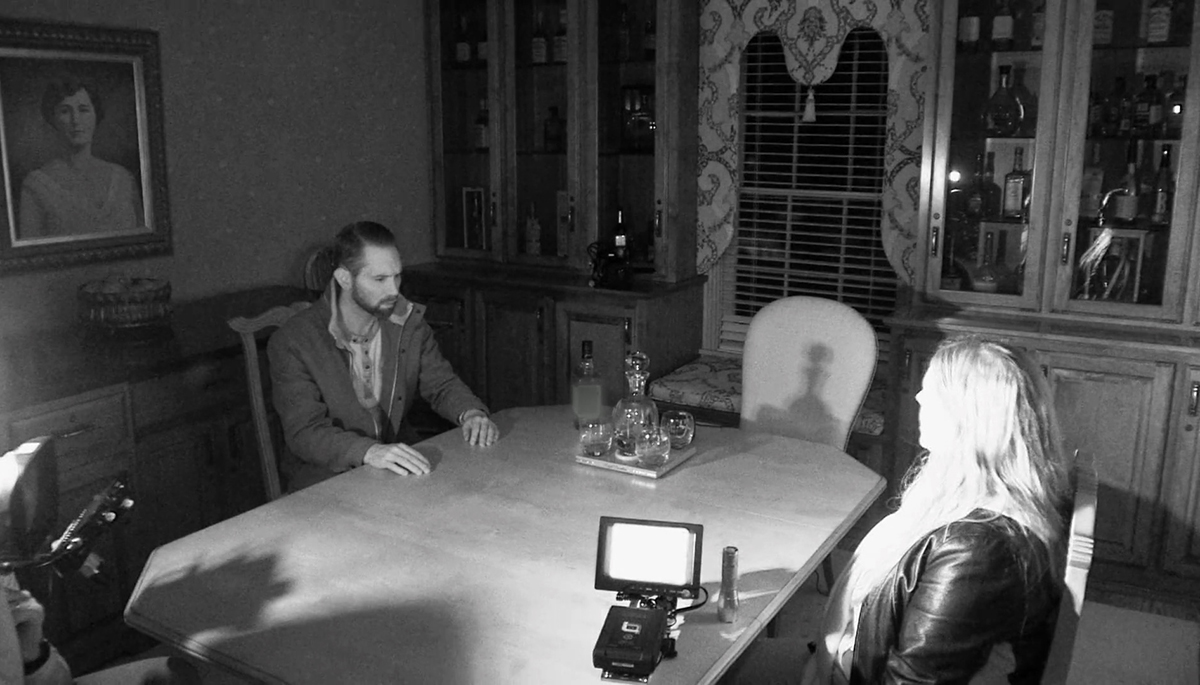 Next the pair returned to warehouse D where they wandered between the rows of hundreds of barrels calling out to the spirits. Soon they started hearing what sounded like something moving above them. Because they keep hearing the sounds upstairs while they are downstairs, they decide to split up. Nick goes up to the 8th floor.
Both investigators heard a loud sound which seemed to be coming from Katrina's floor. The sound was heard moments after Nick had asked any spirits present to make a noise near Katrina. Nick ran back to Katrina to find out what had happened, but she wasn't able to tell where the sound had come from.
Based on the activity they'd experienced, Nick decided to sleep alone in warehouse D, while Katrina spent the night in warehouse K.
On their final day of the investigation, Nick and Katrina's aim was to gather evidence to validate the workers' paranormal experiences. They team up with local paranormal investigator, Lee Kirkland in warehouse D. They were once again using the clever ghost-detecting decanter and shot glass set. They were using their audio communication device at the same tine, this seemed to spew out the word "Kentucky." Moments later a sound was heard that the investigators thought sounded like "hello, Lee."
Lee called out to the spirit and offered to pour them a drink, as he did something in proximity to one of the glasses caused the decanted to light up green.
Nick and Katrina were once again alone for their final night at the distillery. They spent their final few hours in warehouse K where they had motion-detecting light strips that will illuminate if anything moves across them. As they were setting the equipment up, they heard what they thought sounded like a dragging sound.
Katrina then saw something move in the darkness in the distance, moments later Nick heard what he thought sounded like a girl humming or singing. As Nick was describing the moment, the sound was heard again, this time it was captured on camera but the investigators didn't seem to hear it. This was followed by their light strips triggering and then Rob caught a strange mist on camera.
Towards the end of the investigation they suddenly smelt flowers, an unexplained phenomenon that is one of the most commonly reported by employees working in warehouse K. This experience does seem to validate the workers' paranormal experiences.
Nick sums up the investigation with what just sounds like a commercial for Jim Beam, "this location has so much history, it's very iconic and without the spirits that once lived and worked here, this building wouldn't be what it is today. And I think that's what's amazing about Jim Beam."
'Paranormal Lockdown US' continues next week on Really as part of the channel's #Freakend event, bringing viewers three nights of paranormal entertainment every Thursday, Friday and Saturday.
You can watch in the United Kingdom and Ireland as part of the Discovery family of channels. You can watch Really on Freeview (17), Sky (142), Virgin Media (129) and Freesat (160), plus YouView, BT TV and TalkTalk TV. Or watch previous episodes on demand on Discovery+.