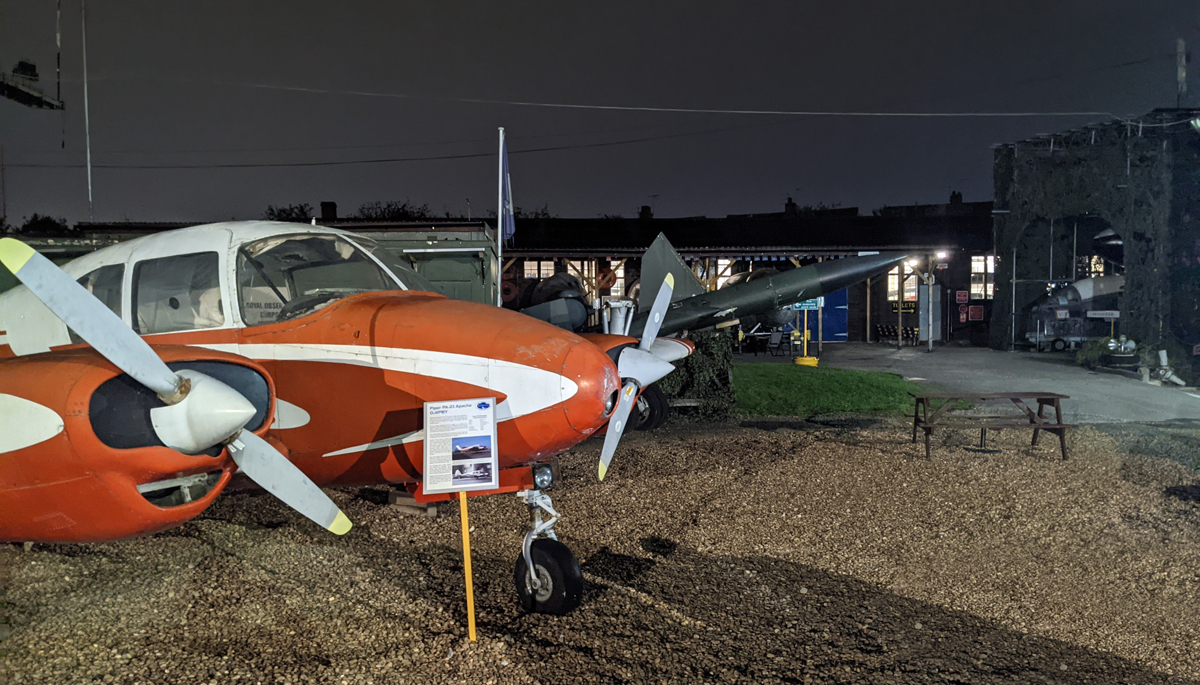 At the weekend, I joined the Most Haunted Experience (MHE) team and their guests for a ghost hunt at an unusual location. Rather than the normal haunted castle or creepy stately home, we spent the night searching for ghosts amongst the historic planes and helicopters on display at a former RAF base in Doncaster.
Having played an important role in the first and second world wars, the airfield was reverted to civilian flying after WWII and eventually closed in 1992. The remaining original RAF buildings now house the South Yorkshire Aircraft Museum, and at the weekend it played host to about 30 members of the public who had come together to try their hand at ghost hunting, joined by 'Most Haunted' stars Karl Beattie and Stuart Torevell.
If you're a believer in residual energy, the idea that echos of the past can attach themselves to places or objects, then there couldn't be a better place to investigate than Doncaster's air museum. The vast site houses a treasure trove of aviation history, from the early years of flight through to modern day aircraft, plus of course wartime planes and memorabilia.
An interesting attraction by day, but at night there have been reports of disembodied voices and phantom footsteps heard within the dark hangars. Fleeting shadows and dark figures have been seen moving in the eerie offices and corridors. Guests claim to have felt icy cold spots, picked up on the unexplained smell of burning, been touched by unseen hands, felt inexplicable bouts of sorrow, and even seen an apparition of a pilot wandering the site. 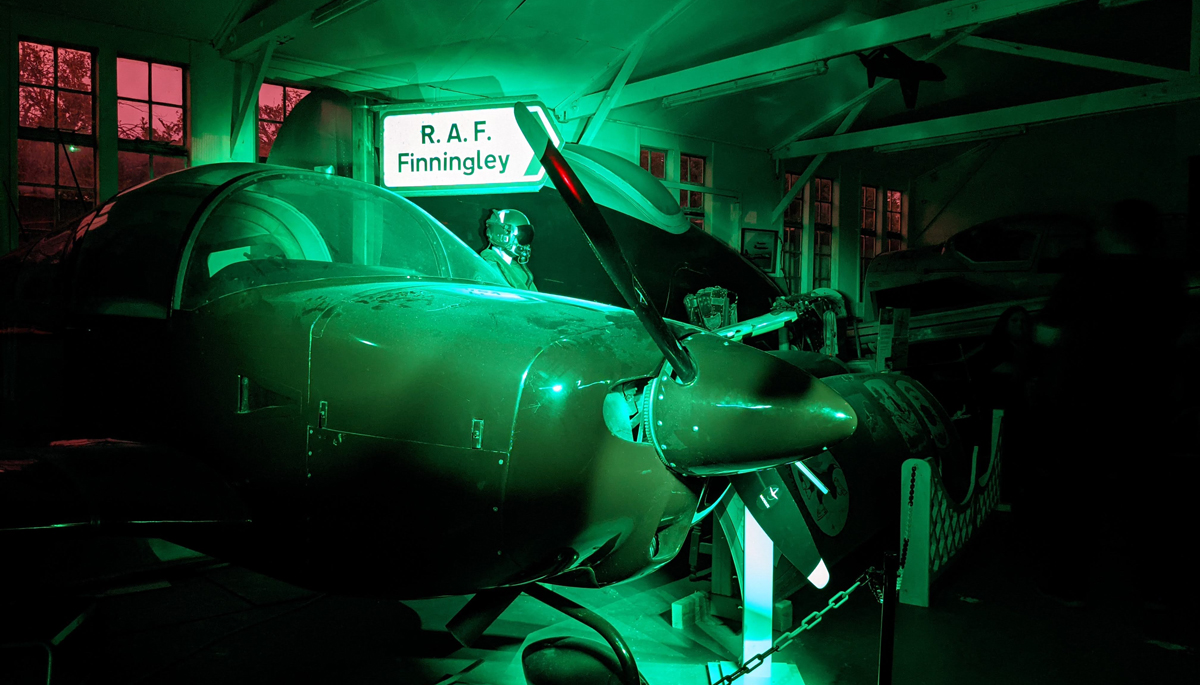 After the usual welcome to the event and the chance for fans of 'Most Haunted' to meet the stars of the show to grab a selfie, we were split into two groups and headed out into the museum to begin our investigation, lead by the MHE team. The collection is spread across several buildings, including a huge main hangar, an administrative block and several aircraft on display out in the grounds, all of which were especially eerie and atmospheric by torch light.
The group I was in started out in the old office block, which is now full of exhibits relating to the history of aviation. In one of the larger rooms, surrounded by examples of early aircraft, we were joined by Stuart. As one of the lead investigators with almost 20 years experience on 'Most Haunted', Stuart is no stranger to calling out to the ghosts at haunted locations.
Calling out, or asking out, is when a paranormal investigator speaks aloud in an attempt to encourage any spirits which might be present to communicate with them. The classic ghost hunter's trope is, "hello, is anybody there?"
If you're new to ghost hunting, you might feel a little self conscious calling out, but Stuart, who is a natural at it, gave our group some great tips on how to call out. Stuart understands that it can be a bit unnatural to start with. While in total darkness, he told the guests, "you're with people you don't know, so you feel a bit silly and embarrassed, and that's part of the reason why as the night goes on that'll change."
But despite those initial feelings of embarrassment, Stuart reassured the guests that when it comes to calling out there is "no right or wrong, as long as you're talking to them like we're having a conversation now, you can talk about anything you want."
Stuart says that anyone can do it. He explained, "all it is is talking, all we're doing is talking to them - whatever you're comfortable with really." He continued, "normally people talk at them, you've got to talk with them, you've got to talk like they're already here before you've even seen them."
It's Stuart's belief in the fact that there is someone there in spirit form listening that gives him the confidence to call out so clearly and naturally. He says it doesn't matter what you say to them, just talk to them as people. He said, "tell them your name, tell them you've got kids, tell them what you've had for lunch, tell them if you believe in the paranormal or not, because if you say 'I don't believe in that, I think it's all a load of rubbish' they might do something to you, they might tap you on the shoulder and say 'look, we are here'."
Although anything goes when it comes to calling out to spirits, Stuart did warn that you do have to consider the location you are investigating and that being demanding and confrontational isn't a good approach. He said that on a former airfield being civilised and respectful was key, "if we were all rowdy and we were all effing and jeffing, I don't think they'd do anything - it might work in a prison - but here, I think you've got to be quite civilised."
After sharing his tips with the group, one of the guests gave it a shot. She confidently said, "calling out to any spirits that are in this room, come and talk to us."
A little while later, the guests got to hear the master at work as Stuart began to call out with his normal respectful, detailed and confident patter. He loudly and clearly said, "if there is anyone with us in this building - it's quite a large building actually, there's two groups of people in this building if you can see us - can you please show us a sign, do anything at all that you can just so we know you're with us. You can come and walk next to us, or even walk up and down the corridors so we can hear your footsteps." 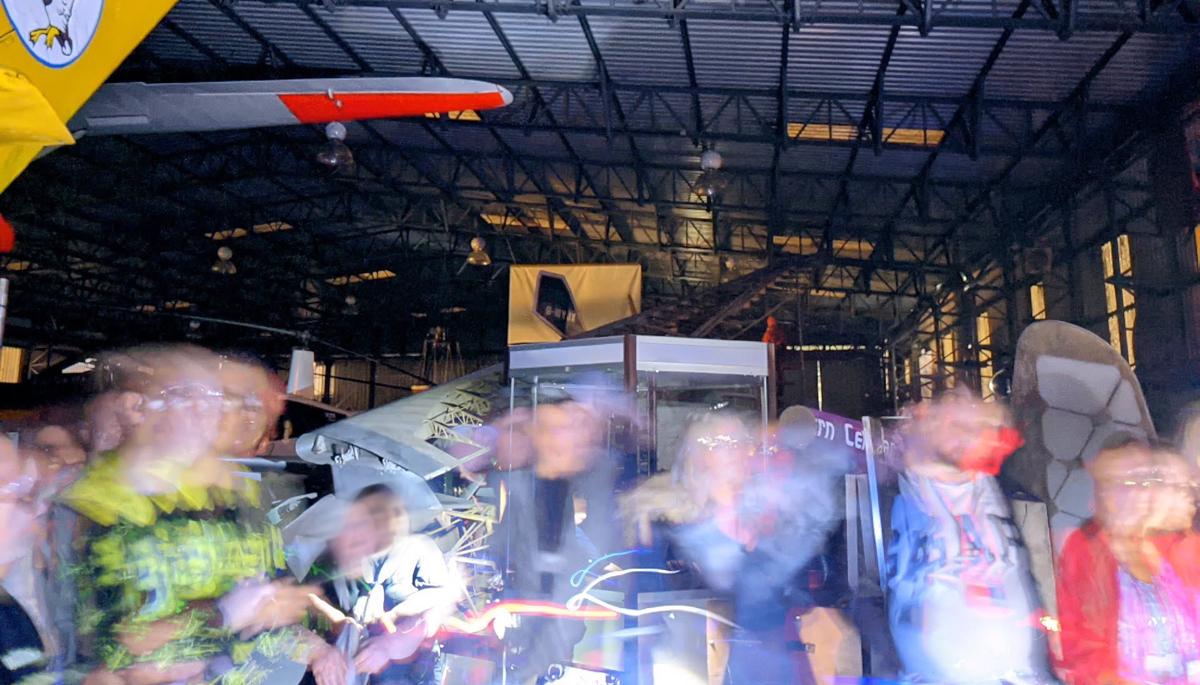 After our lesson in ghost hunting, we continued our investigation of the airfield. Guests put their new skills to use with the help of the MHE team in various parts of the site, including various rooms in the administrative block and a small hangar packed with aircrafts.
Our final vigil of the night was held in the vast main hangar where a huge array of aircraft, helicopters and engines were on display. We worked our way through the maze of walkways past the exhibits in the darkness.
The team were well armed with various ghost hunting gadgets, including K-II meters to detect spikes in the ambient electromagnetic field and cat balls. The use of a pet toy may seem strange on a ghost hunt, but these plastic balls respond to touch. If they are moved they light up to excite the cat playing with it. They can be a little temperamental in that they false trigger when not moving, or don't trigger at all when being moved quite significantly, but in general the idea is that a ghost can give the ball a nudge and cause it to light up.
It was during this experiment that Stuart's advice from earlier in the night was put into practice in the best possible way - "it doesn't matter what you say to them."
Having had the cat toy trigger a couple of times, one guest called out "light it up if you want us to leave". To be contrary and test the spirits, I then asked "light it up if you want us here." But to the amusement of the other guests, one gentleman at the event called out "light it up if you don't give a s**t whether we're here or not."
The line got a good laugh from his fellow ghost hunters, something that can only help to raise the energy on a ghost hunt, but sadly on this occasion the spooks of South Yorkshire Aircraft Museum failed to take the bait.
If you'd like to book your own ghost hunt with Most Haunted Experience, you can find more information at mosthauntedexperience.com.
Add A Comment
Tags:
ghost huntsmost hauntedmost haunted experienceparanormal