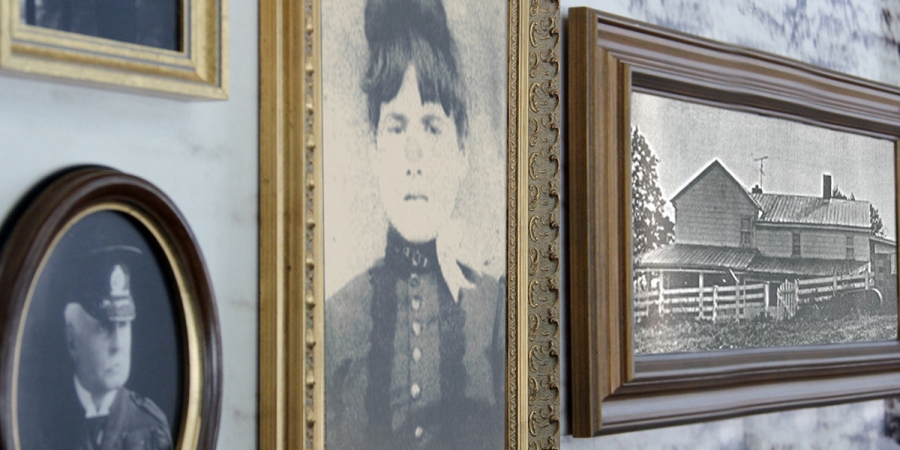 We love a ghost story here at Paranormal Hub, and spooky tales don't get much better than the case of the Greenbrier Ghost.
Let us take you back to the 1890s in the rural Greenbrier County, nestled in the Alleghany Mountains West Virginia, where the spirit of a young woman help solve her own murder case - the only known case to this day in which testimony from a ghost helped convict a killer.
A lot of ghost stories contain the phrases "it was said that..." or "it's claimed the ghost..." but not in the case of the Greenbrier Ghost, which was well documented in a court held in the county seat of Lewisburg.
Zona Heaster was born in Greenbrier County in 1873 and grew up in the small farming community of Richlands. It was here that she met Edward Shue soon after he moved to the area to start a new life. He'd taken up a job in a local blacksmith's shop. The two fell in love and were soon married.
Less than a year after they tied the knot, Zona was murdered. Her body was discovered by a young boy who was visiting the Shue House on an errand. She was found lying at the bottom of the stairs, with her feet together and one hand on her stomach.
The local doctor, George Knapp, was called and arrived at the house an hour later. He concluded that Zona had died of natural causes, recording her cause of death as "everlasting faint." Upon hearing the news, the victim's mother, Mary, declared "the devil has killed her," but for a while it seemed that Mary would never find out what really happened to her daughter.
Zona was buried in Soule Chapel Methodist Cemetery with her true cause of death never having been discovered. Her distraught mother removed a sheet from the coffin before the burial and took it home to wash, but when she dropped it in to a basin, the water turned red. The sheet then turned pink and the water cleared. Mary took this as a sign that her daughter had been murdered.
Four weeks later, Mary finally got the answers she'd hoped for. A bright ghostly light appeared before her one night, which slowly took the form of Zona as the room grew icy cold. The apparition of her daughter told her that Edward was a cruel man who abused her.
The vision visited over four consecutive nights and told her mother that her husband had attacked her in a fit of rage when he believed that she had not prepared his dinner. Edward broke Zona's neck, the spirit proved this by rotating her head 180 degrees.
The terrifying vision lead Mary to visit John Preston, a local prosecutor. She told him her eerie story and was able to convince him to re-open the case of her daughter's death. Preston sent his deputies to interview several people involved in the case, including Dr Knapp.
Eventually it was decided to exhume Zona's body and she was examined in a small local school building over the course of the next three days. It was found that the victim's neck had been broken. The official report stated, "the discovery was made that the neck was broken and the windpipe mashed. On the throat were the marks of fingers indicating that she had been choked. The neck was dislocated between the first and second vertebrae. The ligaments were torn and ruptured. The windpipe had been crushed at a point in front of the neck."
Based on this evidence Edward was arrested and charged with the murder of his wife. In court Mary stood by her story of the ghostly visitation of her daughter, the story was accepted by the court and she was widely believed by the greater community.
It will come as no surprise that Edward Shue was found guilty of murder and sentence to life in prison, but only served six years before dying of an unknown illness.
Mary never retold her story of her daughter's ghost and Zona's apparition never appeared again.
The story is today remembered by a state historical marker near Soule Chapel Methodist Cemetery which reads...
Interred in nearby cemetery is Zona Heaster Shue. Her death in 1897 was presumed natural until her spirit appeared to her mother to describe how she was killed by her husband Edward. Autopsy on the exhumed body verified the apparition's account. Edward, found guilty of murder, was sentenced to the state prison. Only known case in which testimony from a ghost helped convict a murderer.

So What Really Happened?

Well, it could have been that the ghost of Zona genuinely came back to visit her mother and tell her exactly what had happened to her. The truth is, we'll never know if this event genuinely occurred or not, but there are some other more rational possibilities.
It could be that Mary truly believed that the ghostly visitation really happened, while it might have actually be a product of her own mind.
Mary took an instant dislike to Edward and was against her daughters marriage to him. In fact after her death she was already convinced that Zona was murdered and that Edward was the killer. After the funeral she prayed every night for four weeks, hoping that Zona would return to her to explain how she had died.
A mother's grief combined with a strong obsession and want to see her daughter one more time for an explanation could have caused her to imagine, hallucinate or even dream about her encounter with Zona's ghost.
Another possibility is that Mary, as a desperate mother, fabricated the story. It might have been the intention of Mary to tell the story and gain support from the local community in order to pressure John Preston into hearing her case. It's been suggested that many locals had begun to believe that Zona had been murdered, which helped Preston come to his decision.
Whether Mary really encountered a ghost, dreamt it or made up the story, it had the desired effect and eventually led to the conviction of Edward. However, although Mary's ghost story wasn't dismissed in court, it wasn't taken into consideration by the prosecution.
By the time the case got to court, the ghost story wasn't needed for a prosecution. It turns out there was a lot of evidence that was overlooked during the initial investigation into Zona's death.
On the night of her murder, in the hour it took the doctor to arrive, Edward had carried Zona's body upstairs and laid her out on her bed. He prepared the corpse for burial, dressing her in a high-necked dress with a stiff collar that he hoped would hide her broken neck.
In fact Dr Knapp did notice some bruising on Zona's neck, but when he tried to examine it Edward became aggressive and pushed the doctor away calling an end to the examination.
At the burial Edward didn't leave the side of his deceased wife's coffin. He refused to let guests get too close to her, and in an unusual and suspicious move, placed pillows on either side of her head to help her "rest easier". As if he couldn't be any more suspicious, he wrapped a large scarf around the neck of the body, claiming emotionally that it had been one of his wife's favourites.
Once Preston learned from Dr Knapp that he had been unable to properly examine the body due to Edward's interference, he had all he needed to request an exhumation and autopsy. Of course, Edward was strongly against this and confessed that he thought he would be arrested as a result of the autopsy, but said that no one would be able to prove him guilty.
But based on his behaviour during the inquest and newly uncovered evidence about previous abusive marriages, Edward was found guilty without the testimony of Zona's ghost, as retold by her mother, playing any significance in court.
The new evidence about Edward's abusive past was uncovered while he was being held in a Lewisburg jail before his trial. It had turned out that he had been married twice before. The first relationship ended in divorce and his second wife accused him of being abusive before dying in mysterious circumstances less than a year after they were married.
No matter which possible version of the events you believe, the Greenbrier Ghost is a fascinating story made all the more special by its lasting historical documentation and the historic marker re-telling the story for future generations.
Add A Comment
Tags:
paranormalghosts