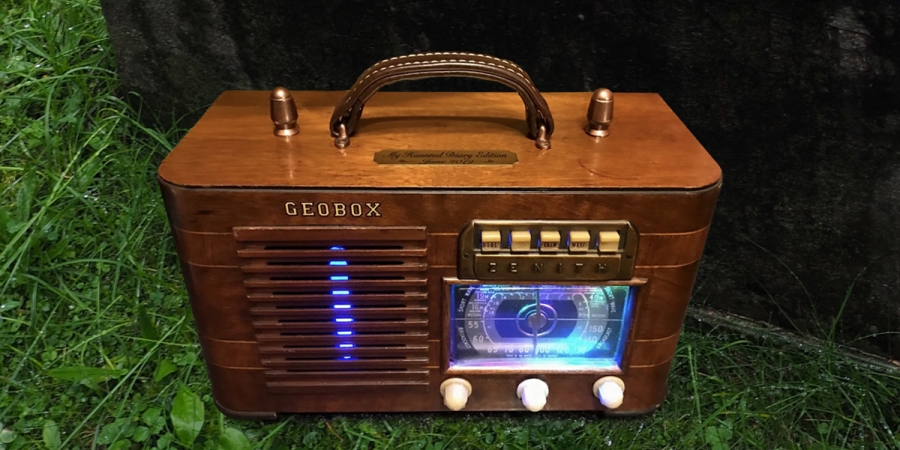 You may have heard the strange echoey voice coming out of the speaker of a retro looking device on 'Paranormal Lockdown'. Perhaps you've heard the show's stars Nick Groff and Katrina Weidman mention the GeoBox or GeoPort and wondered what they are. Well, here's everything you need to know....
The GeoPort and GeoBox are ghost hunting gadgets designed and created by Ohio-based paranormal inventor, George Brown. He has a background in electronic engineering and a lifelong passion for the paranormal. His stunning handmade devices are retrofitted into beautiful original vintage wooden radio cabinets.
George's inventions fall into the category of ITC devices, which stands for Instrumental Trans-Communication. ITC is any form of communication between spirits and the living through an electronic device.
The first box was completed in 2015, and since then they've been used extensively by Nick and Katrina in both seasons of the US ghost hunting show, plus the British spin-off series, 'Paranormal Lockdown UK'. Since the show was cancelled in 2019, Katrina has moved on to work with Jack Osbourne in the Travel Channel series, 'Portals To Hell' and she's taken a GeoPort with her.
At least one of George's inventions features in pretty much every episode of 'Paranormal Lockdown', but one of the GeoPort's most impressive demonstrations came at the start of the show's second season at the creepy Monroe House in Indiana.
Nick and Katrina were using the device in the abandoned kitchen, where they heard what they thought were voices saying "basement" and "dig" come through the device's speaker. This led Nick to explore and a crawl space in the basement, and have a terrifying experience there.
The home's owner, Eddie Norris, followed the instruction to "dig" in the crawl space and was amazed to find what looked like human bones buried in the soil beneath the house. As Eddie and Nick continued to brush away the soil, they found a skull. At this point they were forced to stop what they were doing and call the police.
Nick and Katrina felt sure that the voices they heard through the GeoPort directly lead them to a buried body beneath the house.
The GeoBox also proved useful during Nick and Katrina's investigation of the sinister Trans-Allegheny Lunatic Asylum in West Virginia. The first response that came through the box there was a female voice simply saying "hello". In response to this, Katrina promised to leave the spirit alone if it said her name. Katrina seemed to get the response she wanted and her named echoed out of the box at her. A shocked Katrina said, "when my name came out of the GeoBox, I didn't believe it at first. And I'm listening back to our recording of it and you can, you can hear 'Katrina'."
Perhaps the most chilling piece of evidence captured by the duo using one of George's inventions was while they were in the UK filming in the historic and abandoned Shepton Mallet Prison.
Nick and Katrina were in what was once the hanging room armed with a GeoPort. A female voice came through the device, speaking in whispers but very clearly saying "I don't want to die." Both of the investigators were shocked by the voice. Nick said, "we've never experienced this before, this spirit completely bypassed the sound banks on the device and we heard a clear tonal voice coming through." 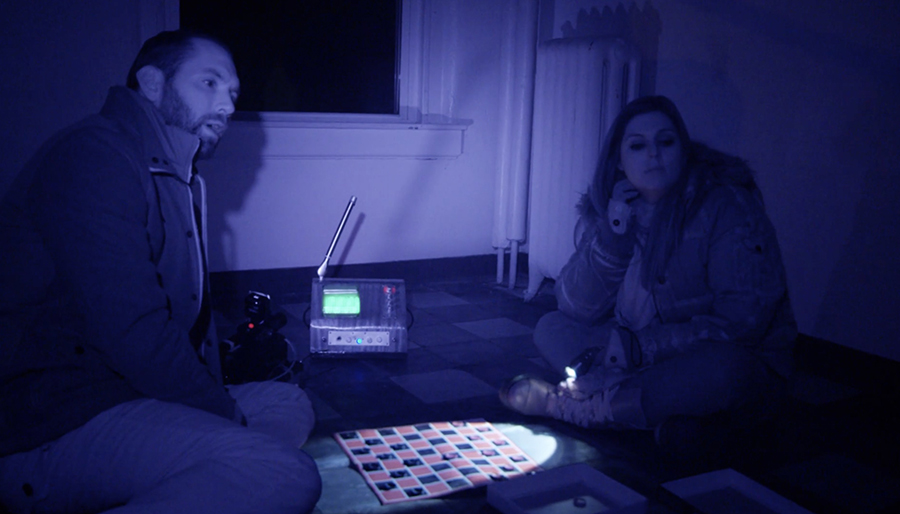 On TV Nick says the devices operate by tapping into three different frequencies. He explains "you have EMF, vibrational waves and also radio frequency." By monitoring these three differing types of energy it's believed that spirits can come through and offer intelligent responses, which are spoken aloud from the device.
Nick's description is a little confusing since radio frequencies are a type of EMF (electromagnetic frequency) themselves, but commenting on his Facebook page, even George admits he doesn't understand exactly how his inventions work. He wrote, "there’s things I don’t yet understand [about the device] to be honest, even as the inventor."
The radio frequency element of the device is easy enough to understand as the two devices rely on the same principle as a spirit box, which is essentially a hacked or modified radio that rapidly scans through the AM or FM radio spectrum, as it does the sounds of white noise and fleeting snippets of radio broadcasts can be heard. It's believed that spirits are able to change or influence these bursts of audio in order to form sounds, words or even sentences.
In the case of the geo-devices, you plug a hacked radio into a standard 3.5mm audio jack input that George has built into his antique radio cases, this provides the radio frequency input.
The EMF element of the devices' input refers to a specific range of the electromagnetic spectrum, the frequencies picked up by EMF meters, like the popular ghost hunting gadget, the K-II.
The radio and EMF signals are then fed into a reverb device which allows modulation, this is what gives the boxes their distinct echoey sound.
In the original GeoBox, which is a fully analogue device, the reverb device works on the principle of vibrational waves passing along a spring. Because this is a physical component, it may be possible for things in its vicinity, including spirits, to manipulate it and re-modulate the source sound.
The main difference with the newer GeoPort is that the reverb device has been replaced with a digital component. In this model it's less clear how vibrational waves can influence the device in order to cause re-modulation. However, the voices are clearer than on the GeoBox, but come through less frequently on the GeoPort, perhaps because the digital version has reduced background noise and less radio bleed.
The audio processing in the Geo devices drastically reduces the level of the characteristic radio noise produced by spirit boxes as they sweep through the spectrum. This makes it easier to hear the voices, which are output through the boxes' built-in amplifier and speaker. In most models the audio is visualised using a multi-colour LED display on the front of the box.
The boxes also have Bluetooth built in which allows you to connect a smart phone running ITC apps, such as The Portal app as used by Steve Huff, founder of the YouTube channel Huff Paranormal.
Each GeoBox and GeoPort has an in-built rechargeable 12v li-ion battery, and has some basic controls like a power switch, volume knob and controls to toggle the LED spectrum display and Bluetooth on or off. But because each box is handmade, the features vary.
Some builds have dual EMF pick ups. Some have simple LED display lights, while other have more elaborate animated displays. There are mono and stereo versions, and even versions that combine the functionality of both the GeoBox and GeoPort. 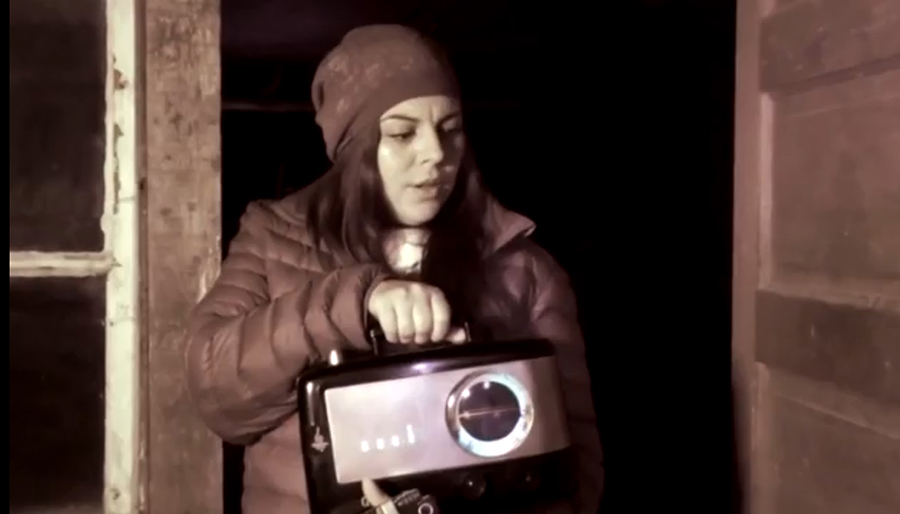 Because each GeoBox and GeoPort is meticulously made by hand, usually over a period of three to four weeks, the devices come with a hefty price tag. Much of the cost is tied up in antique radio shells which George builds his devices into.
If you're interested in getting your hands on a box, it will cost you at least $2,000 and you may find there's a bit of a backlog on orders due to demand.
The boxes get even more expensive if you want a newer model, which has two complete GeoBox and GeoPort units built into a single device. It allows investigators to use the original analogue plus the new digital version simultaneously so they can be sure they're not missing any potential evidence.
Writing on Facebook, George said he's attempted to create a cheaper and more accessible version of his devices. He said, "I have tried to make cheaper ones but they just don't work nearly as good." He added, "I like to take my time and build these and test them so that they are dialled in really well."
For George, each box he produces is almost an individual piece of art and an opportunity for him to express his creativity. He said, "I enjoy making the device a showpiece."
You can find out more about George's work, the GeoBox and the GeoPort on his official website, GeoBoxspiritbox.com. Or follow George on Facebook for news on product releases and items for sale.