This article is more than two years old and was last updated in June 2021. 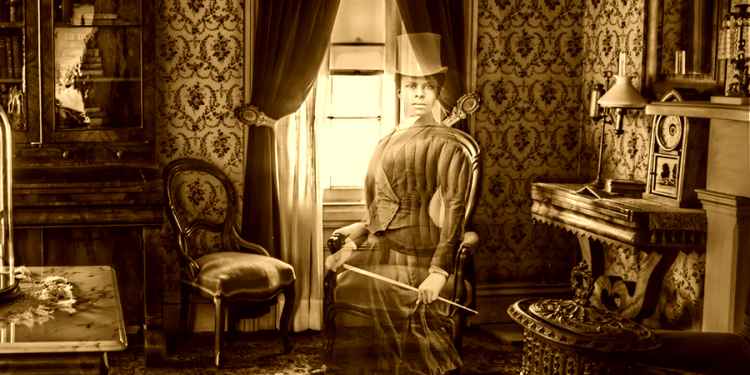 Britain is known for its ghost stories, creepy tales that have been told for generations as well as more recent sightings at some of the allegedly most haunted places across the UK, but why is it that every ghost is white?
Think about it. I'm sure you can reel of famous ghosts of white celebrities, former kings, Civil War soldiers, grey ladies, murder victims and Victorian gentlemen, but can you think of any black ghosts off the top of your head? Or Asian, hispanic or any other race for that matter?
The answer to this question probably comes down to our own stereotypes and preconceptions. If most people are asked to picture a doctor in their mind, they'll think of a man in a white coat, but of course a woman can also be a doctor. Sadly, we jump to these same conclusions with race. If you were asked to picture a Victorian gentleman, chances are you would think of a white man in a double-breasted waistcoat and perhaps a stovepipe hat.
This isn't our fault. It's a problem that inherent with western culture as a result of what we've read in books, heard in classic ghosts stories, and seen in movies. It's a reflection of the fact that these were mainly white people writing about their mainly white world.
Black men and women have lived in Britain since at least the 12th century, but it was the British Empire that caused their numbers to swell exponentially in the 17th and 18th centuries - at least a century before the Victorian era. So, we should see their ghosts too.
What makes their absence even stranger is that manor houses and stately homes are common locations for paranormal investigators to carry out their research, often in the servants' quarters. At this time it wasn't uncommon for servants to be black, especially with the rise of the slave trade. Slavery was legal in Britain until 1772, and many of these Africans found themselves working as butlers or other household attendants for wealthy families.
Slaves and servants were often written out of stories or news at the time, because of the inherent racism in society. So again, they wouldn't have found their way into the ghost stories that shaped out perceptions of what a ghost is.
Most paranormal investigators make contact with ghosts and spirits via Ouija boards, by using this method they're only communicating via taps, movement or disembodied voices. Paranormal investigators frequently ask questions like "how old are you", "are you male or female" and "how did you die?" But, it's pretty uncommon to hear an investigator try to narrow down details about physical appearance, whether it be height, hair colour or of course skin colour. Investigators here in Britain just seem to assume they are white - because that's our preconceived notion of what ghosts look like.
We also get a lot of American ghost hunting shows on television here, as well as the British ones. These shows are usually made up of all-white teams of mostly men. These teams often jump to the same conclusion as us by assuming all the ghosts they encounter are white, which reinforces our prejudice.
However, paranormal shows aren't just popular in the Western world. Ghost hunting is pretty popular in Asia too, where there are plenty of investigation teams and paranormal television shows and the ghosts they encounter are all of Asian origin.
It all just comes down to your local folklore, myth and legends. In the Southern US states, it is not uncommon to encounter an African-American ghost, they are mostly said to be a by-product of historical slavery. And in South America black ghosts are commonplace in folklore.
However, I could be completely wrong. As a white man who attends a lot of public ghost hunting events, I have to admit I can't recall ever seeing a black ghost hunter. To my knowledge there are no famous or prominent black ghost hunters, at least not in the UK - the only exception being the all-black team from the US show, 'Ghost Brothers'. So perhaps I've just been sucked into this same trap and way of thinking.
Perhaps to break these preconceived notions, the next time you're on a ghost hunt and you make contact with a spirit, maybe you'll think to ask "are you black?"
Tags:
paranormalghosts