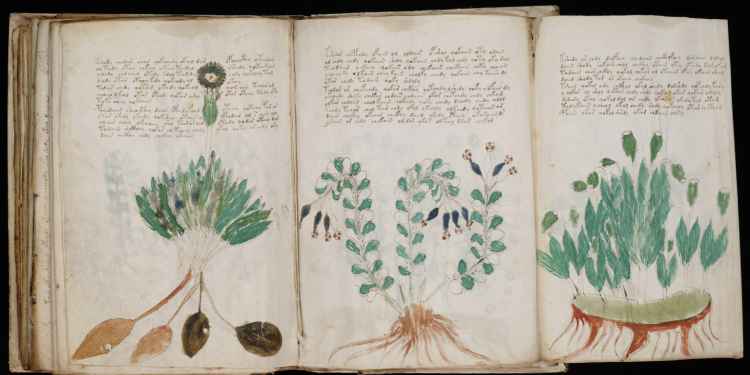 For more than a century experts have been trying to decipher a mysterious hand-written book from an unknown author. The Voynich manuscript has had linguists, cryptographers and even NASA scientists stump since it came into the possession of a rare book dealer, Wilfrid Voynich, in 1912.
Last week an academic from Bristol University, Dr. Gerard Cheshire, made the claim that he had "succeeded where countless cryptographers, linguistics scholars and computer programs have failed". The uni said he was able to identify the language, which is written using characters nobody has seen before.
The lavishly illustrated 240-page parchment book has been carbon-dated to sometime between 1404-1438 and is suspected to have been written in Northern Italy during the Italian Renaissance. Until recently its contents has remained a mystery, until Dr. Cheshire claimed he had gotten to the bottom of this century-old mystery. Apart from a few scraps of latin on some of the pages, nobody has been able to translate a single word until now.
The university originally claimed that the academic had cracked the coded message and illustrations in just two weeks "using a combination of lateral thinking and ingenuity."
Cheshire's theory is that the manuscript is a therapeutic reference book written by nuns for Maria of Castile, Queen of Aragon, and is the only surviving example of text written in a lost language called "proto-Romance". Cheshire called the breakthrough "one of the most important developments to date in Romance linguistics."
After Cheshire's theory was published for peer review, Dr. Lisa Fagin Davis, executive director of the Medieval Academy of America, tweeted "sorry folks. This is just more aspirational, circular, self-fulfilling nonsense."
This has lead Bristol University to backtrack and distance itself from Dr. Cheshire, and the article about his theory has been deleted from the university's website, stating that concerns had been raised "about the validity of this research from academics in the fields of linguistics and medieval studies."
Although the uni originally took credit for Dr. Cheshire's work, calling him "a University of Bristol academic", they now say "the research was entirely the author's own work and is not affiliated with the University of Bristol, the school of arts nor the Centre for Medieval Studies."
The manuscript is written using 20-25 unrecognised characters to form what appear to be 35,000 words and split into six different sections: herbal, astronomical, biological, cosmological, pharmaceutical and recipes. It has been describe one of the biggest mysteries that science can't solve.
Some think it's attempting to detail information around medicine, with a focus on plant life which formed a central part of medieval medical knowledge. Others think it's perhaps a work of art, not intending to have any meaning apart from that of display.
Others think it could all be a hoax, but the book, the parchment and the paints and inks used have been extensively tested and determined to be authentic. The effort involved in its production lead many to conclude the book can't be a hoax, and was written with a code we just haven't been able to crack yet.
Add A Comment
Tags:
unexplainedtopicalbristol