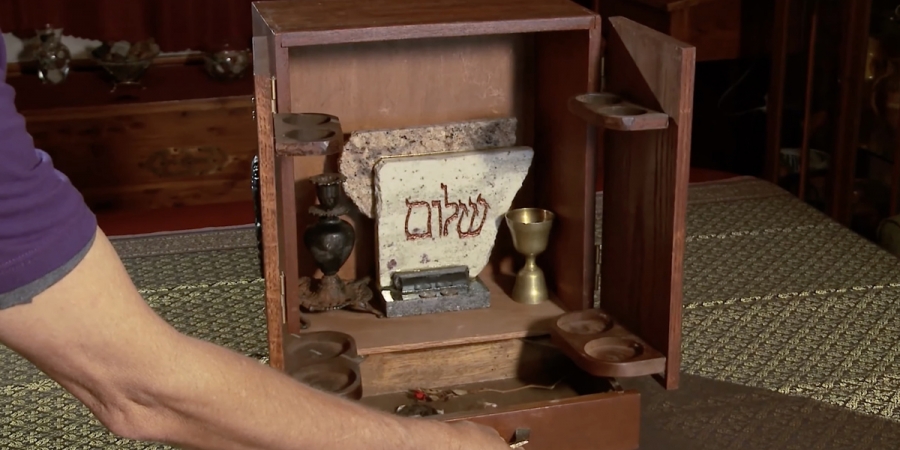 Photo: © The Paranormal Network
The movie website JoBlo recently launched a new series on their YouTube channel, The Paranormal Network. In the second episode of 'Haunted Objects' host Evan O'Hare explores the true story of the dybbuk box, which inspired the 2012 Sam Raimi horror film 'The Possession'.
The 11 minute long episode opens with Evan setting the tone in the very atmospheric Antique Legacy store in San Anselmo, California. He says, "what would you do if you found out something you cherished was possessed? Would you try and throw it away? Destroy it? Maybe sell it to some unsuspecting buyer? And how did it become haunted in the first place? Those are the questions we're going to ask as we explore those very objects, some you might be familiar with others so obscure that they've been lost to the sands of time until now."
In the new episode, written by Carly Street, Evan delves into the weird world of dybbuk boxes, telling us about their Jewish origins, "a dybbuk is a dark spirit that takes over the bodies of living people and uses them for evil. Legend has it a dybbuk can be trapped inside of a box, kept from causing mischief unless that is of course the box is opened."
Evan of course covers the current trend of selling these cursed boxes on eBay, starting off with the original dybbuk box that was owned by Kevin Mannis. Kevin listed the object as a vintage wine cabinet that came from the estate of a woman who survived a World War II concentration camp.
The box later ended up in the hands of Jason Haxton, who for a time buried the box to try to limit its power before eventually reuniting it with Kevin on Zak Bagans' paranormal show, 'Deadly Possessions'. Of course, Zak ended up buying the box, which is now on display in his haunted museum in Las Vegas. During its time in the museum, visitors have attributed fainting, becoming dizzy and feeling sick to the box.
In the second half of the episode, Evan turns his attention to the Wiccan wishing box, which some believe can grant the wisher whatever their heart desires. We're told that this item is not a haunted object, however the metaphysical properties cast upon it provide similar other-worldly happenings.
Holding the small silver-coloured pot, Evan questions whether this is genuinely "a paranormal wishing box or a harmless yet beautiful exquisite looking jewellery box."
To use the box you're required to write you wish on a piece of paper and place it inside before following several steps over a seven day period. Evan says, "they are strong and powerful, it will give you years of great service," but he warns "the box is non-transferable, do not let anyone use your box. this box will have your energies and your wishes it will not work for others."
You can decide for yourself if this enticing item, as well as the dybbuk box, genuinely have supernatural powers by checking out the series on YouTube now.
Previously in the series, Evan has investigated the story of James Dean's "little bastard" and the curious tale of an actual human skeletons being used on the set of the classic 1982 movie, 'Poltergeist'. You can check out the first episode here.
The series is created and directed by Jason D. Morris, written by Carly Street, Mark Francisco and Jason D. Morris, produced by Shoni Alysse Cook, co-produced by Jason Hewlett, and executive produced by Berge Garabedian.
Tags:
youtubeparanormaldybbuk boxtopical