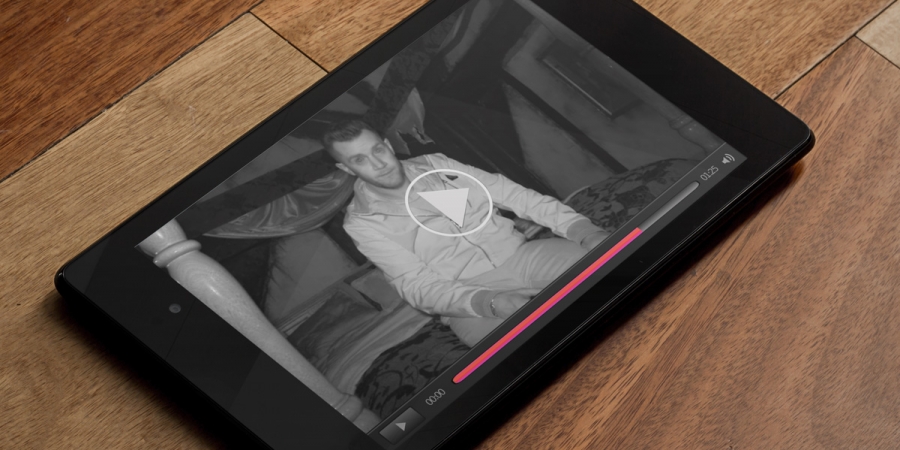 YouTube is the perfect place to discover and watch ghost hunting videos, paranormal research documentaries and real ghost clips for free on some of the biggest supernatural channels the platform has to offer.
YouTube gives smaller paranormal investigation teams and independent ghost hunters the chance to get their paranormal content seen by the world. There are hundreds of paranormal channels on YouTube offering niche supernatural entertainment, including unusual documentary series, whole channels of ghost hunting, and scary videos featuring real evidence of ghost sightings.
Below are some of the biggest YouTube channels of the last 12 months that you should make sure you are subscribed to, plus up and coming supernatural channels with loads of ghostly content waiting to be discovered.

The official YouTube channel for My Haunted Hotel in Chester, a paranormal reality series where the guests become the star of the show. The 17th century Ye Olde Kings Head in Chester dubbed Britain's "most haunted hotel" opened its doors to ghost hunters who are brave enough to spend the night. The nightlong supernatural stakeout is captured on 16 static cameras, giving guests the chance to appear in weekly episodes made up of the highlights of the ghost hunts. Each episode gives an insight in to what it's like to live and work in the most haunted hotel in the UK.
Since the launch of 'My Haunted Hotel' the inn's guest have captured some spectacular paranormal activity, from furniture moving, to unexplained noises, and even a full apparition. Rooms at the hotel are still available at various dates over the coming months and new episodes of the web series premiere weekly.
» Watch on YouTube

Haunted Scouse are Chris Cummings and Adam Billing, two mates who've been on the hunt for ghost for just over a year. Focussing their attention on paranormal hotspots in the areas where they grew up around Liverpool, The Wirral, Merseyside and beyond. They use the high-definition night-vision cameras as well as the very latest technology we will be trying to contact the history of the places we film.
» Watch on YouTube 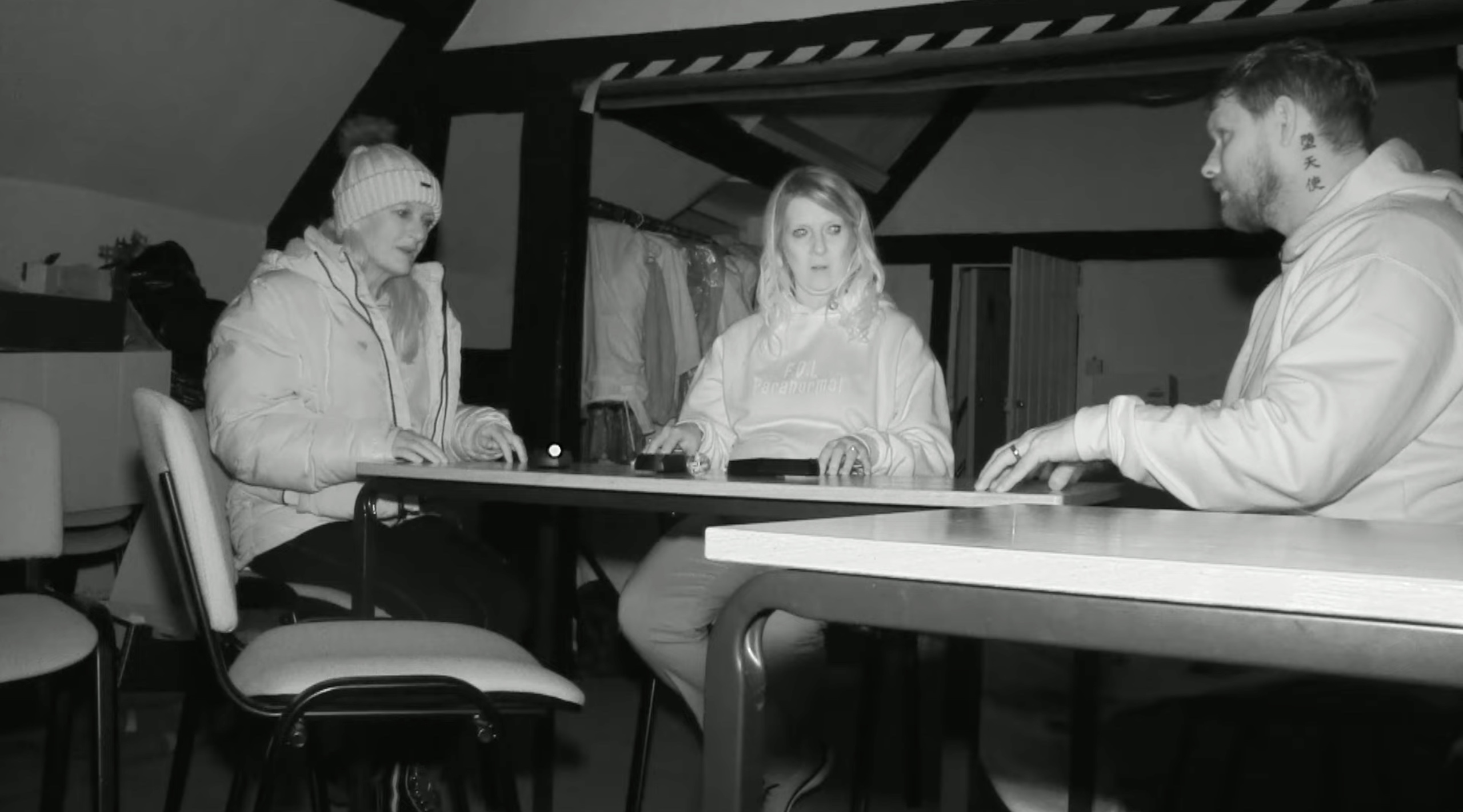 F.D.L. are a group of friends who enjoy all aspects of the paranormal, especially investigating some of Britain's creepiest locations. They're on the hunt for that killer piece of evidence, whether it's a capture on camera or a disembodied voice in an audio recording. The team are lucky enough to get the chance to go in search of spooks at some of the most beautiful and eerie locations around the UK. And in case you were wondering, F.D.L. stand for "friends don't lie," a reference to the Netflix supernatural series, 'Stranger Things',
» Watch on YouTube

Greg and Dana Newkirk have launched a new 'Haunted Objects Podcast' series that will see the ghost-hunting couple dig into the history, folklore, and anomalous activity behind some of the world's most haunted objects. The full-time paranormal researchers, who've appeared in several episodes of Discovery+'s 'Kindred Spirits', will drop a new podcast every other Monday, in which they'll explore the mysteries behind UFO wreckage, examine cursed artefacts, scrutinise psychic research, look at the latest Bigfoot evidence, and more. You can watch each episode on their YouTube channel, Planet Weird, or listen now on all major podcast platforms.
» Watch on YouTube 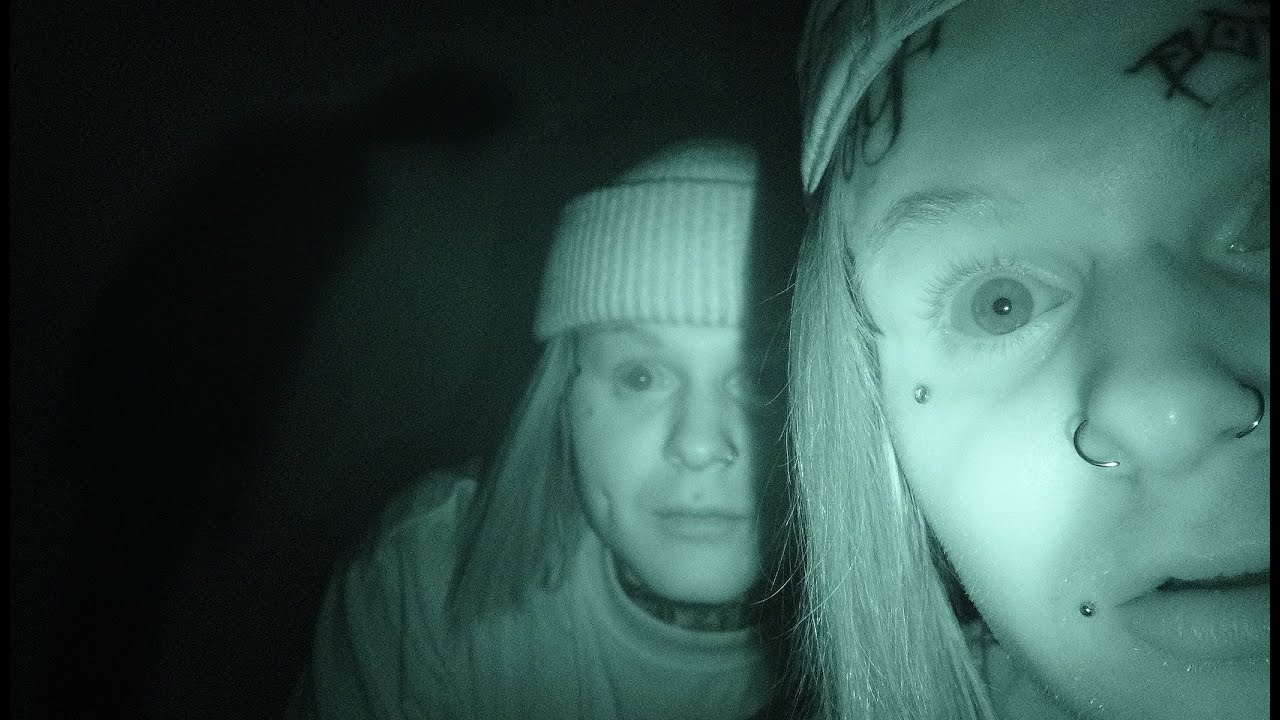 Ryan and River are twins who say they've always had something fallowing them. It all started in Reno NV when their parents moved them into a creepy old three-storey house. Rather than being scarred for life, the experience gave the brothers a passion for the paranormal, and now with the help of Nik and Wyatt, they've taken it upon themselves to find ultimate proof of the paranormal.
» Watch on YouTube

The official YouTube channel of American paranormal investigator Katrina Weidman, best known for her appearances as a lead investigator in 'Portals To Hell' alongside Jack Osbourne, and prior to that as the co-host of 'Paranormal Lockdown' with Nick Groff. In 2022 Katrina Weidman joined forces with fellow television ghost hunter, Heather Taddy, to bring fans 'Travel The Dead', a five-part investigation of White Hill Mansion in Fieldsboro, New Jersey which premiered on Katrina's YouTube channel.
» Watch on YouTube

They might not really be brothers, but there's no denying they make very slick, professional and entertaining paranormal videos. This is evident by the speed at which their channel is growing. The investigation duo from Wolverhampton/Walsall often team up with other paranormal teams in order to search for the truth with a bit of banter along the way. In 2020 the channel won a silver award for the Best Ghost Hunting Series on YouTube in the annual Paranormal Entertainment Awards.
» Watch on YouTube

The gold Paranormal Entertainment Award winning channel follows a couple fascinated by the mysterious world of the paranormal as they take their curiosity across country to some of the most paranormally active locations in America. The series documents the adventures of Connor Biddle, a paranormal enthusiast and India Hopwood, a skeptic with a family history of the supernatural. Together they push the limits of their fear to the max in an effort to communicate with the other side.
» Watch on YouTube 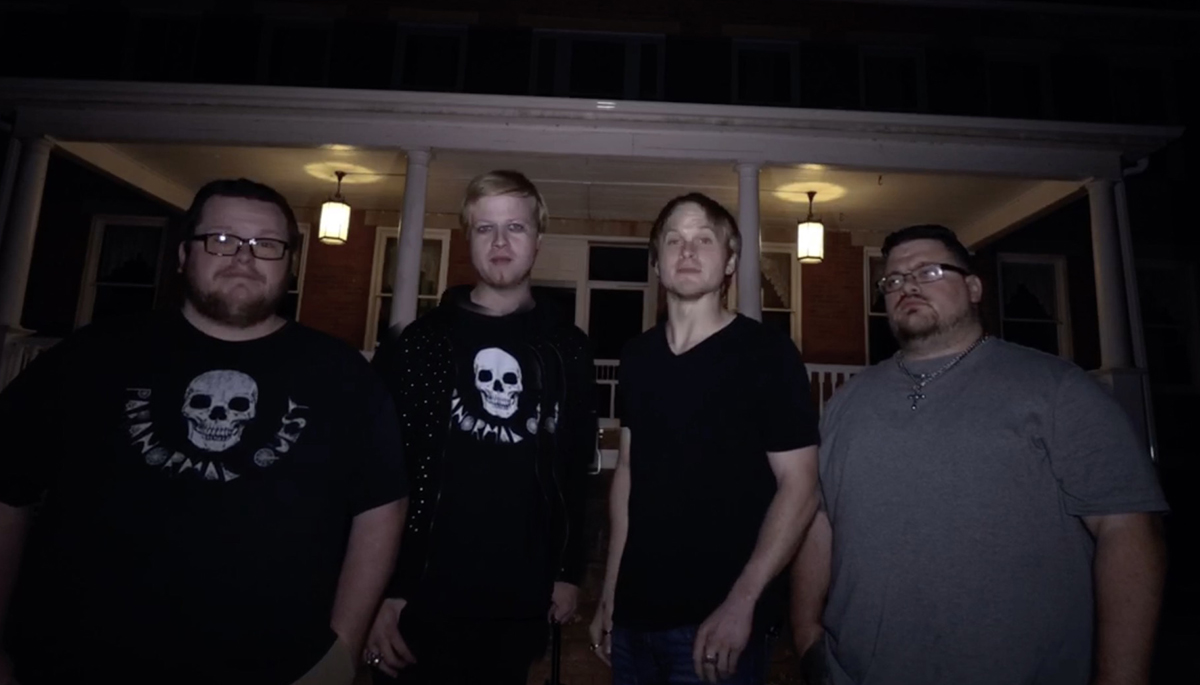 The slick and entertaining YouTube series follows Ryan Zacherl, David Gear, Steve Hummel and Jason McKinney on their quest to seek out paranormal activity at reportedly haunted locations across America. The channel picked up the gold award in the 2020 Paranormal Entertainment Awards for the Best Ghost Hunting Series on YouTube.
» Watch on YouTube

The Paranormal Files is one of the biggest paranormal channels on YouTube. The team explores all things weird, including spirits, religion, cryptids and even extraterrestrials. Over the years, lead investigators Colin Browen and his significant other Payton McWhorter have captured a number of extreme paranormal events on camera, including physical attacks, crystal clear spirit voices and even what appear to be apparitions on camera.
» Watch on YouTube 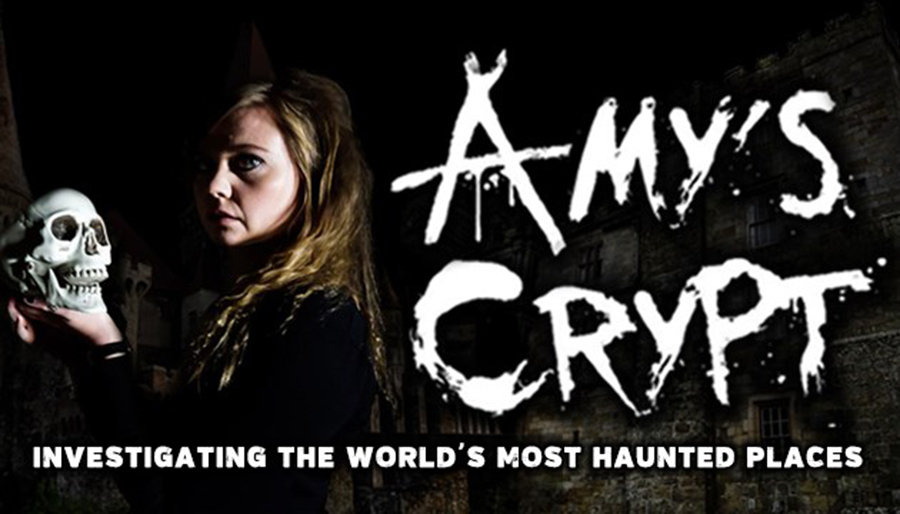 Amy's Crypt is a channel that focusses on horror and exploring all things creepy. Join Amy as she travel around the world to bring you paranormal investigations from some of the most infamous haunted locations. You'll also find ghost stories, scary urban legends, monsters, and a bit of urban exploration.
» Watch on YouTube 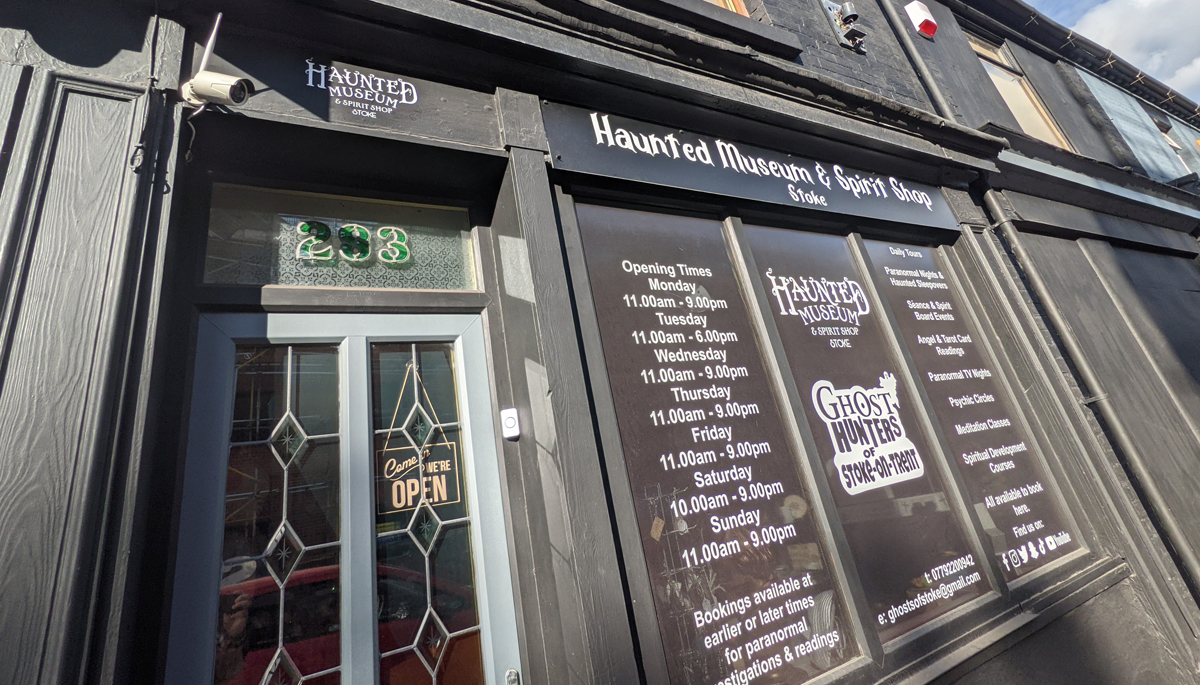 The Haunted Museum & Spirit Shop in Stoke-on-Trent is owned and run by G.H.O.S.T, a group focused on research, investigation and documentation of reported paranormal activity. The team formed to assist those who believe that they are experiencing paranormal and at the same time provide those they help with an honest service. The team aim to be open-minded to the existence of ghosts, but try not to assume that the activity in question is a ghost or paranormal.
» Watch on YouTube

The Paranormal Scholar is an online paranormal research project and the home of paranormal documentaries, top lists, and true ghost stories, all narrated by Laura Rowton, and produced and researched with her husband, Erik. The channel explores paranormal mysteries and dark histories, including paranormal legends and folklore, demonically possessed people, anomalous experiences, ghosts and poltergeists, and haunted objects.
» Watch on YouTube 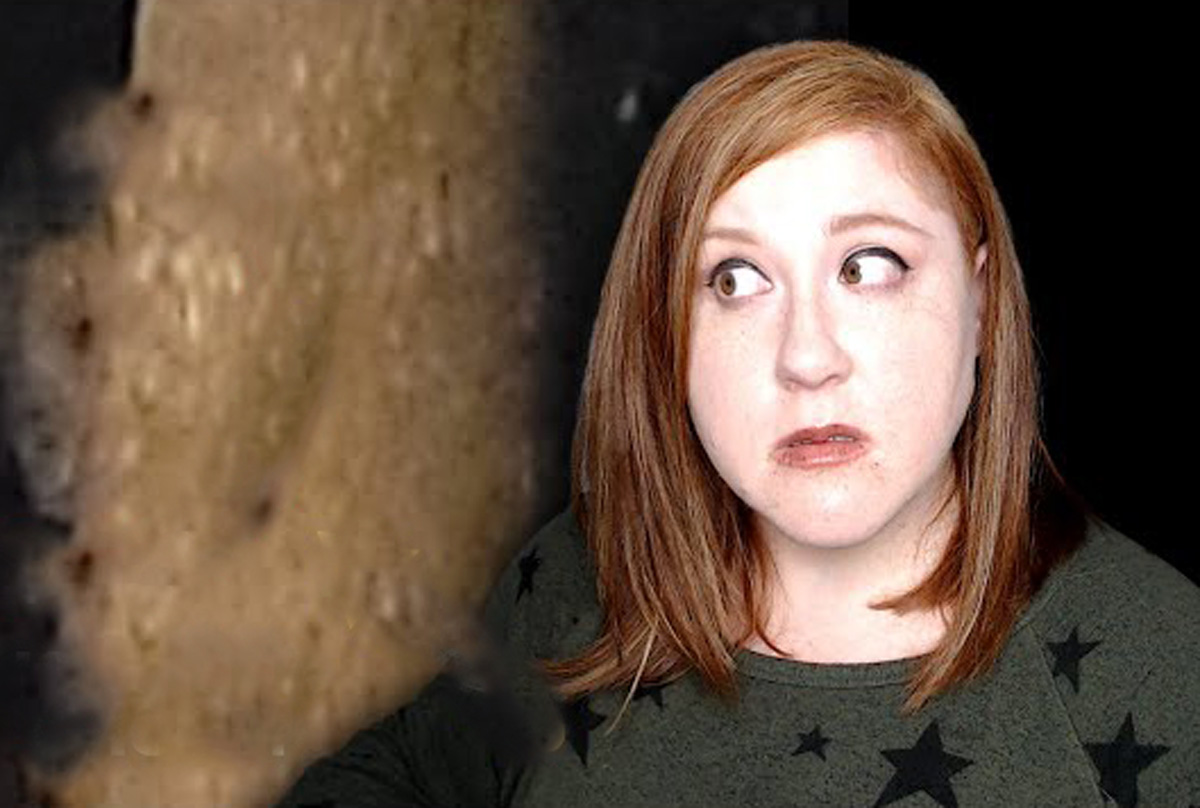 Photo: youtube.com
Alex Matsuo, the founder of the Association of Paranormal Study, is an American paranormal investigator, author and blogger. Her YouTube channel consists of live streams and discussions on various paranormal topics and trends.
» Watch on YouTube 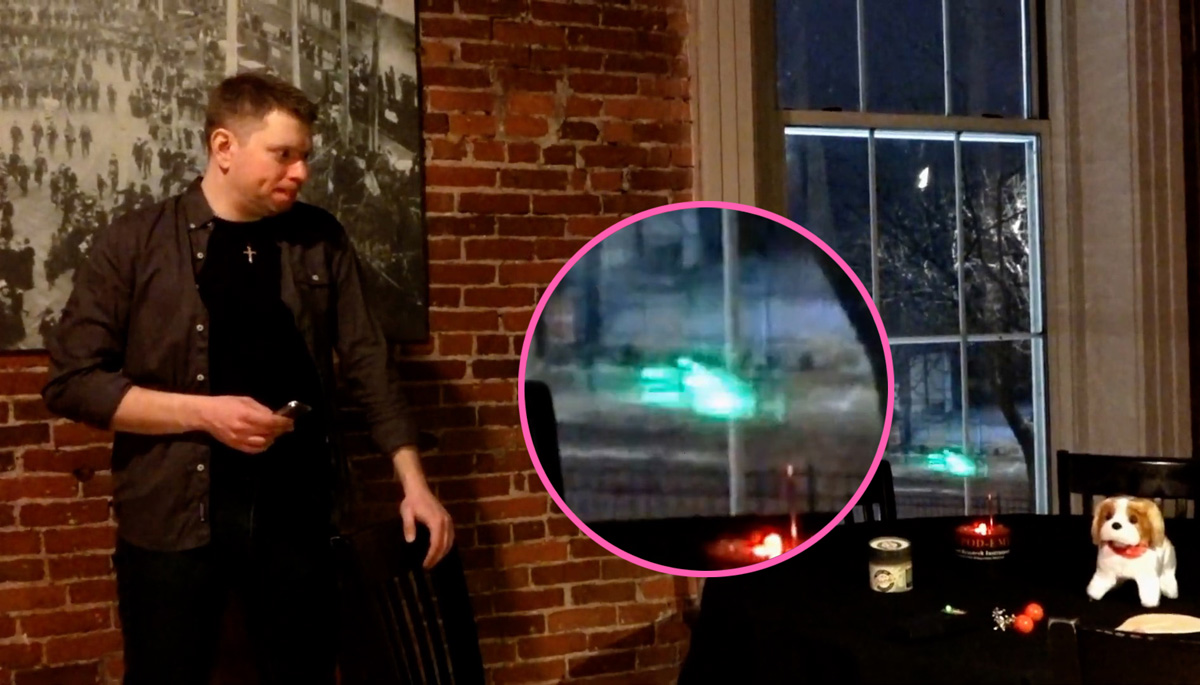 Photo: © Chris Bores
'Ghost Doctor' features Chris Bores, who is the world's first ghost behaviorist. The channel is dedicated to finding that next level in ghost hunting through psychology, sociology, ancient texts and more by using the latest technologies available.
» Watch on YouTube 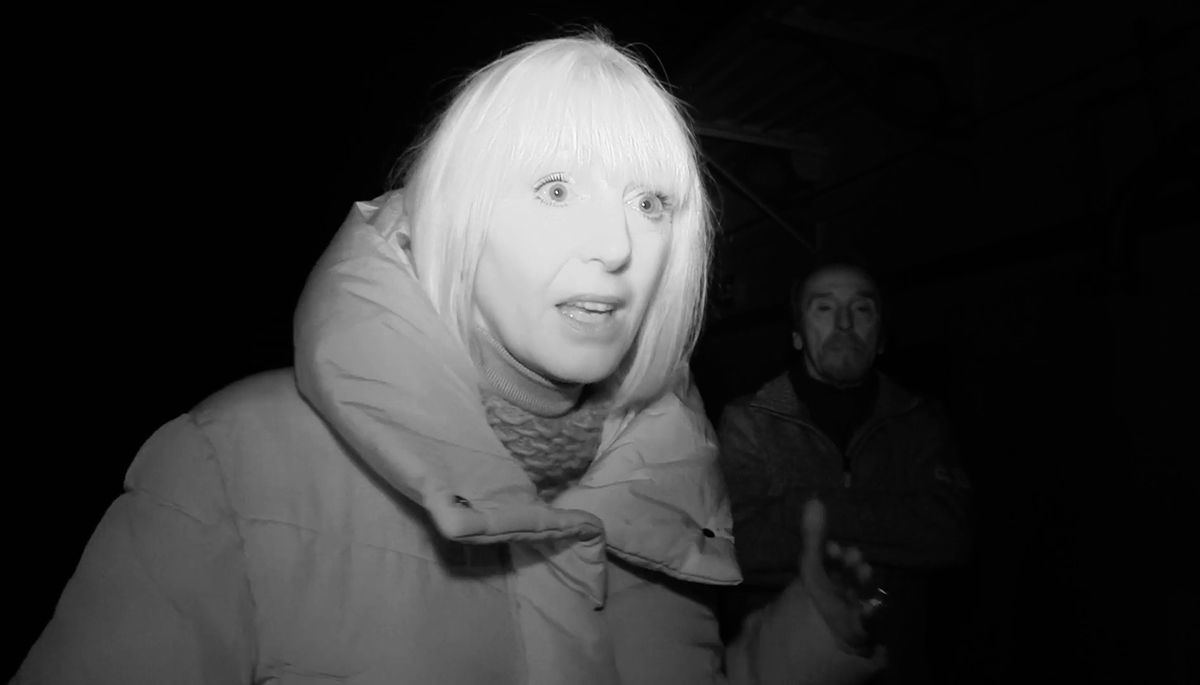 Yvette Fielding and the team of the long-running ghost hunting show, 'Most Haunted', launched their official YouTube channel in 2019. Ever since they've been bringing fans exclusive online content, including coverage of live paranormal investigations, bite-sized investigations, behind the scenes content, and even full 'extra' episodes. At the start of the pandemic, Yvette and her husband Karl Beattie used the channel to keep fans amused while in lockdown.
» Watch on YouTube 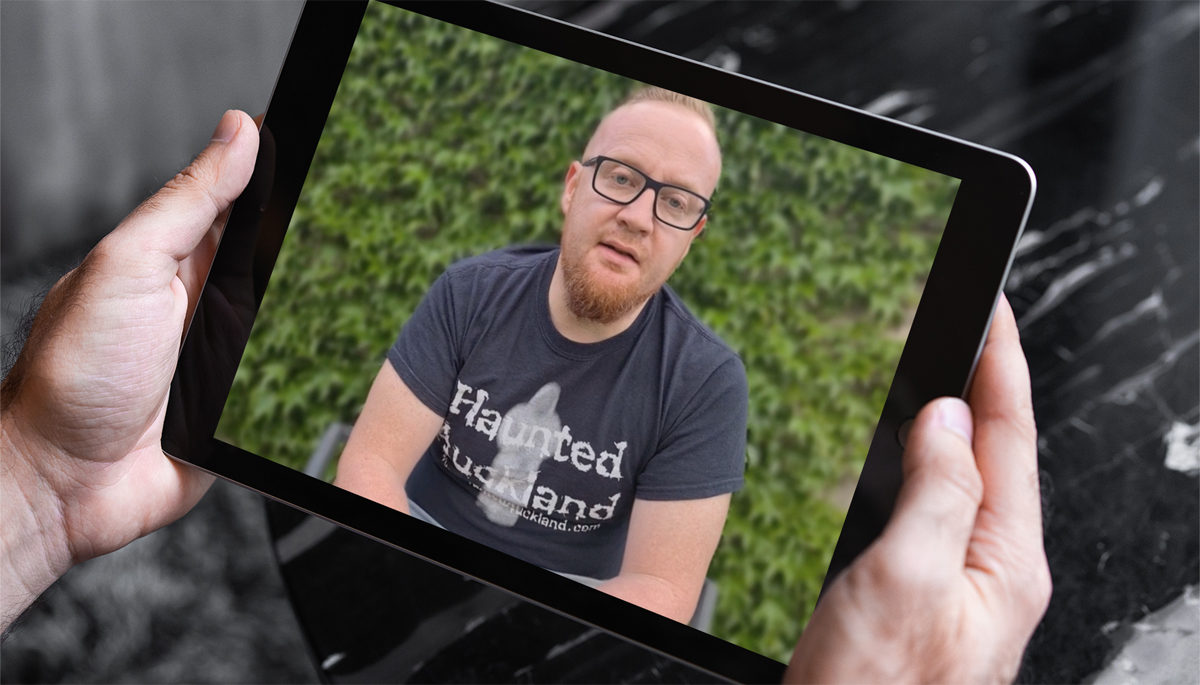 Haunted Auckland is a paranormal investigation and research group from New Zealand. With many years of experience, they've chalked up well over 200 investigative sessions in New Zealand and overseas and have a deep rooted history in the field dating back into the 1980s. From ghosts to cryptids, UFOs to urban legends, we cover the full variety of unexplained activity and phenomena.
» Watch on YouTube

HAUNTD is a free-to-watch streaming platform dedicated to ghost hunting and the paranormal. It brings viewers the best quality, handpicked shows, documentaries and investigations - all of which you can find on the platform's website hauntd.com [https://www.hauntd.com/], but you can also find the best bits of HAUNT's original content, plus trailers and extras on their official YouTube channel.
» Watch on YouTube 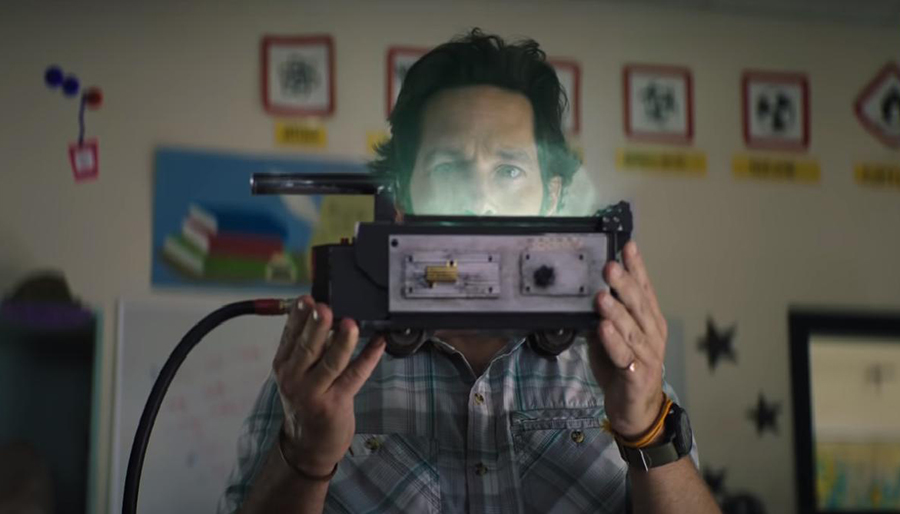 The official 'Ghostbusters' YouTube channel is the place to find the official trailers for the upcoming movie, plus rare exclusive content like television commercials and trailers for the original movies, plus clips of memorable moments from the films, behind the scenes footage, and full episodes of 'The Real Ghostbusters' animated series.
» Watch on YouTube 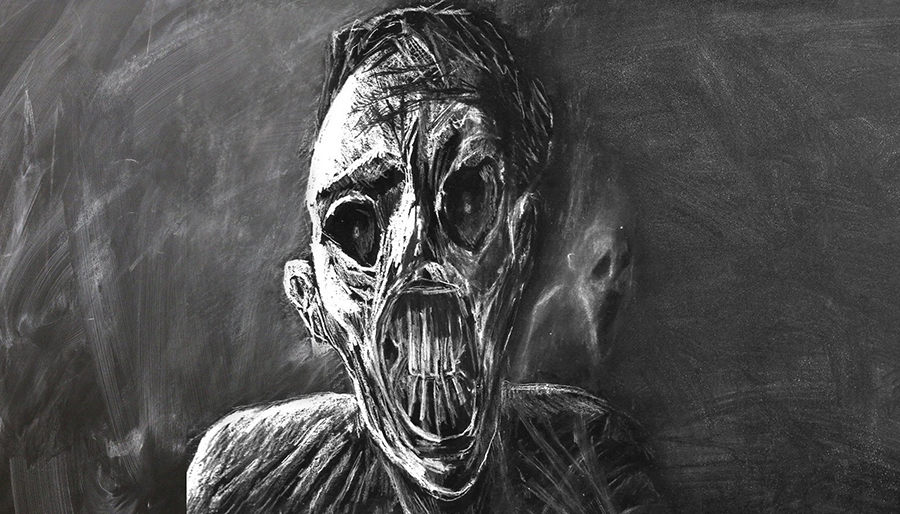 Chills is the place to find weekly list videos covering a multitude of unexplained events, including possible evidence of ghosts caught on camera, mysterious creature sightings, unsolved mysteries, and basically the scariest things ever found online.
The channel is run by a Canadian YouTuber with a distinctive monotone voice named Dylan, he's also the narrator for the channel Top 15s. He says, "my top creepy countdown videos always give an in-depth analysis of scary internet videos that are strange, bizarre, mysterious, and sometimes unexplainable in hopes of determining if said scary videos are real or fake."
» Watch on YouTube


More To Keep You Entertained View All 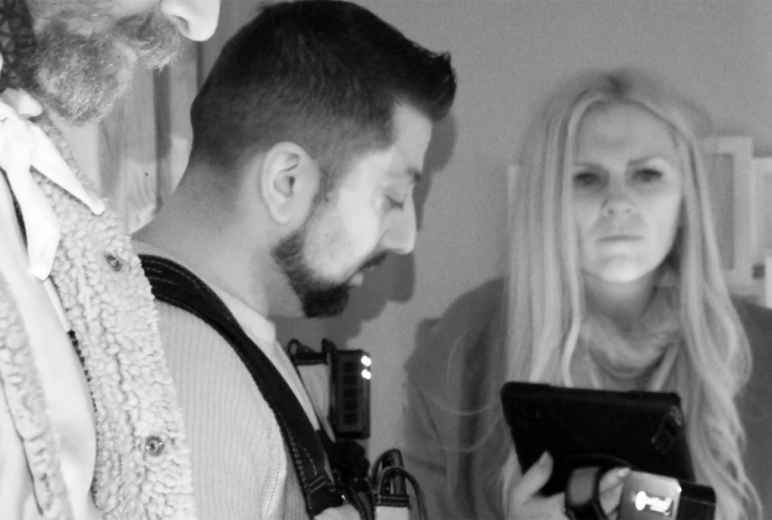 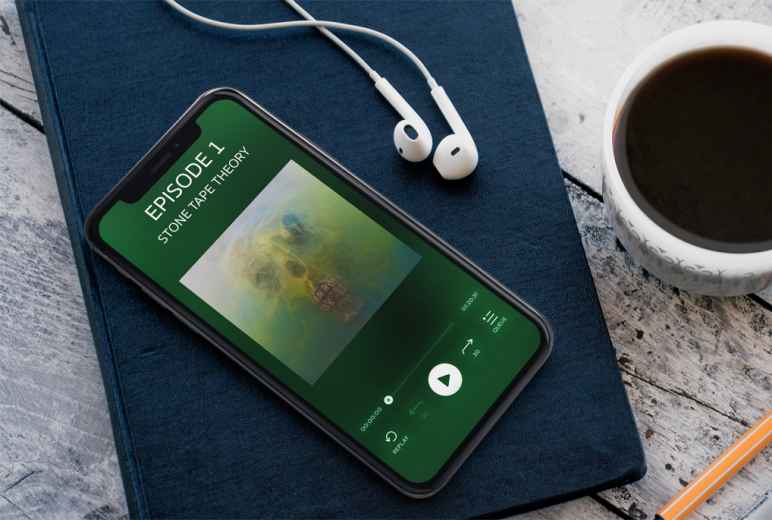 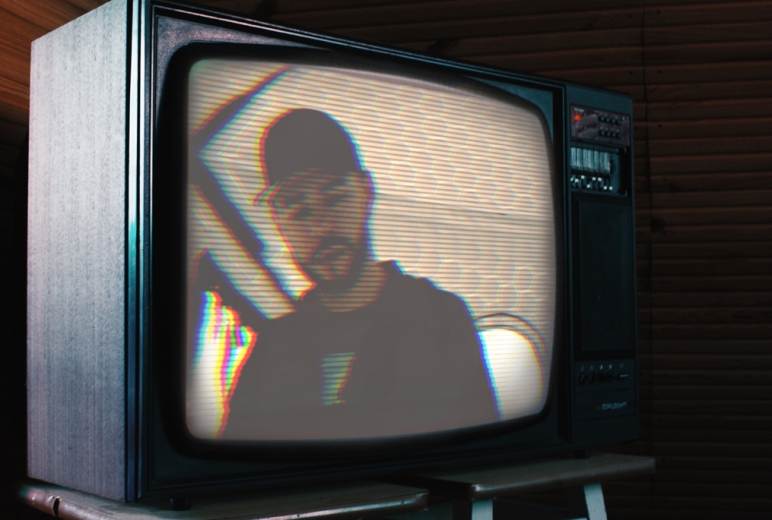 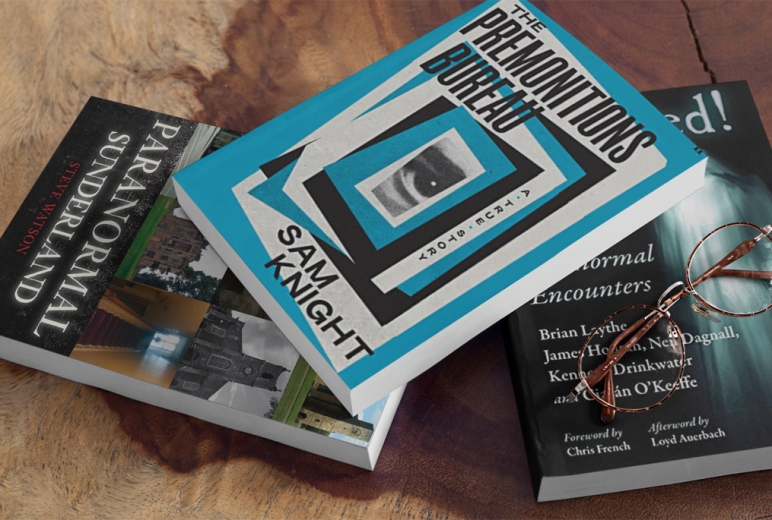